Other than the Luis Suarez years, this could be the best opportunity that Liverpool have had to finish above Manchester United in the Premier League reckoning. Under Jurgen Klopp they have really come fo age so far this term, and some of their performances have been nothing short of sublime.

Seven points taken from Leicester, Tottenham and Chelsea is testament to that, and they have also learned how to ‘win ugly’; a key skill for any side with Champions League aspirations.

Their newly-extended main stand will be in full as the Reds ‘welcome’ bitter rivals Manchester United to Merseyside. This one bears all the hallmarks of an absolute cracker.

The international break finds many club managers adopting the brace position in their office, and the diagnosis for Klopp is not too bad, considering. Gigi Wijnaldum tweaked a hamstring while on duty for Holland against France, but he is the German’s only casualty with Adam Lallana, another injured party, still out from before the international matches. He is said to be 50-50 for the United clash.

It’s not all bad news though. Dejan Lovren and Nathaniel Clyne have both returned to training ahead of Monday’s encounter, and they will be a welcome addition to a Liverpool side that has struggled defensively at times this season. But then if you are averaging 2.50 goals per game at the other end, perhaps that is immaterial….

Here’s the starting eleven that the Kop can expect to cheer onto the field on a raucous Monday evening: 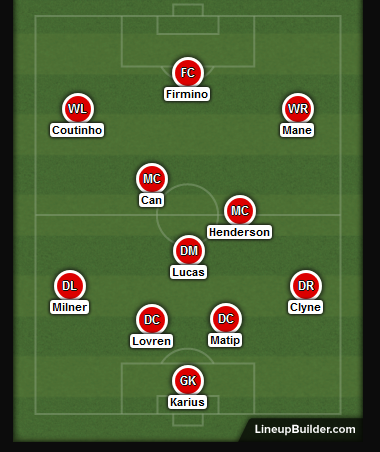 Jurgen Klopp doesn’t seem to be the kind of bloke that would pander to anybody else’s needs, but in the absence of Wijnaldum and Lallana he will need to beef up his midfield given that United will pick any three from Paul Pogba, Ander Herrera, Marouane Fellaini, Daley Blind, Wayne Rooney and Juan Mata drifting in from the right and (probably) Jesse Lingard or Marcus Rashford from the left.

Lucas will offer steel alongside Jordan Henderson, while Emre Can could be in line for his first start of the campaign. Roberto Firmino is likely to get the nod ahead of Daniel Sturridge in attack as he is a hard worker who can drop deeper into midfield when his side don’t have the ball.

Other than that, the Liverpool side picks itself, with Lorus Karius firmly established as Klopp’s shot stopper and James Milner settling nicely into the left back role.

Up and down, is perhaps the best way to describe Manchester United’s form so far in 2016/17. They started well, endured a blip with three defeats in a week (Manchester City, Feyenoord and Watford) and had seemingly come out the other side with a sublime victory over Leicester.

But the 1-1 draw with Stoke last time out highlighted many of their deficiencies. Antonio Valencia is not a defender for one thing, and while they are creating chances putting the ball in the net is becoming a problem; they have scored five fewer goals than their Mancunian rivals and Liverpool after just seven weeks of action.

But there are plenty of positives. The inclusion of Ander Herrera means that Paul Pogba can advance forward, and his link-up play with Zlatan Ibrahimovic and Mata was at times a sight to behold against Stoke. United are getting closer to that complete performance that Jose Mourinho has been craving.

Naturally, there has been more than 150 meetings between these sides over the years, and neither side has really dominated. Manchester United lead the head-to-heads, just, with 67 wins to 56 (45 draws), and they have also won their last four Premier League encounters against the Reds.

And while Liverpool tend to dominate proceedings at Anfield as we might expect – 40 wins to 25 throughout the ages, United have won on three of their last five visits to Merseyside. That sets the scene nicely for what should be a hard-fought and closely-contested affair.

From a goals perspective, nothing much stands out historically. Just 4/10 have witnessed Over 2.5 Goals, and the same amount Both Teams to Score. And we have the feeling that this could be a low scoring encounter too; remember, Mourinho invented ‘parking the bus’, and while he won’t deliberately play with ten men behind the ball (the United faithful won’t allow that), the Special One will surely reign in some of his side’s natural attacking instincts.

Liverpool are dynamic and progressive going forward, but the loss of Lallana and Wijnaldum – the two players in midfield that orchestrate their forward motion – will be sorely felt. Lucas and Can simply won’t operate with such vivacity.

As such, the 21/20 offered by bet365 and others on Under 2.5 Goals is worthy of investment, although matches like this – which feature two ‘local’ rivals – are notoriously difficult to predict. So we have a cover bet: wagering on Liverpool and United to win 2-1 (17/2 with BetVictor and 12/1 with bet365 respectively).

The outright market….is untouchable. We can honestly make a case for Liverpool winning, United winning and the draw. Avoid like the plague.