The frustration around Anfield was palpable. The clash with old rivals Manchester United descended into a classically ‘Mourinho affair’, as we suspected it might in this column, and while we had the bonus of banking a 21/20 winner on Under 2.5 Goals that was scant consolation after watching the Reds struggle to break down a rigid Manchester United rearguard – or ‘bus’, as it is sometimes known.

Still, a point against a side you would expect to be in and around the top four should not be sniffed at – especially with Adam Lallana and Gigi Wijnaldum mostly missing the match through injury, and so attention can now turn towards West Brom this week.

We’re going to come right out and say this….we think the Reds will give the Baggies a good spanking on Saturday. There will be frustration at Monday night that spills over, but also Tony Pulis’ side have got a habit of letting their opponents have plenty of the ball. Against this Liverpool eleven, that could be catastrophic.

The good news to come from the United game is that a full bill of health is restored; we were worried that Loris Karius in goal might have suffered a boredom-related injury, but no he has reported fully fit for training.

Lallana will surely come back into the reckoning – boss Jurgen Klopp admitted that the England international could have started against United, and Wijnaldum has returned to training after his hip injury but may not quite be ready for this one.

Second guessing Klopp’s team selection here is tricky; he will know that his side need to break the Baggies down, and that certain liberties can be taken defensively (although the in-form Nacer Chadli will need to be watched closely). Liverpool could line up like this: 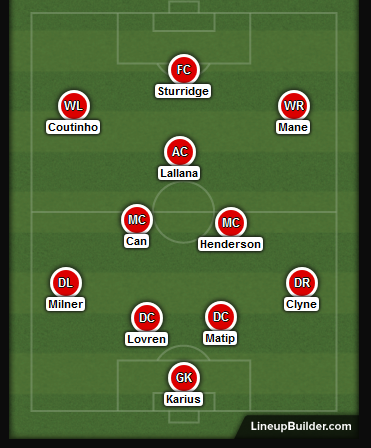 It was noticeable that Roberto Firmino was limping at the end of the United game, and while there may not be anything wrong with him caution could be applied. Also, with Sturridge up front the Reds can play higher up the pitch, which creates space in the middle of the park for Lallana and Henderson, chiefly, to exploit. Coutinho can take up a more advanced role than the one he was deployed in on Monday night, while Can will keep a watching brief on Chadli and link up in attack when required.

Tony Pulis will adopt his usual Mourinho-like bus parking at Anfield, and hopefully the Liverpool lads have learned their lessons from Monday night. This teams election would certainly help them break down a dogged Baggies defence.

It is easy to criticise Tony Pulis and his preferred style of play, but that really does miss the point spectacularly: on a shoestring budget that would make even the most tight-fisted of chairman blush, Pulis has transformed West Brom into a solid mid-table entity, and he deserves enormous credit for that.

Okay, so his brand of football isn’t the prettiest, but there are no prizes in this game for aesthetically-pleasing tactics. Getting points on the board is all that matters to sides like the Baggies.

And they are pretty good at that, too. Just two defeats in eight starts has led them to relative safety in 12th, and clearly the Midlanders are a tough side to beat. They have only lost one of four on the road too.

They have only played two bona fide top ten teams so far in the shape of Tottenham (1-1) and Everton (1-2), so there is a certain vulnerability there.

Take the match against Spurs as an example. Mauricio Pochettino’s side enjoyed 72% possession, and while we know that this particular stat is of little relevance (Leicester City have proven that), if the Baggies give this Liverpool side that much of the ball you’d fancy that they will make them pay.

West Brom haven’t scored more than one goal in a match in 18 attempts either, so the cogs are whirring about which bets to place here. Assuming the Baggies don’t score, the Liverpool -1 becomes a must bet at 4/5.

We’ve had a peek at the Overs market and really there isn’t anything of value there – we were thinking Over 2.5, but with a rough idea of how this one will pan out we can attempt a pair of correct scores: 2-0, which is available at 6/1, and 3-0, backable at 8/1.

So Liverpool are going to net….but who? We are unsure whether Sturridge or Firmino will start, so let’s instead try Sadio Mane at 7/4 in the Anytime Scorer market. His direct style will trouble the sluggish Baggies backline.