We bagged a nice 23/10 winner last week courtesy of the Reds victory and both teams scoring against Crystal Palace, and that is actually a nice microcosm to sum up their season so far: they have no problem putting the ball in the net, but keeping their opponents from doing likewise is proving an issue.

Conceding in nine out of ten premier League starts is the only blemish on what is an otherwise outstanding start to the campaign, and now – approximately a quarter of the way through the season – we must treat Jurgen Klopp’s side as genuine title contenders.

To continue the good times rolling, a very winnable fixture against Watford on Sunday could lift the Reds to the summit of the league table if other results go their way. Heady days indeed.

Can the Hornets spoil the party, however?

While many of their title contenders have been in action in midweek in their various European adventures, Liverpool have enjoyed the luxury of a full week off, and so they should be fresh and prepared for the battle ahead.

Klopp has a full bill of health ahead of the clash, and that continuity of team selection was one of the factors that propelled Leicester City to an unlikely title win in 2015/16; who knows, perhaps lightning will strike twice?

James Milner will return to the side after shaking off a viral infection, and Klopp must be tickled pink that he has a full squad to choose from for this tie in front of a passionate home support. 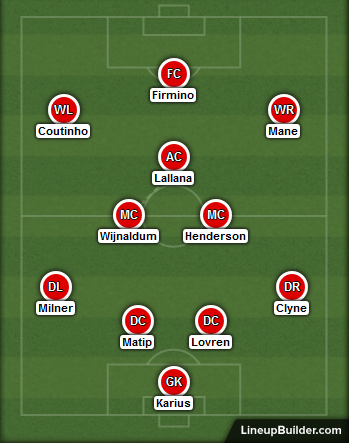 Those good spirits will have been raised even higher by the news that the key Watford triumvirate of Craig Cathcart, Sebastian Prodl and Isaac Success will all miss this Anfield date through injury.

Football is great for offering up ‘stories within the story’, and Watford’s 1-0 win over Hull last week was one such occasion.

The scoreline may read 1-0, but the Hornets actually recorded ZERO shots on target. Not one. Their winner came courtesy of a Michael Dawson own goal, and while they huffed and puffed Watford hadn’t looked like breaking the Hull door down; until that cruel twist of fate in the 83rd minute.

This is a Hull side that had conceded 19 goals in their preceding five games remember, and continues a run of 216 minutes where a Watford player has failed to put the ball in the back of the net. With Liverpool scoring so freely, surely there is only one possible outcome in this match?

To be fair to Watford they have been excellent at the back recently, with three consecutive clean sheets kept. But the absence of Prodl on the sidelines with Cathcart will surely hit them hard defensively, and let’s remember how they seem to struggle when playing against quality sides: defeats to Arsenal, Chelsea and Burnley (they are pretty tasty at home) says it all. All of the Hornets’ last five games have come against sides in the bottom 12 of the division, and that explains their rather false league position at present.

The 4-2 scoreline of Liverpool’s win last week against Palace is slightly misleading: both of the Eagles’ goals came from defensive errors by Dejan Lovren, while the Reds had a stonewall penalty appeal turned down despite replays showing Joel Ward blocking a Philipp Coutinho header with his hand. Woulda, shoulda, coulda….but it could have been 5-0 to the Reds.

Watford have lost their shooting boots at the moment, but they have netted against Chslea, Arsenal and Manchester United this term so are clearly capable. Indeed, the graphic below (thanks, BBC) shows how many chances they created against Hull: they had nine shots from inside their opponent’s 18-yard box. 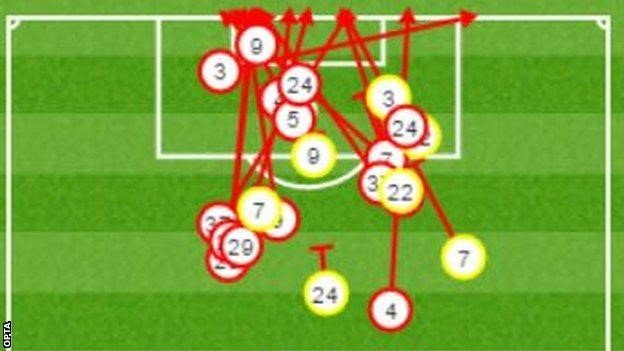 We can’t ignore the fact that Liverpool have conceded in 9/10 matches too, but with the Watford’s key defensive duo of Prodl and Cathcart being out injured we have to go with the Reds to win this match. The 15/8 available on a Liverpool win & Both Teams to Score looks particularly appetising.

When the time comes to pick out an anytime goalscorer selection, we have to play the percentages somewhat, so how is this for a little stat: Saido Mane has scored in each of his last three outings at Anfield. Back the diminutive winger at 11/10 to find the net on Sunday.

By coming to a conclusion that this is a Liverpool win and both teams to score type contest, we have given ourselves some handy clues when tackling the correct score market. Consequently, we’re taking both 2-1 and 3-1 to the Reds at 9/1 and 11/1 respectively.