It’s fair to say that last week’s encounter with Sunderland didn’t quite go the way that we – and many others for that matter – expected. Okay, so Liverpool enjoyed a comfortable enough 2-0 win, but we expected them to create a hatful of chances against the beleaguered Black Cats and perhaps score three or more.

It was not to be, and Sunderland’s recent improvement appeared to be more than a mere flash in the pan. The Reds struggled to break down their deep-lying lines, and the injury to Philippe Coutinho in the first half threatened to overshadow what should really be an easy three points gained at Anfield.

Ironically it was Coutinho’s replacement, Divock Origi, that finally broke the deadlock after 75 minutes, and James Milner sealed the victory from the penalty spot in injury time. It was not the free-flowing, cosmopolitan football we have come to expect from Jurgen Klopp’s side, but a win nonetheless that keeps the pressure on Chelsea and others heading into the crucial Christmas and New Year set of fixtures.

There’s lots still to be done before Santa starts loading up his sack however, and Sunday’s trip to the South Coast to take on Bournemouth is no ‘gimmie’ by any means. Eddie Howe’s side are wildly inconsistent but very much capable on their day of causing a few headaches to any given opposition. And with injuries in and around the camp, Klopp will need to be at his tactical best to ensure the journey home is not a miserable one.

Knocks and niggles: that’s the best way to describe the Liverpool dressing room at present. It is possible that messrs Matip, Firmino, Lallana and Sturridge will be passed fit for Sunday’s outing, but the concern is that if they are not completely 100% then they risk aggravating the injury and spending longer than necessary on the sidelines.

We suspect that Matip and Lallana will start. The former has been a rock at the back, and if he can iron out the occasional lapse in concentration the Reds could have a defensive colossus on their hands. And we’ve seen in the performances against Southampton and Sunderland just how badly Lallana is missed. His creativity and guile links the midfield and forward lines perfectly, and his new-found confidence in front of goal is also an added bonus.

With Coutinho definitely out until the New Year, the Reds are seeking a probing left winger to link up with Firmino/Mane/Lallana etc. The little Brazilian has been an absolute tour de force this term, and his absence will hit hard.

We wonder if Klopp will give Origi the nod from the start. The young Belgian has shown nicely a couple of times from the substitutes bench, and he could theoretically start on the left or play through the middle with Firmino pulling out to the flank. With the Bournemouth backline appearing vulnerable, Klopp may prefer to start with a recognised centre forward – rather than Firmino’s ‘false nine’ offering – here. 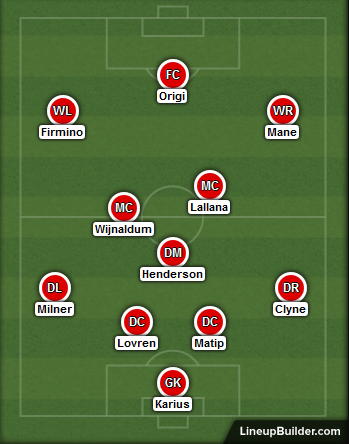 They are a strange side to try and second guess are Bournemouth. Their return this season – W4 D3 L6 – highlights their inconsistency, and they do seem to go on little streaks of good and bad form.

The Cherries have lost three of their last four against an eclectic trio of sides in Middlesbrough, Sunderland and Arsenal. Since the start of the season they have lost two in a row, gone W1 D1 L1, then were unbeaten in four and have since lost three in four. Answers on a postcard regarding Eddie Howe’s side’s next move.

They’ve been respectable at home, with victories over Hull, Everton and West Brom masking defeats to Manchester United and Sunderland. Against the better operators in the Premier League, Bournemouth are W0 D1 L3 this term (a draw with Spurs, defeats against both Manchester sides and Arsenal). If we are putting Liverpool in that same bracket, then we must surely fancy ourselves for the victory.

As we’ve seen, trying to predict the outcome of a match in which Bournemouth are involved is fraught with risk; they can be both sublime and ridiculous (sometimes within the same 90 minutes!).

If we assume that Liverpool come into this match at full strength – bar Coutinho, then the good news is that Bournemouth do look vulnerable to enterprising attacking play. They conceded three against Manchester United and Arsenal and four against Manchester City, so clearly their backline can be exploited. It’s quite possible that playing on the counter attack doesn’t suit them, as they themselves are a side that likes to keep the ball and recycle possession, and against the Reds they can expect to spend plenty of time on the back foot.

The bookmakers’ odds on a Liverpool victory – 8/11 – are fair and representative of our chance of winning. Much will depend on team selection, with Lallana and Firmino passing fitness tests, but if they do then the Liverpool win looks the most likely outcome here.

It may be a lower scoring affair than many anticipate, however. Only 6/13 Bournemouth matches have witnessed Over 2.5 Goals, and while the Reds have a penchant for putting the ball in the net they did fail to score for 165 Premier League minutes (the goalless draw at Southampton plus the 75 it took to bag against Sunderland), and so we have to assume our attacking play has peaked somewhat – although that’s not to say we won’t score at least once here.

All of the above offers punters an outstanding opportunity to Dutch the correct score market: 1-0 and 2-0 to Liverpool can be backed at 9/1 and 10/1 respectively.