Once again, it was basic defensive errors that snatched indignity from victory for Liverpool, and Jurgen Klopp must be having sleepless nights at the thought of the four points lost in his side’s last two outings.

Just seven days after throwing away a seemingly unassailable lead at Bournemouth – aided and abetted by some hideous defending and goalkeeping, the Reds conspired once more to throw away key points in the battle for the Champions League places by handing West Ham the brace of goals that would secure them a 2-2 draw and a share of the spoils.

Adam Lallana’s neatly taken goal had given Liverpool the early lead, and many were left wondering how many a rampant Reds side would win by, rather than if they would win.

But then Lorus Karius got his positioning all wrong at a Dimitri Payet free kick, and was thus unable to get a strong enough hand on the ball to prevent the Frenchman’s strike hitting the back of the net. Just ten minutes later Dejan Lovren was slightly culpable for the misplaced header that allowed Michail Antonio to sneak in and fire the Hammers in front.

Divock Origi bagged his fourth goal in four games to bring the Reds level, but for all our possession there was a distinct lack of end product; as a return of just three shots on target suggests.

West Ham keeper Darren Randolph made a fine save late on as Liverpool pushed for a winner, but in truth a draw was probably a fair result in terms of moments of enterprise in the attacking third.

Much improvement will be needed on Wednesday night with the visit to Middlesbrough. The Boro are getting the points that their performances deserve at the moment, and with five of their last six outings witnessing two goals or fewer it goes without saying that this could turn into a tight and conservative scrap – hardly ideal for this free-flowing Liverpool side.

Klopp was very forthcoming in Monday’s press conference about the fitness of two of our players: Dejan Lovren and Emre Can.

Lovren came off at half time against the Hammers, although it is believed that the extent of his ‘injury’ is only cramp and as such he will be fit for Wednesday.

The prognosis for Can is not so good, unfortunately, and knee ligament damage means he won’t be back until the Everton match at the earliest.

So the starting line-up from Sunday may not witness any enforced changes, but it might just be the case that Klopp shuffles his pack somewhat. The most likely casualty is Lorus Karius, who for the second week running was at fault for a goal conceded. In these instances it is usually the sensible option to take the goalkeeper out of the line of fire, so Simon Mignolet could return.

We can only speculate about Lovren’s fitness at this stage, but it might be worthwhile giving the big Croat a rest anyway. Middlesbrough don’t offer particularly much in the final third, and so bringing in Ragnar Klavan, rather than Lucas, at centre back might be the play.

With the Everton match not taking place until next Monday, that gives the players more time to recover, and so Klopp may be tempted not to tinker with his midfield or attack too much; five goals scored in two starts suggests there’s no reason to change things up there. 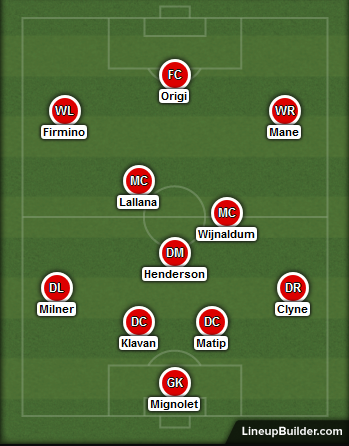 When you look at Middlesbrough’s goals for and goals against columns, you get a sense of the picture unfolding almost immediately.

Having netted just 13 goals, the Boro are – statistically at least – the Premier League’s worst attacking side. But at the other end, their defensive return of 16 goals conceded means that at the back they are more secure than Manchester City (19), Everton (19) and, yep you guessed it, Liverpool (20).

You only have to look at the results they’ve earned against Arsenal (0-0), Manchester City (1-1) and Chelsea (0-1) to see that they are better off trying to shut matches down against the big sides, and that is exactly what they will attempt to do against Liverpool.

But for all our faults of late we haven’t diminished in an attacking sense (seven scored in three matches), so surely we will eventually be able to unlock the door to goal.

Given our defensive woes of late, a game against shot-shy Middlesbrough could not be better times, and really the emphasis here is on whether Liverpool can break down this dogged Boro rearguard.

To go along with that wager, we then have to follow up with a pair of correct score punts: 1-0 and 2-0 to Liverpool are available at 7/1 and 15/2 respectively.

The last selection is one of odds chasing, but it does fit the narrative of our expectations for this match. Both Teams to Score (No) at odds-against (11/10) has to be taken.