Life: it gives with one hand and often takes with the other. When Liverpool defeated Manchester City 1-0 on New Year’s Eve, many felt that that was going to be their breakthrough moment; the moment they realised that ‘yes, we are genuine title challengers.’

The Reds played the Citizens off the park, and while glorious chances were few and far between it was once again a tactical masterclass from Jurgen Klopp that enabled his side to close down space and prevent City creating any openings for Sergio Aguero and co. It was an excellent performance from the boys, and confirms our status as one of the very best sides in the Premier League. Indeed, as the BBC pointed out, ‘since his appointment in October 2015, Klopp has faced a total of 13 Premier League games against Arsenal, Chelsea, Manchester City, Manchester United and Tottenham. He has lost only one.’

The fans could have been forgiven for supreme confidence ahead of the trip to beleaguered Sunderland then, although it soon became clear that complacency could be the Reds’ greatest enemy this term.

Two moments of sloppiness – Ragnar Klavan’s lazy trip on Didier Ndong and Sadio Mane’s handball – gifted Sunderland a pair of spot-kicks which were expertly despatched by Jermain Defoe, and condemned Liverpool to a 2-2 draw and two points dropped. Happily, Chelsea’s defeat at Spurs has helped to redress the balance somewhat.

Perhaps a welcome distraction from league action this week comes in the shape of an FA Cup Third Round tie with Plymouth, a side going pretty well in League Two but one that the Reds will expect to beat comfortably enough even allowing for a few changes in personnel.

Second guessing any team selection at this time of year is tricky; with so many games played over the festive period there are sure to be some weary legs in the squad.

There are a few definite absentees, with Mane jetting off to the African Cup of Nations and Jordan Henderson still recovering from that heel injury. There are question marks against the names of James Milner and Joel Matip, again with injury, while Philipp Coutinho is still rates as a doubtful starter despite upping his rehab recently. Daniel Sturridge should have shaken off his ankle knock, but whether he gets the nod or not here remains to be seen.

These cup ties are an excellent opportunity to blood young players, and Klopp is a known fan of Trent Alexander-Arnold, Ovie Ejaria and Kevin Stewart, so it wouldn’t be a surprise if they started. Klopp fielded a youthful side against Spurs in the EFL Cup last 16, and will not be afraid to do so again here. 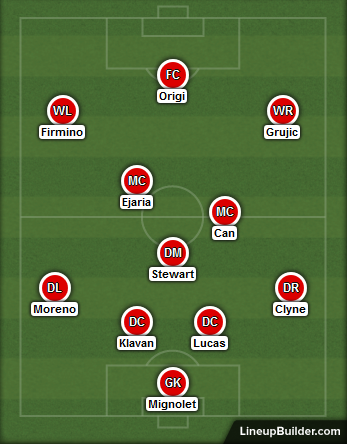 It’s all relative of course, but Plymouth have been going along rather nicely in League Two.

They currently sit in second place in the table, and boast an excellent away record (W8 D0 L3).

But the last couple of months have witnessed something of a slide, starting with a heavy 0-3 defeat at home against Grimsby on November 19. Since then, their league record reads W4 D1 L3 – not bad, but not ideal preparation for a trip to Anfield.

This will be the biggest day of many of the Argyle’s players’ lives, and we won’t know if they are to sink or swim until the game gets underway.

How will Plymouth approach this game? Surely they will try to defend in numbers and keep out the Reds – the financial incentive of a replay at home is too much to ignore. They will show very little going forward, you wouldn’t think, and that will play nicely into Liverpool’s hands.

One thing that is great about playing kids is that they never show anything less than 100%, and that kind of application will be needed to see off what should be a competitive opponent. The blend of youth with experienced players with a point to prove – think Alberto Moreno, Lucas and even Divock Origi – should be a winning one.

It’s no surprise that the Reds are red-hot favourite and at a best price of 2/11 they only offer a minute amount of value to an acca; they are clearly unbackable as a single. As a way of squeezing a bit more value out of the tie, the Liverpool -1 handicap is an excellent proposition even at an admittedly short price of 1/2. The Pilgrims have conceded in 11 of their last 14 League Two matches, which suggests they are vulnerable defensively even if they do park the bus at Anfield on Sunday lunchtime.

Outright value is so hard to find in these kinds of matches, and the very best you can do really is take the Liverpool Win & Over 2.5 Goals market at 4/7.

The best avenue of attack appears to be the Anytime Goalscorer market, and even that is fraught with danger: odds will tumble in the wake of the team news being announced. Trying to pre-empt Klopp’s selection is a gamble, in all sense of the word, and so trying your hand early on Divock Origi (10/11), Roberto Firmino (5/6) and Marko Grujic (7/2) early could be the smart route to betting success.