With the 2-3 defeat to Swansea fresh in the memory – and the knowledge that Premier League leaders Chelsea are now ten points ahead in the race for the title – this EFL Cup semi-final tie with Southampton has taken on extra significance for Jurgen Klopp and Liverpool.

It could well represent the Reds’ best hope of silverware in 2016/17, and the reality is that even with a 0-1 deficit from the first leg, the Merseysiders are still favourites to progress.

The concern is that if the Saints do manage to nick an away goal, Liverpool will need to score three to win the tie; not impossible by any means, and with Jose Fonte sold to West Ham and Virgil van Dijk likely to miss the game through injury, Southampton are short of options in central defence. Klopp will be giving this both barrels, you can rest assured of that.

There are reports that the German held some kind of ‘crisis’ meeting after the Swansea game, but it wouldn’t have been a teacups flying, raised voices, fist through the door kind of affair; that’s not his style. Instead, it would have been a diplomatic, mostly positive meeting – the kind that improves morale and leads to improved performances. The Reds will be gunning for Southampton in front of a packed Anfield, and with a Wembley date just 90 minutes away we can expect a thrilling spectacle.

Saturday’s FA Cup clash with Wolves is something of a minor irritant – especially with a Premier League tie with Chelsea to come next Tuesday – and so we’re expecting a strong side to take to the field against the Saints before the youngsters and fringe players take their place at the weekend for the clash with the Championship outfit.

The only likely absentee from what we would term Liverpool’s strongest side is Jordan Henderson, who continues to battle that recurring heel injury. He will surely be saved for the Chelsea date, and so Emre Can is the most likely deputy here.

Klopp will know that a goal from Southampton would make his team’s night rather more difficult, so he won’t be going completely gung-ho here. Lorus Karius is the designated cup keeper so will presumably play, but otherwise a full strength back four is likely to be selected. 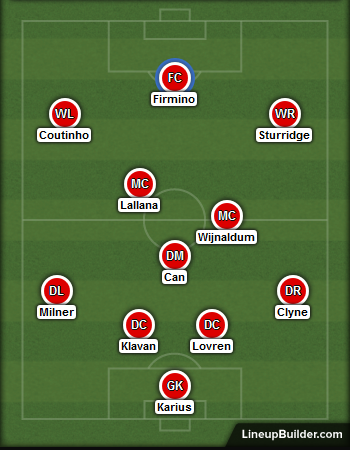 It has been a rather lean time for Southampton of late, and while they have been okay in the cup competitions – defeating the Reds and squeaking past Norwich in 180 minutes – their form in the Premier League has been woeful.

Let’s not read too much into their 3-0 victory over Leicester on Sunday – the champions were absolutely atrocious, and while that result did bring an end to a run of four straight defeats let’s be honest and say that the Saints were never tested by the Foxes.

Without the injured Virgil van Dijk and Charlie Austin, and the now departed Jose Fonte, we can expect the Saints to be a very different proposition than the side that played such eye-catching football in the early part of the season, and even with a one-goal deficit we have to say that it is still advantage Liverpool in this tie.

There are a number of permutations to this game, and the strategic set-up of both sides will help to inform how this clash is likely to pan out.

The Saints will field a defence-minded midfield and presumably play either Jay Rodriguez or Nathan Redmond as a ‘false nine’, with the aim of packing the midfield and closing down the space afforded to Liverpool’s more creative talents.

The Reds, for their part, would surely be happy with a 1-0 win through 90 minutes – they certainly won’t want to concede a goal, and so a stodgy, largely risk-free encounter is expected. Consequently, Under 2.5 Goals at 21/20 is our first foray into the market.

Without Fonte and Van Dijk, Southampton’s defensive options are limited, with Yoshida and A.N Other likely to step into the breach. The most obvious recipient of such good fortune is Roberto Firmino, who we suspect will play through the middle as per usual. Any quote of around the 7/5 mark – anything odds-against for that matter – seems more than fair given the Brazilian notched a brace at the weekend and seems to do his best work at Anfield.

When the dust has settled, we expect Liverpool to have too much firepower for an under-strength Southampton. We’re expecting a low-scoring affair, but we won’t tackle the correct score market as frankly there is enough value in the 10/11 available on Liverpool to win by any means necessary.