We had suspected that Jurgen Klopp might field an experimental side for the FA Cup clash with Plymouth on Sunday, but boy we did not expect the eleven he did put out. The youngest team in Liverpool’s history took to the Anfield turf, and while the performance of the young guns and fringe players was encouraging enough the 0-0 stalemate was a less than satisfactory result.

Klopp is in a similar quandary this week, with an EFL Cup Semi-Final date with Southampton on Wednesday something of a distraction given the not-small matter of a trip to Old Trafford on Sunday.

Naturally, the German will want to reward the Reds faithful for their loyalty with a trip to Wembley, but you suspect three points in United’s backyard would be even sweeter. That thought process may inform his team selection once again this week.

In a press conference on Monday the German intimated that Lorus Karius will start again in goal, while the big news is that Philippe Coutinho could return to the squad for the first time in three months. What a fillip that would be.

There was no real indication of Klopp’s intent in terms of winning the EFL Cup as opposed to his motivation for winning on Sunday, but we suspect he will pick a side that aims to pick up a draw at St Mary’s on Wednesday and thus keep the Reds in the driving seat heading into the second leg.

The news that Coutinho is nearing a full return to fitness is a huge relief; he adds an extra dimension in attack and was part of the Liverpool side that looked unbeatable earlier in the campaign.

Klopp confirmed the good news in that press conference. “I think Phil is fit enough for being part of the squad,” he said.

“That means it could be minutes, how much I don’t know. It depends on the game, of course. He is on a very good way.

The boss was also asked about the fitness of another trio of key players – Jordan Henderson, James Milner and Joel Matip – who have been nursing injuries of late. “All good,” Klopp said. “No new injuries, and all the rest are on their way back. How close? It’s different.

“Joel, first steps, if you want, in team training. Millie, no issues anymore. Hendo, on a very good way, because he is a really mentally strong guy.

“It’s still painful, I think, but he is doing well. We will see what we can do with him. Hopefully, Thursday [he’ll be in] team training.”

So we wouldn’t expect Matip, Milner or Henderson to feature here with that trip to Old Trafford on the horizon. 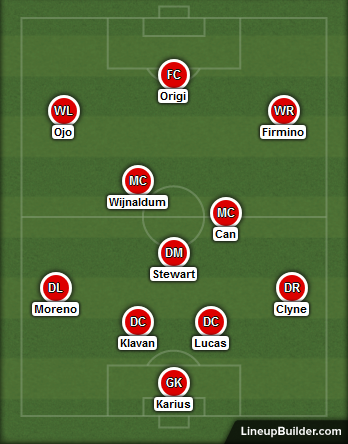 It hasn’t been the best of times for Southampton of late, with three consecutive defeats in the Premier League and a frustrating 2-2 draw with Norwich in the FA Cup on Saturday. They twice went ahead, but a 90th minute equaliser from the Canaries piled on further misery for the Saints.

It has not been plain sailing off the pitch either. The injury to Charlie Austin was a huge blow to the Saints’ hopes this term, and his absence has meant goals have been rather harder to come by. Further bad news came at the turn of the year with the revelation that club captain Jose Fonte had handed in a formal transfer request. Dropped on Saturday, he is unlikely to feature again for the club.

With nothing going on in the Premier League, the EFL Cup has provided a welcome distraction for the Saints, with victories over Crystal Palace, Sunderland and Arsenal up until this point highlighting how seriously they are taking the competition. They will be up for this tie and no mistake.

And here’s where it gets tricky: we have no idea what kind of side Klopp will pick with an arguably more important visit to Manchester coming up on Sunday. This selection will surely determine the outcome of the game.

Southampton will give it both barrels and pick their strongest side, and for that reason we are slightly leaning towards the hosts to win this opening leg. But, clearly, Klopp has a lot of quality to choose from, and should be able to field a side capable of being competitive against a down-on-their-luck Southampton outfit.

A feature of Liverpool’s play this season has been shipping goals on the road – 16 in 11 on their travels in the Premier League. The likelihood of a repeat increases if Matip and Dejan Lovren are unavailable, and with the firepower available to the Reds also being a factor with Fonte absent we’ll have a flutter on Both Teams to Score at 7/10.

There’s precious little else to work with in the ay of betting value here, but a small wager on the 1-1 correct score at 6/1 should keep us interested for much of the match.