If ever a team was set up to play into their opponents’ hands then it was Liverpool against Leicester on Monday night. Why Jurgen Klopp decided to implement a high defensive line against an outfit containing the guile of Danny Drinkwater and Riyad Mahrez, plus the pace of Jamie Vardy, is anybody’s guess. The 1-3 scoreline speaks for itself.

The selection of Lucas at centre back has attracted plenty of criticism but he was outstanding against Tottenham in our prior engagement, and so the Brazilian is not to blame. It was the amount of space behind him that Vardy had to run into that was the Reds’ ultimate downfall in the Midlands.

In fairness it was a bad night overall. The loss of Jordan Henderson in midfield was a bitter blow, and it is perhaps coming clearer that Emre Can, at this time, isn’t quite ready to be an elite-level midfield operator. There was no spark in Leicester’s third of the pitch, and for a side that has been conceding goals so liberally of late that was a real disappointment. Sadio Mane took a quick from Vardy early on that seemed to slow him down, while Philippe Coutinho and Roberto Firmino were largely anonymous.

Yes, a positive reaction was expected from Leicester following the dismissal of Claudio Ranieri, and yes they did put in a performance worthy of Premier League champions. But that is no excusion for Klopp’s basic tactical oversight at the back and a lack of creativity and craft on the part of his players.

Before this runs the risk of becoming a wholly negative diatribe, let’s look forward. This week’s opponents Arsenal, who visit Anfield on Saturday tea time, have a Champions League clash with Bayern Munich on Tuesday to prepare for. Their chances of progressing are slim to zero after the 1-5 thrashing in Germany in the first leg, but Arsene Wenger will want his side to win the second leg at least to restore some pride. That plays into our hands.

We mustn’t forget that the Gunners have only won 50% of their away games this term, and while we have had our faults of late a run at Anfield of W8 D3 L1 stands up to scrutiny. Heart must be taken from our 2-0 defeat of Spurs last time out on home soil as well.

So it’s been a week that started with a myriad of negatives; let’s hope it can end on a high note.

The bad news for Liverpool is that it appears Jordan Henderson will not be fit enough to return to the starting eleven on Saturday. When quizzed about his captain’s fitness, Klopp answered in rather agitated fashion. “What does ‘long term’ mean?” he asked when probed about the length of Henderson’s absence.

“[He’s had] a couple of games [out], already two. It looks like he will not be ready for Arsenal, that’s how it looks but I’m not sure, we will see.”

Dejan Lovren has returned to training this week following his knee injury, and if fit enough will surely return to the heart of the defence; with Lucas perhaps taking on the Henderson role in place of the below-par Emre Can.

Daniel Sturridge will also return to the squad after illness. 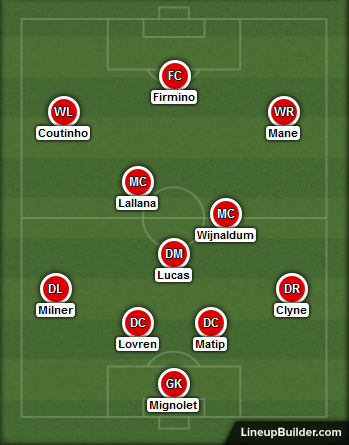 To be honest Arsenal have done what they always tend to do: start well, get into the title picture before dropping surprise points and drifting away again.

After their opening day defeat to the Reds they then went 14 unbeaten to put themselves in the frame, but four losses in ten since have consigned them to battling for a top four finish once again.

Most notable is their struggles when playing the elite sides away from home: since the start of December they have tasted defeat at Everton, Manchester City and Chelsea. Do we put Liverpool in that category? At their best, certainly.

The fact that they will travel without Santi Cazorla, Aaron Ramsey and Mohamed Elneny makes life harder, and Mesut Ozil was sent home from training on Wednesday with illness.

There are positives and negatives to both sides here, and when you put all of those in a great mixing bowl neither outfit particularly stands out.

Liverpool are generally excellent at Anfield but without Jordan Henderson they simply aren’t the same side. Arsenal, meanwhile, have key players absent, a Champions League game 72 hours after this fixture and tend to struggle in away matches against good sides. But then they have scored in 92% of their matches on the road, and that makes them a tough proposition to beat.

So with that in mind the draw (13/5) looks to be the most logical outcome; pinning your colours to the mast of either of these sides is fraught with danger.

We’re certainly anticipating a score draw, and that feeds nicely into a couple of correct score wagers: 1-1 and 2-2 at 13/2 and 14/1 respectively.

Both teams to score looks a nigh on certainty, so to add some decent value to our portfolio of bets let’s add BTTS & Over 2.5 Goals at a fair price of Evens.

Post Tags:
Homepage » Match Previews » Liverpool vs Arsenal Betting Tips (04/03/17) – Don’t Expect the Reds to be as Bad as They Were Against Leicester!