It wasn’t the most devastating of displays, but the fact that Liverpool were able to claim their first win of the Premier League campaign on Saturday, while resting players ahead of this clash with Hoffenheim, is pleasing.

Jurgen Klopp opted to bench Dejan Lovren, Emre Can and Mo Salah against Crystal Palace, and left Alberto Moreno out of the squad all together, and after witnessing his side fire in fifteen shots at the Eagles’ goal – eight on target – the German must have been wondering what he’d done.

But Sadio Mane, as he so often does, popped up with a 73rd minute winner, and while Christian Benteke missed a glorious chance for his customary goal against Liverpool, it was plain sailing enough for the Reds to send everyone home happy.

Indeed, the quality of some of the individual performances on show might just have given Klopp food for thought ahead of Wednesday’s visit of Hoffenheim for the second leg of the Champions League qualifier.

A first clean sheet of the campaign came with Ragnar Klavan and Andrew Robertson in defence – the latter in sparkling form going forward as well, Daniel Sturridge showed flashes of his very best while James Milner was composed in midfield.

It’s a selection headache for Klopp, but as the old saying goes in football those are the best ones to have.

With what is in essence a two-goal lead from the first leg given the brace of away goals netted, Klopp needs not worry about changing his system or personnel – the ball is firmly in Hoffenheim’s court as far as forcing the issue is concerned.

So it will be a case of Liverpool fielding their strongest side and letting the Germans take matters into their own hands. But what is that strongest side?

Will Klopp hand a Champions League debut to Robertson? He must surely be tempted, although after resting Moreno at the weekend presumably the manager will bring him back in – as he will Lovren and Trent Alexander-Arnold to replace Klavan and Joe Gomez respectively.

Emre Can has been excellent for the past few months in a red shirt, and he will presumably come straight back into the starting eleven at the expense of James Milner; although the latter’s stabilising influence could come into play from the substitutes bench.

Sturridge will be unlucky to find himself on the bench as well, but the front three of Mane-Firmino-Salah has been in tantalising form so far and there is no reason to break up that holy trinity. 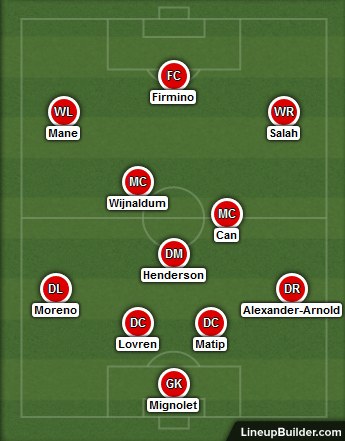 Hoffenheim got their Bundesliga campaign off the ground with a 1-0 win over Werder Bremen, but in the first leg of this tie they only showed glimpses of the kind of quality that might hurt Liverpool.

The Germans missed an early penalty and watched as Simon Mignolet made a couple of good saves, although their late goal through Mark Uth did come as something of a shock.

The Reds were brilliant going forward, and really could have scored more than the two they did net – Firmino and Salah both missing decent chances to put the tie to bed.

Even without Lallana and Coutinho the visitors were able to conjure up chances, and given Hoffenheim’s outstanding home form you would have to suggest that the hardest part of the job for Liverpool is over.

The very nature of this tie points towards goals. It is finely balanced, but let’s not beat about the bush: Hoffenheim need to score twice to even give themselves a chance of progressing to the Champions League proper.

That plays into Liverpool’s hands, who even have the rare luxury of being able to play on the counter attack if they so choose. If Hoffenheim push bodies forward, that Liverpool front three we’ve mentioned could cause havoc on the break.

The Reds have conceded against Watford and their opponents here this term and should have leaked against Crystal Place but for Benteke’s glaring miss. So goals is the key for punters here: Over 2.5 & Both Teams to Score at 4/5 is a firm foundation to start with.

From there, the Anytime Goalscorer market has to be plundered given that we have a decent idea of the two starting elevens. Daniel Sturridge is the shortest price at 6/5, bizarrely, but we’re more interested in Sadio Mane (11/8) and Mo Salah (7/5), both of whom are available at enticing prices.

It might just be that the first period is cagey, with neither side wanting to show their hand too early, before the second half explodes into life as Hoffenheim search for their required goals. It’s a long shot, but the Draw/Liverpool half time/full time scorecast looks intriguing at 17/4.