There is no better combination in football than contributing to an outstandingly entertaining game of football and still coming away with the three points. That’s exactly how Liverpool’s trip to Leicester City played out on Saturday, and in a match that panned out almost exactly as the Foxes would have liked it to – hectic, manic and pretty much out of control – it was very pleasing to see the Reds come up with moments of quality at key times.

Those moments include Philippe Coutinho’s sublime free kick which gave his side a two-goal cushion and Simon Mignolet’s penalty save from Jamie Vardy – he was unlucky to give the spot kick away in the first place after seemingly making contact with the ball in a coming together with the England frontman.

In his post-match interview Jurgen Klopp was effusive in his praise for his players, and rightly so: they showed plenty of character against a home team who have swept aside many others in such chaotic games of football as this one.

Another titbit that Klopp revealed in that interview was that his side don’t fly out to Russia until Monday for their Champions League match against Spartak Moscow, which takes place on Tuesday evening.

That does not seem very long for his players to acclimatise to conditions in Moscow nor their opponents’ plastic pitch at the Otkrytiye Arena. Okay, so it’s not like the old-fashioned Astroturf surfaces used by the likes of Luton and QPR in the 1980s, but it is still an artificial substitute and that will surely take some getting used to.

Spartak Moscow are by no means giants of the modern game, but they will surely prove to be tough opposition on their unfamiliar home soil.

Trying to second-guess Klopp’s team selection at the moment is a tough old business, and we thought that his starting eleven at Leicester on Tuesday would dictate the side he put out against the same opponents on Saturday.

But not so, as the likes of Joe Gomez, Jordan Henderson and Gigi Wijnaldum all kept their places.

Will the injury-prone Henderson be risked on Tuesday for what would be his third 90-minute run-out in the space of seven days? Likewise young Gomez, who Klopp must want to handle with care despite his burgeoning maturity.

Like we say, trying to predict Klopp’s movements is very difficult, but you would worry – certainly about Henderson – if that particular pair were selected for action once again.

And what about Philippe Coutinho, who has been so short of match fitness of late. He played 124 minutes in total against Leicester last week – will he be handed a super sub role on Tuesday? We suspect he will start, but than an hour or so will be his maximum output.

At last Sadio Mane is back from suspension and surely chomping at the bit to make up for lost time. The Senegalese ace has completed his three-match ban and is ready to resume his mouth-watering partnership with Roberto Firmino and Mo Salah in attack. 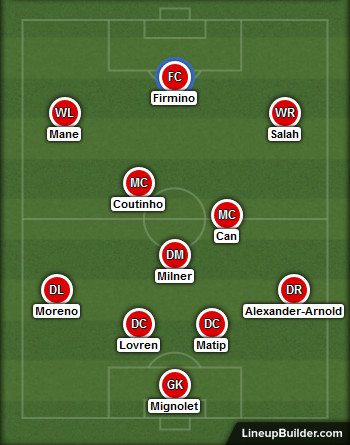 Spartak Moscow opened their Champions League account with a 1-1 draw against NK Maribor, although in truth it was the Slovenians who arguably deserved the three points.

They won the corner count 7-1, the shots on target tally 6-4 and hit the woodwork, but they couldn’t quite do enough to secure the win.

It’s fair to say that the Russians have been having a tough time of it of late, winning just one of their last six in their domestic Premier League. The main problem has been defensively – they have shipped two or more goals in 6/11 this term – and you’d imagine the holy trinity of Salah, Firmino and Salah will be licking their lips in anticipation.

But Spartak possess a few decent attacking players, and how they persuaded the uber-talented Quincy Promes to leave Ajax for Moscow is anybody’s guess. It really i$ a my$tery why Prome$ would do $uch a thing.

Some 13 of the 16 matches played in Gameweek 1 of the Champions League 2017/18 went over the 2.5 goal mark, and we suspect that Spartak Moscow vs Liverpool might just be the next addition to the club.

Our defensive frailties are no secret, and as mentioned Spartak’s real gift is for pacey attacking play rather than defending with any success. With Liverpool’s best attacking triumvirate reunited, there should be plenty of chances created.

Even taking the plastic-ish pitch into consideration, there really is no reason to suspect the Reds won’t get the job done in Moscow. So, backing the Liverpool to Win & Over 2.5 Goals at 6/4 really is the only bet that needs to be placed on Tuesday.