Despite the brilliance of their opponents on Sunday, a club of Liverpool’s stature should not be losing 1-4 to anybody. But we were well and truly ripped to shreds by Tottenham at Wembley, and once again the root cause of the defeat were basic defensive errors.

Harry Kane’s first goal was a comical affair, not that anybody was laughing, with Dejan Lovren bamboozled by Kieran Trippier’s through ball and Simon Mignolet charging off his line in kamikaze fashion. And that is the key: it’s not necessarily incompetence, it is poor decision making that is threatening to end the Reds’ season before it has really begun.

Once again Lovren was at fault for the second, missing a routine header that allowed Hugo Lloris’ throw to find Kane, and arguably it was no surprise – if a little harsh – when Jurgen Klopp hooked the Croatian after just half-an-hour.

More surprising was Klopp’s decision to switch Joe Gomez inside from right back, which was the ultimate vote of no confidence in substitute defender Ragnar Klavan. But it is also confirms Gomez’s growing maturity and the faith that the manager has in him.

So now, barely a quarter of the way through the campaign, we find ourselves at something of a crossroads. With a negative goal difference, we’re already 12 points behind leaders Manchester City, and our inability to keep clean sheets (apart from when playing an ambition-less Manchester United) means we are unlikely to taste success this term, and with the transfer window still some ten weeks away from opening the solution does not look set to reveal itself any time soon.

Three is the Magic Number?

It was at roughly this time in 2016 when Antonio Conte had had enough. His Chelsea side were in the doldrums – partly due to the hangover from Jose Mourinho’s disastrous last days, and he could not get his team to play in the manner he wanted them to. A hammering at the hands of Arsenal was the final straw.

So the managerial alchemist referred back to a system that had given him so much success as the boss of the Italian national team: a 3-4-3 formation, with wing backs and inverted attackers.

That set-up got the best out of his players, and the rest is history: immediately after the adoption of the system, Chelsea won 13 Premier League matches in a row and, as importantly, kept ten clean sheets. It’s transformative powers speak for themselves.

Imitation is the sincerest form of flattery, and both Tottenham and Arsenal have sine copied Conte, with the former even signing Davinson Sanchez in the summer specifically with the three-man backline in mind.

So why does the three-man backline work so well? Maybe it’s because of the nature of modern attacking play – most sides play with just one central striker, and how many teams deploy old-fashioned wingers these days who hug the touchline and whip crosses in? Very few, and the result has been wide players who typically cut inside onto their stronger foot, like Sadio Mane and Mo Salah, for instance.

This has meant that the main threat comes in central areas, with any wide support provided by onrushing full backs on the overlap.

So the 3-4-3 set-up, or variants of it, enable one of the centre backs to pick up their opposition forward while the two next to him can mark zones to combat these inverted wide threats. Width, in both an attacking and defensive sense, is provided the wing backs, while the two forward players that support the main striker – think Eden Hazard and Pedro at Chelsea – are free to operate in pockets of space in the final third with minimal defensive responsibility.

It’s a system that has worked magnificently for Chelsea and Tottenham, and to a lesser extent Arsenal, and the extra defensive security would be essential in transforming Liverpool into a more reliable unit and affording Simon Mignolet more protection.

The New Way for Liverpool

So how would this work in reality for the Reds? Here’s a general mock-up: 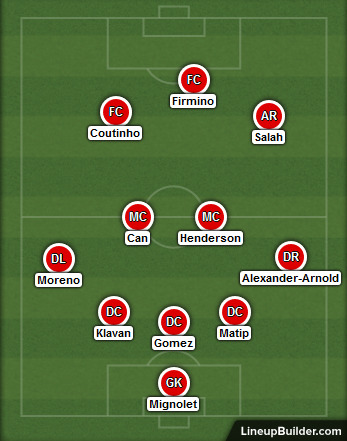 We can envisage a sort of asymmetric look to the Reds that bolsters the defensive line while keeping intact our attacking impetus.

At the back we could have the pace of Joe Gomez acting as a sweeper behind Ragnar Klavan and Joel Matip – that extra line could have helped prevent the opening two Spurs goals on Sunday, with width provided at both ends of the pitch by Alberto Moreno and Trent Alexander Arnold (or arguably Emre Can on the right).

The midfield pair generally sit in, although Gigi Wijnaldum could act as a more offensive force, and in our dream scenario Mo Salah would still start in those areas wide right that he loves to attack from.

Phil Coutinho and Roberto Firmino could then dovetail through the centre, with one just working back into the left hand channel when we are out of possession.

It’s a system that ticks many boxes – not all, obviously – and there would be question marks about how Mane and Adam Lallana fit in.

But when tight defending is required, like it was on Sunday, surely a more conservative line-up would be preferable to Klopp’s current all-out attack. After conceding nine goals against Spurs and Manchester City in just 180 minutes, a change is long overdue.

Post Tags:
Homepage » Analysis » Does Klopp Need to Switch to a Three-Man Defence to Save Liverpool’s Season?