The less said about last Sunday the better. We know, and accept, that Liverpool cannot go ninety minutes without compiling a horror-show of defensive calamities that would make all involved a few quid on You’ve Been Framed, but to do so as profoundly as they did at Wembley was rather galling.

In another post on this website we have offered up an alternative to Jurgen Klopp’s 4-3-3 system that, with the players he has at his disposal (and we mean defenders), simply does not work. The likes of Dejan Lovren cannot be trusted to sit in a back four, leaving the hapless Simon Mignolet haplessly exposed.

Our missive details a switch to a back three, which would surely help to minimise the errors – or at least, the severity of their punishment – by having more bodies in and around the beleaguered Lovren and who else may find themselves in the starting eleven.

Look, Lovren is being made a scapegoat for a series of poor team performances, and let’s face it we’ve defended terribly this season even when the Croat hasn’t been on the pitch.

So think something along the lines of Chelsea’s system, with three at the back but with the attacking trio of players still having the freedom to thrive in the final third. Which obviously suits our set-up with Firmino, Salah and Coutinho meshing so nicely at the moment – and that’s with Lallana and Mane to return!

So Jurgen, if you’re reading this (unlikely, but you never know), why not consider the switch to 3-4-3. We will surely be stronger in defence without losing any of our attacking prowess. Saturday’s home game with Huddersfield would be the perfect time to give it a try.

We don’t really expect Klopp to switch to a back three anytime soon – it’s not a system he has used in his career at all, and so it is likely to be a case of same old, same old against the Terriers.

There will be a temptation to bring in Lorus Karius or the ever error-prone Mignolet, while the decision to switch Joe Gomez inside to centre half when substituting Lovren last week suggests the youngster is ahead of Ragnar Klavan in the gaffer’s thinking.

So, Gomez is likely to move back into the centre on Saturday, with Trent-Alexander Arnold coming in at right back.

Gigi Wijnaldum has returned to full training and should come back into the side in place of James Milner, while up front it’s as you were with Firmino, Coutinho and Salah continuing in tandem. 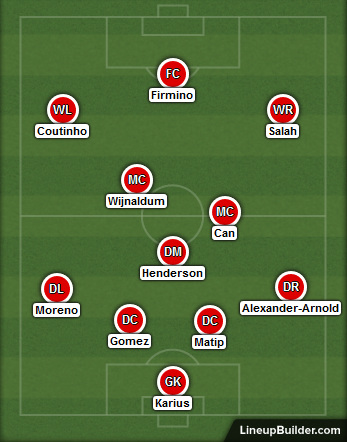 It’s been a decent enough start for Huddersfield in their maiden Premier League campaign, and roughly a quarter of the way through proceedings they will be delighted to find themselves in eleventh place.

They started tremendously by picking up seven points from a possible nine, before the honeymoon period ended with just three points earned from the available 18.

But a hard-fought 2-1 win over Manchester United has gotten the Terriers back on track, and they will fancy their chances of claiming another lofty scalp on Saturday.

Jurgen Klopp held a ‘summit’ meeting on Monday to talk through the events of Sunday, according to the Liverpool Echo, and you would assume that such a meeting would go on to result in a better performance this week.

Huddersfield will have been emboldened by their victory over United last week, but the circumstances there were a perfect storm of underdog glory: they came up against a United side low on confidence, a passionate home crowd and howling wind courtesy of Storm Brian. Away from home against a vibrantly attacking Liverpool – in settled weather – is an altogether different set of conditions.

The Terriers have also failed to find the net in each of their last three away games, and wile we are loathe to bet on Liverpool keeping a clean sheet – for obvious reasons – we would assume that the Reds will have the vast majority of possession and will create a hatful of chances as a consequence.

As stated, our attacking play remains outstanding even in spite of our defensive woes, and so we can back the Liverpool -1 handicap with some confidence at 7/10.

Open up the Anytime Goalscorer market of your favourite bookmakers’ site and you will probably notice that all of Liverpool’s front three are priced at odds-against to find the net on Saturday.

We can’t back all three at the prices as we would lose money if only one scored, and so we’re going to stick our neck out and go for Mo Salah at 11/10. He has been the bright spot in an otherwise forgettable few weeks for Liverpool.