There’s that saying that goes ‘it never rains but it pours’, and Jurgen Klopp must have allowed himself a wry smile thinking of the meaning behind that old chestnut.

It’s a bon mot that signifies that when somebody is down on their luck things seem to take an eternity to right themselves, and the German boss will be nodding in agreement to that sentiment at the moment.

After seeing his side win just one of their last four Premier League matches, Klopp will have noted the significance of the international break. It allows his players a chance to relax out of the intense spotlight of being a Liverpool footballer for a while, and for those not on international duty a fortnight to recuperate from knocks, niggles and tiredness was welcome. An opportunity to attack Manchester United on Saturday lunchtime with recharged batteries was exactly what the doctor ordered.

But then, naturally, the metaphorical rain came down. Dejan Lovren hurt his back while on duty with Croatia, and he looks set for a short but significant spell on the sidelines. But worse was yet to come….

Sadio Mane tore his hamstring while playing for Senegal, and he looks set to miss the next four weeks of the season at the absolute minimum.

The stats speak for themselves regarding the winger: the Reds have won just two of their last ten games without him in the starting eleven, and we average some 0.6 goals per game less when he’s not on the field.

So is it a case of doom and gloom around Anfield way this week? Not exactly: Liverpool are unbeaten in four matches against Manchester United (W2 D2 L0), and you only need to see how Jose Mourinho parked the bus in this fixture last season to know how much he fears us.

And don’t forget: the ‘Special One’ has injury worries of his own, with Paul Pogba and Marouane Fellaini definitely out and Phil Jones rated as no better than 50/50.

The bookmakers, who as we know very rarely get things wrong, have priced this encounter almost as a pick ‘em style match, so write off Liverpool on Saturday at your peril.

The loss of Lovren is easy enough to repair: in comes Ragnar Klavan as a like-for-like replacement. The absence of the Croatian, in truth, does not hurt us.

But clearly Mane is much more difficult to replace. His direct running and guile when cutting in from that left flank has been invaluable to the Reds this term, and his absence leaves a real hole in our free-flowing attacks.

As far as we can see, Klopp has two options to replace him. Firstly, he could decide that Philippe Coutinho is an integral part of this attacking set-up, and rather than remove him from his deeper, central role to replace Mane he could leave him where he is and bring in Daniel Sturridge as a centre forward – with Roberto Firmino sliding out to the left.

The other option is to move Coutinho back onto the left flank – a role he has occupied countless times for us in the past, and beef up the midfield by partnering Jordan Henderson and Emre Can with either Gigi Wijnaldum or James Milner (presumably the woefully out-of-sorts Alex Oxlade-Chamberlain will not be risked in a game of this magnitude).

Given that this is a home game, and his goals ratio in matches on his own patch compared to away from home speaks for itself, we would expect Wijnaldum to get the nod. 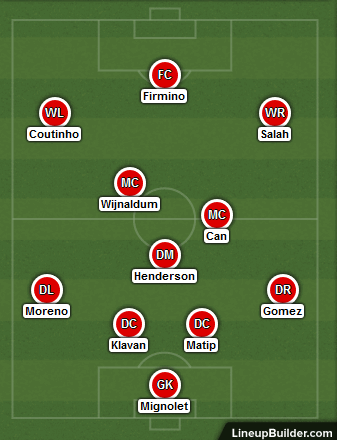 Arguably, the international break came at the right time from a Liverpool perspective.

As well as drawing a temporary line under our own errant form, it should hopefully halt the momentum that United were building up as well.

It’s horrible to say, but they have been excellent so far this term: winning six of their seven Premier League outings and enjoying plenty of early success in their Champions League campaign.

Jose Mourinho appears to have shaken off his conservative tag, and his side are playing with much more freedom as a result.

Let’s just hope the enforced break – plus the absence of Pogba and Fellaini from their midfield – derails their confidence ahead of a trip to what will be a cauldron-like atmosphere on Saturday.

This is a 50/50 contest according to the bookmakers, and we are inclined to agree with them: yes, Liverpool are missing Mane, but both Pogba and Fellaini have been instrumental for United so far this term.

Liverpool are unbeaten in four against the Red Devils and have home advantage – United haven’t scored in their last 180 minutes of football at Anfield.

Perhaps that confirms Mourinho’s fear of playing here – certainly a fear of losing to his fiercest rivals – and so there is no reason not to think the Reds have got a fine chance on Saturday. Our first selection is Liverpool with the Draw No Bet kicker at 19/20.

Are we expecting goals? Not really: the absence of Mane and Pogba diminishes those hopes, and even accounting for Liverpool’s shaky defence we have to note that each of the last five games against United have gone under the 2.5 goal line. We’ll back the ‘unders’ again at 41/40.

And the final selection comes from the Liverpool Echo, who noted that Liverpool had won the corners count in five of their last seven against United – implying that odds of 4/5 for them to repeat the feat are fair.