It is truly amazing how quickly the mood can change in football. With Liverpool seemingly lurching from disaster to disaster of late, the 3-0 win over Huddersfield was as timely a boost as Jurgen Klopp and his players could have hoped for.

Not only was that victory achieved without the injured Phil Coutinho, it was also a game in which Huddersfield rarely threatened the Reds’ goal – the Terriers not managing a single shot on target. After the defensive debacle of late, that was very much welcome.

The good vibes should theoretically continue this week. Wednesday’s opponents Maribor succumbed to a 0-7 defeat the last time the pair met a fortnight ago, and a comfortable win at Anfield would set Liverpool up nicely for a trickier double-header of fixtures to come against Spartak Moscow and Sevilla.

And then on Saturday we travel to West Ham, a match that also represents the perfect opportunity to claim another three points ahead of the international break.

With that in mind, it is possible that Klopp will field an experimental starting eleven against Maribor. Any opportunity to give the likes of Jordan Henderson and Mo Salah a rest is welcome, with it seemingly impossible that Maribor can win on Wednesday – the bookmakers have them priced at 90/1 to pull off one of the greatest shocks in European football history.

A young Liverpool side should win on Wednesday and win well; perhaps presenting Klopp with some food for thought as far as future team selection goes.

We expect wholesale changes to be made for this one. Phil Coutinho and Dejan Lovren won’t be risked, while Adam Lallana and Sadio Mane’s return from injury will be held off until after the international break.

Klopp has favoured a rotational policy as far as the Champions League is concerned, and it would be no surprise to see Loris Karius, Trent Alexander-Arnold and Andy Robertson come in to the side, with Joe Gomez partnering Ragnar Klavan in the heart of defence.

The midfield trio is likely to be James Milner, Alex Oxlade-Chamberlain and Gigi Wijnaldum, while up front Daniel Sturridge is expected to keep his place with Ben Woodburn quite possibly being handed a rare start to his left. Dominic Solanke, used off the subs bench mostly this term, may also get the nod. 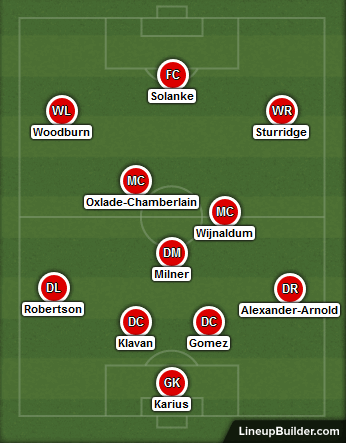 Maribor are going along nicely in the Slovenian Premier Division, embarking on a 14-game unbeaten run. But as you are probably aware, that means very little ahead of a step up in class that the Champions League brings.

A spirited Maribor side held Spartak Moscow to a 1-1 draw earlier in the campaign, but otherwise this competition has been rather unkind to them: they were thumped 0-7 by us last time out, and were comprehensively beaten 3-0 by Sevilla prior to that.

What was funny, or unusual perhaps is a better word, in that 0-3 loss at Sevilla is just how attacking Maribor were. Hey tried to get onto the front foot, and managed ten shots at goal while winning four corners.

That is intriguing, but it could also prove disastrous if they attempt to do the same at Anfield on Wednesday.

Liverpool had 15 shots on target in Maribor, which suggests the 7-0 scoreline could have been even more severe. They may need to set up the barricades on Merseyside on Wednesday.

Now here comes the tricky part: trying to find some value in a match in which Liverpool are priced as short as 1/20.

The two obvious angles of attack are to consider exactly how many do we think Liverpool will win by? And secondly, trying to second guess Klopp’s team selection may just serve up some Anytime Goalscorer gold.

The handicap line is set at -3, with odds of 19/20 available on that eventuality. Essentially, that means that we need the Reds to win by four clear goals, and so our sole question to ask, rhetorically, is can we see a changed Liverpool starting eleven having the flow and rhythm to find those four goals?

Given how the Reds dominated the reverse fixture, we would still expect a second-string Liverpool outfit to do the business.

In the Anytime Goalscorer market, there does appear to be some value. Alex Oxlade-Chamberlain and Gigi Wijnaldum at 17/10 and 5/2 respectively, look tempting, as does Trent Alexander-Arnold (7/2); a fantastic set piece taker who has scored twice in the Champions League this term.