You didn’t need to have the perceptive powers of Mystic Meg to know that Jose Mourinho would park the bus at Anfield on Saturday, and the fact that Manchester United managed just one shot on target in the 0-0 with Liverpool – and that Romelu Lukaku would have been better served staying at home with a cup of tea and watching the game on telly – speaks volumes.

In a post-match interview Mourinho declared he was happy with a point, so while Liverpool enjoyed a moral victory on Saturday they didn’t manage to capture all three points. But, the good news is that the Reds were the better side and but for a killer final touch in the penalty area could have won two or three-nil.

Jurgen Klopp and his players are off to Slovenia this week for the third Champions League group game, and this is a fixture that finally gives the Reds a chance to stamp their authority on Group E. Sevilla or Spartak Moscow (or both) will drop points in their double-header of matches, and so Liverpool have a fantastic opportunity to grasp the nettle with four points or more against Maribor in our own pair of encounters.

It should be a doddle, shouldn’t it? Well, maybe. Maribor are unbeaten in ten home matches, but a closer inspection reveals a side not exactly setting the world on fire with draws against the powerhouses of Domzale, Celje and Triglav (nope, us neither) in that run.

This is Liverpool’s chance to take hold of a top two spot in Group E – can they take it?

Despite the occasionally fierce battle with United on Saturday, Jurgen Klopp will have been delighted to see his side get through unscathed.

So he will have a full quota of players to choose from on Tuesday evening – bar the injured trio of Mane, Lallana and Clyne, of course, and we assume Klopp will continue to rotate as he has done so far in the competition.

That might just mean, wait for it, Lorus Karius comes in between the sticks – but please dear reader, don’t have nightmares. Trent Alexander-Arnold may come in for Joe Gomez with Andy Robertson deputising for Alberto Moreno; that’s assuming Klopp sticks with his rotational philosophy.

With Mane on the slab for a while longer, the gaffer might take the opportunity to rest one of this front three – all three of Salah, Coutinho and Firmino were busy last week travelling back from all corners of the globe after international duty. That may mean a rare start for Daniel Sturridge – assuming he doesn’t get injured in the next 24 hours! 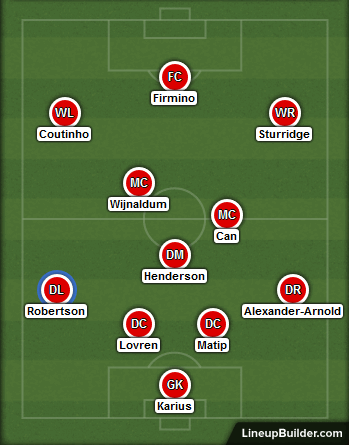 We can all agree that Maribor’s form in the Slovenian Premier League is of little consequence – the standard there is not exactly the best.

So we’ll take their form in the Champions League in isolation, and let’s ignore qualifying matches as they generally aren’t a good guide.

We are left with two fixtures to consider, and both suggest the same thing: this Maribor side is there to be attacked. When they played Spartak Moscow it was a truly open affair, with the Russians firing in 19 shots at goal – if they were rather less wasteful, they would have won handsomely. We know that Liverpool haven’t been clinical in front of goal this term either, but the law of averages suggests if given enough opportunities they will put the ball in the net.

And when Maribor met a higher standard of opposition in Sevilla, they were blown away 3-0. The Spaniards also recorded ten shots on target and hit the woodwork, and this suggests to us that they have no idea of how to shut games down and make life awkward for their opponents. That could be disastrous against the Reds.

The bookmakers have priced Liverpool at 2/11 to win this game and Maribor an astonishing 22/1, so already we know we’ve got our work cut out to find any worthwhile value.

If Klopp does decide to rotate his starting eleven than it could result in another disjointed Champions League performance from his men, and with Maribor priced at such lofty odds we know that we can place a handicap wager in their favour at mouth-watering value.

They are available at 11/10 with a +2.00 Asian handicap, and that’s worth a look given that Mane is definitely out and one of Coutinho, Firmino and Salah is likely to be given the night off. For what it’s worth, Maribor haven’t conceded two or more goals in any of their last 19 matches in the Champions League!

Otherwise, this is not a particularly good betting fixture for Reds fans and punters, so our only other longshot flutter is draw/Liverpool in the half time/full time market at 3/1.