As expected, Liverpool recorded a resounding 0-3 win at Stoke on Wednesday evening, although in truth the context of the game suggests an encounter that was rather closer than the scoreline suggests.

Jurgen Klopp rang the changes after a hectic schedule in recent weeks, with Mo Salah, Phil Coutinho and Jordan Henderson all given a watching brief from the substitutes’ bench.

It was Sadio Mane, restored to the starting eleven after putting his feet up at the weekend, who opened the scoring with a clever finish after 17 minutes, and you might have thought that would have opened up the floodgates for a hungry Reds attack.

But Stoke stuck manfully to their task, and arguably should have profited greater when Simon Mignolet brought down Mame Biram Diouf. The keeper was booked, rather than dismissed, and the Potteries outfit couldn’t take advantage from the resulting free kick.

Cometh the hour, cometh the man. Salah came on in the 67th minute to replace Dominic Solanke, and the Egyptian’s impact was as stellar as his contribution has been all season.

He volleyed home the second after good work from Mane, and when put clean through on goal in the 83rd minute he showed fantastic composure to slot home and secure another comfortable – at least in terms of the scoreboard – win.

That maintains our position in fifth in the Premier League, and leaves us well poised just six points behind Manchester United in second.

We’re on the road again this week to Brighton, a side unbeaten in six on home soil, albeit the last four have been draws against teams in the bottom half of the table. Is another resounding Reds win on the cards?

The manager’s rotation policy has worked a charm of late, and while he comes in for criticism on social media for resting key men let’s be honest: he knows better than ‘Football Manager pros’ like us.

Next week we have the Champions League game against Spartak Moscow which will define our season. Yes, we only have to avoid defeat against the Russians to qualify for the knockout stage of the competition, but Klopp will leave nothing to chance and name his strongest starting eleven.

And that, presumably, will be reflected in further changes to the side against Brighton.

He will presumably continue with Joe Gomez at right back, who was outstanding at Stoke and has shown unbelievable progression this season following injury.

Ragnar Klavan has played plenty of minutes of late, and with Joel Matip needing game-time following injury he may deputise. On the left, Alberto Moreno has put in plenty of hard graft and could be given the afternoon off in favour of Andy Robertson.

Klopp has options in midfield and will presumably select Henderson and Coutinho, who barely played a minute on Wednesday. The choice is then between Gigi Wijnaldum, Emre Can and James Milner for the third berth.

Roberto Firmino and Sadio Mane near enough played the full 90 minutes at Stoke and may be given another rest, with Daniel Sturridge and Alex Oxlade-Chamberlain ready to deputise. And after his cameo perhaps Salah will be unleashed on the Seagulls too. 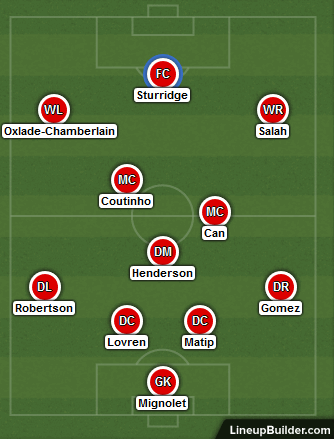 Brighton have been excellent this term, and if you offered anyone associated with the club tenth place after fourteen matches at the start of the season they would have snatched your hand off.

The foundation of the Seagulls’ excellence has been their home form. They’ve lost just one of seven in front of their own supporters, and that was way back on the opening day against Manchester City.

So it’s very much a case of so far, so good for Chris Hughton’s men, but mitigation should be made: they have played three of top six teams this season and lost the lot to Man City (0-2), Arsenal (0-2) and Manchester United (0-1). That should give Liverpool plenty of confidence.

As we can see, Brighton tend to struggle to score goals against the big boys, and generally that’s a theme across all of their games. They average less than a goal per game (13 in 14), have failed to net in their last two and have only scored two or more goals in 3/14 this season.

That suggests that the Reds will only need to score once to win this game, and that’s something that obviously they are very capable of doing.

So by that sentiment the odds of 1/2 available on a Liverpool win are instructive and fair, and while the vast majority of punters rarely delve so low you would have to say that that is decent value.

For punters who prefer their prices on the mouth-watering side of even money will be delighted by the Liverpool to Win to Nil price of 6/4. This has landed in each of Brighton’s three matches against top six sides remember, and five of Liverpool’s seven Premier League wins have satisfied this mark.