It’s hard to really digest the events of Tuesday evening in Sevilla, and quiet reflection is needed just to decide if the experience was a positive one or not.

Okay, so we romped into a 3-0 lead after just half-an-hour courtesy of goals from Roberto Firmino (x2) and Sadio Mane, and in a match that was essentially a winner takes all contest at the summit of Group E of the Champions League that was a phenomenal effort.

But whether it was complacency or what that set in at half-time we’ll never know, but two errors from Alberto Moreno – one in giving away the free kick from which Yissam Ben Yedder nodded home, the second in fouling the same man, who dusted himself off to score from the spot – gave Sevilla a lifeline at 2-3.

And when Guido Pizarro tucked home in extra time the most unlikely of comebacks was complete.

So was that a psychological flaw in the Reds’ make-up? Not according to Jurgen Klopp. “I don’t doubt the mentality of the boys, not a bit. We showed already a fantastic mentality. We showed it in a lot of other games. It’s not like this,” were his words during the post-match press conference.

We can take the positives – that’s fourteen goals scored in our last five games, and finally messrs Coutinho, Mane, Firmino and Salah are all fit at the same time, with Lallana waiting in the wings, but another derisive defensive display cannot be ignored.

The Reds will need to improve on Saturday evening against Chelsea, that’s for sure. The Blues have won their last five games in all competition, and while they are yet to hit the highs of last season they still represent a rather dangerous opponent.

The only major injury concern for Klopp to contend with at the moment is Joel Matip, who missed the trips to West Brom and Sevilla.

The lanky centre back has been struggling with a thigh injury of late, although Klopp has said there is a ‘big chance’ he will be ready for Saturday.

An embarrassment of riches for the manager then, who must decide whether to continue with his Harlem Globetrotter style front four, or make alterations to cater for the quality of opposition.

Our initial instinct is to go with an attacking outlook. Chelsea aren’t a particularly offensive side, and they indeed may opt to play a 3-5-1-1 formation with Eden Hazard operating just off of Alvaro Morata. The idea will be contain Liverpool, and so they will crowd the middle of the park as much as possible – similar to the job they did on Tottenham at Wembley earlier in the campaign. 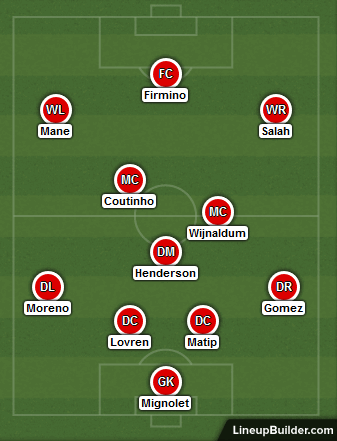 The Blues have won each of their last five matches, although they have only recently started to genuinely impress.

The wins over Watford and Bournemouth were lucky, to some extent, but the tide seemed to turn with the 1-0 win over Manchester United. The Londoners were the better side that day, earned the three points courtesy of a Alvaro Morata header and – perhaps most importantly – got the fans back on-side.

Since then it’s been excellent progress for the Blues, with a pair of 4-0 victories over West Brom and FK Qarabag respectively.

This match is a contrast of styles, and those are always difficult to predict. Liverpool will line up and play in their usual carefree style, while Chelsea – falling short of parking the bus – will still defend deep and in numbers, attempting to stifle our attacking raids in much the same way that Manchester United did at Anfield earlier in the season.

That said, how’s about this for a statistic: 12 of the last 15 Liverpool vs Chelsea matches have witnessed both teams scoring, with seven of those going over the 2.5 mark.

So if you are putting together a Saturday accumulator then add BTTS here to your coupon at 8/13.

And it is noticeable that there is very little to choose between these teams, with four of the last seven meetings ending 1-1. Fancy that run to be extended to five on Saturday? You can back that scoreline at 13/2.

Do Chelsea have any weaknesses? Not really no; they are reigning Premier League champions after all. But right at the heart of their defence they boast the considerable talents of David Luiz – a fine footballer, but not necessarily the most reliable defender.

If he is recalled to the Chelsea starting eleven for this one, we fancy that Roberto Firmino will get a chance or two to get on the scoresheet. Back the Brazilian to find the net at any time at 15/8.