The international break is a good time to take stock, look back at what has happened so far and see where we’re heading as the run-up to Christmas and the New Year intensifies.

As Santa Claus and his elves get ready to roll up their sleeves and partake in some gainful employment, Liverpool could be through to the Champions League last 16 and in the Premier League top four or – unlikely but still possible – out of the Champions League and no better than sixth in the EPL.

Clearly, fixtures against Sevilla (a) on November 21, Chelsea (h) on November 25 and Arsenal (a) on December 22 are going to determine how our season pans out in the first half of 2018.

Many of us were hoping that Jurgen Klopp might have been a bit busier in the summer, with those key defensive requirements not forthcoming. The manager did make four signings though, and we wanted to explore how well those guys have taken to life at Anfield, reflect upon the job done by Klopp so far in 2017/18 and take a look to see if/why Liverpool have underachieved this term.

Are Liverpool FC where we expect them to be at the quarter mark of the season? That probably depends on how demanding you are, but given our general lack of transfer activity from a defensive perspective in the summer, fifth place is probably all we could have hoped for.

Even in this modern age of trolling and relentless judgery, nobody really thought that a central defensive partnership of Joel Matip and/or Dejan Lovren and Ragnar Klavan was going to propel us to the title, did they?

Hindsight is a wonderful thing, but neither of that latter pair have ever even hinted that they might be defenders who can operate at the elite level that pulling on the red shirt of Liverpool demands.

From an attacking sense it would be churlish to complain about anything: we average two goals per game this term, and if you can maintain that over the long term then plenty of victories will naturally follow.

Of course, we’d like to have Champions League progression wrapped up after four rounds of matches, but at least our fate is in our own hands. And just three points off the top four domestically, it’s a case of good, but could do better, for Liverpool so far this term.

The King of Egypt, as he has become known, has been absolutely sensational so far, and it’s hard to think of a better signing anywhere else in 2017/18 to date.

The winger has contributed 12 goals and four assists in just 17 appearances for the Reds this term, and at times he has to carry the attack almost single-handedly given the injuries and absence of Adam Lallana, Philippe Coutinho and Sadio Mane.

With six goals in as many games, Salah’s form is red hot, and when we can get the likes of Lallana, Mane and Coutinho back playing in tandem surely the Egyptian’s output can only improve further.

His debut at Leicester in the Carabao Cup was a disaster – he seemed more focused on getting his socks to the right length than winning over the Liverpool fans, but slowly and surely the Ox is starting to prove his worth.

Okay, so £40 million is over the odds for what is essentially a fringe player when the squad is back to full fitness, but you ca always expect to pay that sort of premium on young English talent.

And it’s not the player’s fault that he has been tarnished with a such a price tag, and so we can only judge him on what we see.

And that suggests a real improvement if his performances against Maribor and West Ham are concerned. He was a creative presence in the midst of the Maribor defensive wall, and his pace and guile was key in a sublime counter-attacking display against the Hammers.

His average of 0.9 key passes per 90 minutes is better than Gigi Wijnaldum’s return and only 0.1 worse off than Mane, so the message is let’s keep giving the Ox an opportunity to shine.

His opportunities in a red shirt have been kept to a minimum, but we’ve been impressed by what we’ve seen from the Scot.

The two performances that stand out were both starts, against Crystal Palace in the league and Leicester in the Carabao Cup, where he provided a real cutting edge down the left flank.

We’d love to see more, but Alberto Moreno appears to be Klopp’s favourite child at left back.

In his small number of minutes played so far, two things have become apparent about Solanke: he’s a talented young man, but not yet ready for first team action.

What can you say about the gaffer? His best qualities are also his biggest downfall: his loyalty to certain players knows no bounds, and his absolute determination to play attacking football is, occasionally, outed as lunacy.

But the German’s keenness to blood youngsters has not gone unnoticed, and the likes of Joe Gomez and Trent Alexander-Arnold do look ready to take the next step in their careers. Let’s hope Ben Woodburn and others follow suit when given the opportunity.

It would be nice if Klopp considered a three-man defence – particularly in big matches, as that is clearly our Achilles heel. It’s no good averaging 2.00 goals per game if you are shipping three at the other end!

But for all his critics, the following graphic sums up the excitement of Klopp’s reign and what we can hope to expect to achieve with a full strength squad.

This is the Expected Goals table, provided by the excellent We Love Betting, and shows that on the strength of chances created alone, Liverpool should be third in the table; and not a million miles away from the leaders.

So the conclusion to the first quarter of the campaign is simple: keep the faith! 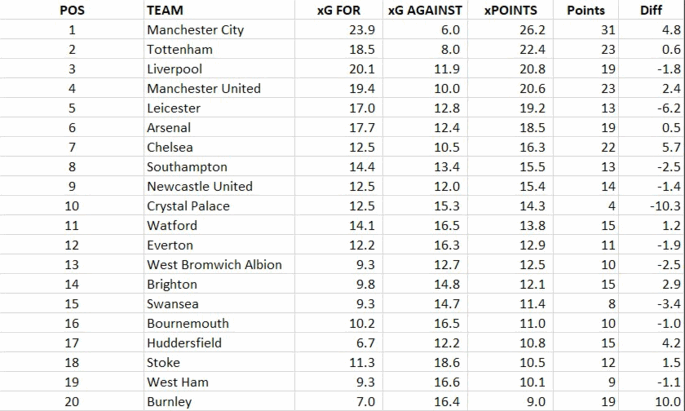 Post Tags:
Homepage » Analysis » Liverpool’s Half Term Report: Bags of Potential, But Lads Must Do Better