In our preview of Saturday’s match, we suggested that Southampton’s negative approach would be tailormade for Liverpool, and so it proved with the Reds delivering a blistering display to run out 3-0 winners.

Goals from that man Mo Salah – there are no superlatives left to describe the Egyptian – and Phil Coutinho secured the three points but most encouraging was the fact that the two goalscorers, plus Sadio Mane and Roberto Firmino, were able to work beautifully in tandem together. That bodes very nicely for the rest of the campaign; in the event that all can stay fit, anyway.

We can expect a rather more difficult assignment on Tuesday evening in Spain however at Sevilla, who have endured a mixed start to the 2017/18 campaign but whose home form in La Liga – W5 D1 L0 – speaks volumes about their credentials.

Group E of the Champions League is poised rather nicely, and with the trump card of a home date against Spartak Moscow to come a minute amount of the pressure on the players has been lifted ahead of a tough trip. Hopefully, that means Jurgen Klopp can employ that majestic front four again and see where it takes us.

Of course, there’s a chance that the Russians can gain ground on us when they host Maribor, but if we can pick up a draw at Sevilla then they would need to beat the Reds at Anfield in the last round of fixtures, and there’s no reason why Klopp and co can’t feel confident about that turn of events.

As we know, Klopp has enjoyed rotating his squad for Champions League nights, and once again it will be interesting to see if he opts for that strategy once again this week.

The footballing purists amongst us would love it if he fielded the Coutinho-Mane-Salah-Firmino axis of evil together again, but that would not exactly be the most pragmatic approach ahead of what will presumably be a tough game.

That will test the manager’s faith in Loris Karius, his normal choice in goal for matches in this competition, while Joe Gomez will come into the side after impressing while on England duty. If Joel Matip has recovered from his groin injury that kept him sidelined for the Southampton game then he starts as well, surely.

If a more conservative approach is preferred in midfield than Emre Can will surely come in to the midfield alongside Jordan Henderson and Gigi Wijnaldum, with Phil Coutinho possibly moving into the inside left channel if Sadio Mane suffered any ill effects from playing 74 minutes despite only just overcoming a thigh injury. 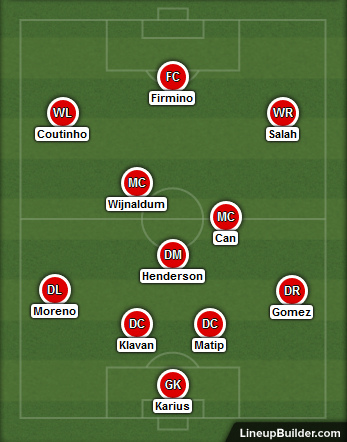 Sevilla are a strange old side: as likely to produce a fantastic display at home as they are of absolute mediocrity on their travels.

They’ve won each of their last five home games in La Liga and both of their Champions League outings in front of their own supporters, but here’s the thing: they’ve not exactly been battling the crème da le crème of footballing excellence. Those seven home games have been against Spartak and Maribor, plus Eibar, Las Palmas, Malaga, Leganes and Celta Vigo.

Like we say, the hosts have yet to meet anyone with Liverpool’s attacking vibrancy so far this season on home soil.

And when they have played decent sides away from home, just look at the results: they’ve lost at Barcelona, Atletico Madrid and Athletic Bilbao, and they were trounced 0-4 at Valencia. The context is different – Sevilla are notoriously poor away from home – but the fact they have been routinely outplayed by quality opposition this term speaks volumes.

The bookmakers have priced Sevilla at 17/10 to win this match and Liverpool at 13/8, with the insinuation being that they simply don’t have a clue how it is going to pan out.

As is the case in these seemingly close games, a case can be made for either side – so perhaps following in by backing the draw at 13/5 is the smart thing to do from a betting perspective. Alternatively, the Liverpool +0.00 Asian Handicap offers similar security with a wider scope at 19/20.

We’re certainly happy to recommend the goals angle, too. Sevilla have scored in each of their eight domestic/Champions League home matches, and shipped against the likes of Spartak, Espanyol, Leganes and Celta Vigo. Liverpool’s attacking strengths, meanwhile, need no introduction….