As Jurgen Klopp pointed out in his post-match press conference, it was always going to be difficult for Liverpool to overcome a Chelsea side packed with eight defence-minded players.

He was infuriated too when unable to bring on Adam Lallana just moments prior to Chelsea’s equaliser – a move which Klopp explained may have snuffed out the danger as he wanted to switch to five in defence. “I was angry because we wanted to change the system, but the referee didn’t give us the opportunity,” he said.

“I don’t know what he thought in this moment, he told me something about taking too long, I don’t understand it. How can we take too long? We didn’t want to time waste, we wanted to change the system and that’s why I was angry.”

And but for a huge slice of luck in Chelsea’s favour – Willian whipping in a late cross that somehow evaded everyone and ended up in the back of the net, Liverpool would be celebrating an excellent three points and an extension to Klopp’s outstanding record against the other sides in the Premier League’s top six.

So, all in all, Saturday’s encounter was a positive experience for the boys, and they can take plenty of confidence from that into a rare midweek fixture in the league.

We travel to Stoke on Wednesday evening, and with the Bet365 Stadium largely being a happy hunting ground for the Reds – four wins in five visits – we can be confident of claiming the three points which could, mathematically at least, propel us into the top four.

The beauty of resting Mane, Firmino and Wijnaldum for the Chelsea game, as odd a move as that was, is that the trio can come straight back into the starting eleven for the trip to the Potteries.

Dejan Lovren is unlikely to play a part as he is still struggling with a back injury, so Ragnar Klavan is expected to deputise, and there may be a run-out at full back for Trent Alexander-Arnold ahead of Joe Gomez, who has had a testing schedule of late.

Emre Can is battling a calf strain and is again a doubt, while Mo Salah – who has been unbelievable this season – is surely due a rest after a punishing slate of fixtures for club and country.

We would anticipate that Wijnaldum will come in for James Milner to provide some dynamism in midfield alongside Jordan Henderson and Phil Coutinho, while in attack Mane and Firmino could well be joined on the right flank by Alex Oxlade-Chamberlain, who Klopp was full of praise for after his contribution against Chelsea. 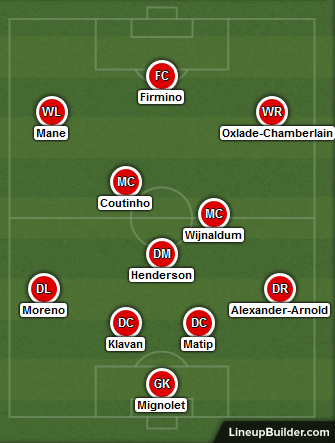 Stoke are that archetypal Premier League outfit for whom mid-table security is the watchword. They can be excellent, they can be awful, but more often than not they are okay under Mark Hughes’ stewardship.

Their form offers hints of positivity – they’ve lost just once in four outings, with three of those taking place away from home, but also suggests that an obvious weakness occurs in their make-up: Stoke have conceded two or more goals in a whopping eight of their last ten outings.

Their record against elite-level opposition is confusing, too. They have beaten Arsenal and drawn with Manchester United this term, but also lost 2-7 at Manchester City and 0-4 against Chelsea.

As such, trying to sum up Stoke’s current form is rather difficult!

The key narrative realistically has to be Stoke’s poor defensive record when considering where to place your bets for this one. Yes, they conceded seven in a single game against a rampant Manchester City side, but over the course of 13 gameweeks only Everton have shipped more goals than Hughes’ team.

Liverpool can call upon a rested Sadio Mane and Roberto Firmino, Mo Salah if they want to, with Adam Lallana jostling for game-time with Phil Coutinho. In short, Jurgen Klopp has attacking options coming out of his ears.

Liverpool defended very well against Chelsea – snuffing out their rare counter attacking forays, and while the threat posed by Stoke will be very different, especially if/when they turn to their Plan B of launching diagonal balls to Peter Crouch, in essence they don’t have that many weapons with which to hurt us.

That said, Both Teams to Score looks a shoe-in; that has landed in six of Stoke’s last seven outings as well as five of Liverpool’s last six away from home. You won’t get much of a price though – odds of 7/10 are market leading – so instead opt for the Liverpool to Win & Both Teams to Score mark of 2/1.