If Christmas is a time for giving, then the Premier League fixture-list compiler has come up with the goods in arranging this Friday night shootout on the capital. Okay, so the trip to London on a Friday evening is a bit of an annoyance for the travelling red army, but at least it gives us a chance to get some late-in-the-day shopping done. And a Christmas do in the capital will do very nicely!

Admittedly, we’re not even halfway through the campaign as yet, but the race for fourth place is hotting up with Liverpool a point above Arsenal heading into this clash. Realistically we should be aiming higher than that – given our attacking intent, there is no reason why we can’t finish as high as second, but for now taking three points off the Gunners is a mighty step forward.

Jurgen Klopp has called for greater consistency from his players this week, and you can’t really blame him having witnessed his side completely destroy Bournemouth after failing to beat West Brom and Everton at home.

It’s a curious situation that the Reds find themselves; we’re currently playing better football away from home than at Anfield, as evidenced by the 24 goals scored on the road compared to 14 on home soil. That’s no coincidence: teams come to Merseyside and park the bus, making it difficult for us to grasp the initiative, but away from home when the onus is on our opponents to make things happen we can counter-attack with relish.

And that’s exactly what we did in the 4-0 win over the Cherries on Sunday. Goals from Firmino, Salah, Lovren and Coutinho sealed the deal, while the latter and Oxlade-Chamberlain also hit the woodwork, and that only partly tells the tale of the tape. This was a vintage Liverpool away performance, with Bournemouth seeing plenty of the ball but doing very little with it. The Reds, on the other hand, were deadly.

So there is absolutely no reason to fear a trip to the Emirates Stadium, and indeed this Arsenal outfit looks ripe for the picking. They were beaten by Manchester United (somewhat fortuitously), were held to draws by Southampton and West Ham, and just about scraped past a woefully out-of-form Newcastle side by a single goal.

We stand an excellent chance of opening up a four-point gap over the Gunners on Friday night….that will really get the party started!

Jurgen Klopp is no stranger to squad rotation, and of course to get through this manic Christmas period intact he will once again have to make the most of his available personnel.

But for this all-important clash he will surely name his strongest side and the one most likely to win him the three points….but what exactly does that look like?

One player we don’t expect to feature is Joel Matip, although happily he is now back in full training following his thigh injury which has seen him sidelined for the last five games. “Joel Matip is a positive. I’m not sure if he’s ready for Arsenal but for the games coming up I’m pretty sure,” were Klopp’s words on the matter.

So to some extent the team picks itself. Mignolet will continue in goal, with Gomez, Lovren and Klavan in defence. On the left, Klopp may opt for the experience of James Milner over the youth of Andrew Robertson; we know that Milner doesn’t want to play at left back, but his nous in combatting Ozil and co could be essential.

In midfield we will need legs and dynamism to match Arsenal’s trio, and so it wouldn’t be a surprise if Henderson and Can were partnered with Oxlade-Chamberlain in the middle.

In attack, four into three doesn’t go so one of Salah, Coutinho, Mane and Firmino has to miss out. Mane was on the bench against Bournemouth and didn’t get on; is that a sign he is being saved for this match, or perhaps a signal he has been put on the ‘naughty step’ following the draws with Everton and West Brom? It’s hard to say, but he may have to sit this one out again after the front three all notched in the last game. 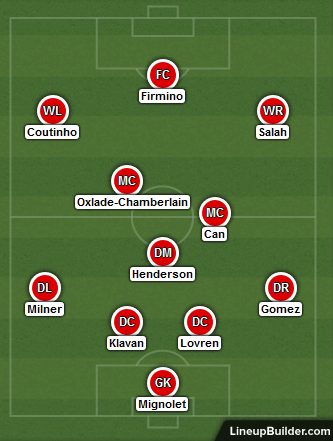 We’ve already mentioned a bit about Arsenal’s form, and in truth it hasn’t been great.

Okay, so they’ve only lost one of their last seven league outings, but as ever the contet is key.

The 1-3 defeat to Manchester United was unlucky in that David de Gea played an absolute blinder, but don’t forget that two of the Red Devils’ goals came from defensive mistakes from the Gunners.

Then came the draws with Southampton and West Ham; none of the shot data suggesting they were good value for anything more than a point.

And yes they dominated the game against Newcastle last time out, but to only record a one-goal win over a side that had lost seven of their last eight is perhaps testament to the fact that all is not well in the Arsenal camp.

It’s telling that one the three occasions where opponents have really taken the game to Arsenal, they have been found wanting defensively: 0-4, 1-3 and 1-2 defeats to our good selves, Manchester City and Watford respectively.

We are, of course, respectful of the fact that they have a goal or two in them, but we really don’t see any reason to be afraid of a Gunners backlash on Friday.

So here’s a fun bet that will help to build your bank balance back up after the Christmas splurge, and while it’s only available at a small number of bookmakers Liverpool/Draw Double Chance & Both Teams to Score is huge value at 23/20.

If your bookie doesn’t offer that option, then follow in the Liverpool +0.00 Asian handicap at 11/10 – we really do feel positive about our chances in the capital.

Post Tags:
Homepage » Match Previews » Arsenal vs Liverpool Betting Tips (22/12/17) – Can the Reds Get the Better of a Capital Goal-Fest?