There can’t be many occasions where an away team has deserved a point as little as Everton’s ‘earned’ in the 1-1 at Anfield on Sunday. Liverpool enjoyed 79% possession of the ball, and while we have noted in the past that this is the most regressive stat in the beautiful game, the context here is that the Reds had the ball for some 72 minutes of this match.

That is an extraordinary statistic, and yet truthfully it means very little. We put the ball in Everton’s net once and they did likewise to us, and while we can argue about the specifics of their penalty – what on earth was Dejan Lovren thinking? – the history books confirm that points dropped like these ultimately cost teams dearly.

And Jurgen Klopp must shoulder some of the blame. Yes, it is difficult to keep a squad fit and fresh when you are operating in both the Premier League and Champions League, but why did he choose to rest the likes of Roberto Firmino, Phil Coutinho and Gigi Wijnaldum for a game of this magnitude? Maybe he doesn’t understand how fierce the rivalry is with the Toffees?

The point is that Liverpool dominated possession, created plenty of half-chances but Dominic Solanke, who is still very much learning on the job, was unable to make the most of them. Had the in-form Firmino started, who knows what the end result would have been.

The best teams in the world are those who are capable of sweeping negativity under the rug, and at least we have an immediate opportunity to do that on Wednesday evening against a West Brom side that hasn’t won since August. Nothing but three points here can be tolerated.

Trying to second guess Klopp’s team selections has had a habit of leaving us looking rather foolish of late, but at least we know there are two definite absentees: Joel Matip is targeting a Boxing Day return from his thigh injury, while the diagnosis on Alberto Moreno’s ankle injury is better than first feared….but still not enough for him to be in the squad here.

So that informs us to some extent of how we will line-up against the Baggies, and with an extra day of recovery – we don’t play Bournemouth until Sunday – surely the manager can be a little more adventurous with his team selection.

Remember, West Brom won’t attack us – they have always been a defence-minded side, and the appointment of Alan Pardew as manager won’t change that. So, let’s hope that Klopp decides to give them both barrels…. we can’t afford to drop any more points this week. 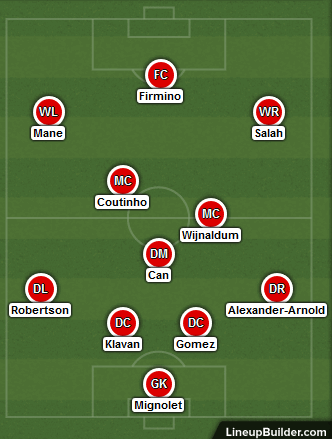 The fact they haven’t won since August speaks volumes about West Brom: a side with limited ambition but one that can scrap results on their day.

Take the point they earned at Wembley against Tottenham in November; a really positive result for the Midlanders.

But their away form overall tells a story (W1 D2 L5), and it seems as if they are so defensive, and so unwilling to take the game to their opposition, that they are almost crippled by fear on the road.

The fact they are yet to score in 180 minutes of football under Alan Pardew’s stewardship also tells it’s own story.

West Brom rarely get heavily beaten in a game, and indeed of their seven defeats this term four have been by a solitary goal.

But they were soundly defeated by Arsenal (0-2), Chelsea (0-4) and even Brighton (1-3), which shows they have been well outclassed at times this term.

If Jurgen Klopp picks a strong Liverpool side from an attacking perspective – and it’s a big if certainly given his penchant for rotating his staff – then there is no reason why the Reds won’t win this game and win it well.

So our main play for this game, and forgive us the stingy price, is the Liverpool -1.50 Asian handicap at 8/13. This basically means that if the Reds win by two or more goals then our bet lands.

The Baggies have scored just four goals in eight away games this season, and that sumps up their lack of enterprise on the road. People may berate our defence but here’s the thing: but for Dejan Lovren’s moment of madness against Everton on Sunday we would surely have kept a clean sheet: that would have been our sixth in just eight appearances at Anfield.