Jurgen Klopp is a consummate professional, and so his post-match interviews are conducted with a stony-faced stoicism throughout, but even he would have been delighted with the 5-0 win over Porto in the first leg of this Champions League last 16 tie.

When asked if he thought the tie was over as a contest in the immediate aftermath of that triumph, Klopp remained conservative in his response. “No, of course not, why should I? We came here to create the basis for the second leg at Anfield – and that’s what we did, not more, not less. I am too long in the business to think anything is sorted before the final whistle,” he said.

So that gives an indication of the seriousness that Klopp is treating a tie that others might consider a dead rubber, although whether that will be reflected in his team selection on Tuesday remains to be seen. Don’t forget, we have the small matter of a trip to Old Trafford on Saturday to contend with.

Perhaps the manager’s decisions in the 2-0 win over Newcastle on Saturday evening were telling. With the three points assured thanks to goals from Mo Salah and Sadio Mane, Klopp decided to substitute the Senegalese ace and Alex Oxlade-Chamberlain, which would suggest that he plans to utilise them on Tuesday.

There will be no quarter given against Porto, who themselves enjoyed a morale-boosting victory on the domestic front against Sporting Lisbon on Friday. But our aim simply has to be to win this second leg – with a weakened starting eleven or otherwise – to keep our fine form of late going.

The insinuation of Klopp’s post-match comments after the first leg were that he would be fielding his strongest available eleven here, but we imagine his stance has rather softened since then.

Make no mistake, he will want to take his first-choice eleven to Old Trafford, and won’t take any chances with his key players in the lead-up to Saturday’s defining clash.

From back to front, Simon Mignolet may get a recall in goal – Klopp has rotated his keepers in the cup competitions.

Players who need game time will presumably get the call on Tuesday, and that would suggest a back four of Joe Gomez, Joel Matip, Ragnar Klavan and Alberto Moreno.

The experience of James Milner will be useful in the midfield trio – it’s always good to have a steady hand in these sorts of matches, and he will perhaps be accompanied by Gigi Wijnaldum and Adam Lallana in the middle of the park.

The biggest decisions will perhaps come in attack: which of the fab three will start here, and which will be held over until Saturday? We suspect that Salah and Firmino will be given the night off, with Oxlade-Chamberlain starting on the right, Mane left and Dominic Solanke – fresh from a hat-trick for the under-23s – through the middle. 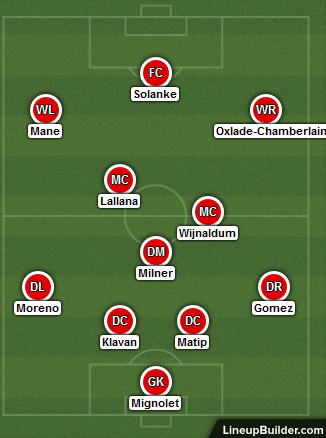 Their performance in the 0-5 defeat was not indicative of Porto at all; they are typically much better than what they showed on Valentine’s night in the first leg.

They are romping away with the Primeira Liga title having beaten Sporting on Friday to extend their unbeaten run to 25 matches in the league.

And the Portuguese outfit did tremendously well to qualify from the so-called ‘Group of Death’ in the Champions League, which also featured Besiktas, RB Leipzig and Monaco.

They scored six goals in three away dates, including a 3-0 win at Monaco and a 1-1 draw at Besiktas. But the model the Reds should be following is Leipzig’s, who played a high press and attacked at pace, beating the visitors 3-2.

This is one of those strange games where, realistically, nothing is riding on it and both teams have a free hit to some extent. Porto, in particular, can enjoy their night out at Anfield with little or no fear.

As for the Reds, it will be a chance for some of the fringe players to show Klopp that they have what it takes to step up when called upon. There are battles at the moment for a first-team place – Mignolet vs Karius, Gomez vs Alexander-Arnold, Lovren vs Matip, Lallana vs erm, everyone in midfield. This is their chance to get noticed by the manager.

This is a particularly tough match to bet on without knowing the starting line-ups, and really the outcome will be dictated by how strong the Liverpool eleven is. If Klopp goes in with a strong side, we would expect the Reds to win.

But this Porto side, with nothing to lose, could be dangerous if we make changes, so perhaps backing the Portuguese outfit with a +1.00 Asian handicap at 53/50 is the smart move here.