It is not a game that will live long in the memory of anyone who witnessed it, but Liverpool’s 0-0 draw with Porto on Tuesday was significant in that nothing went wrong. Nobody played abysmally, and nobody got injured. Ahead of Saturday’s trip to Old Trafford, we couldn’t wish for more.

Of course, Tuesday’s encounter with the Portuguese outfit was a dead rubber, to all intents and purposes, with the Reds holding a 5-0 lead from the first leg of this Champions League last 16 affair, and so there was very little that could go wrong.

Sadio Mane looked lively once again and hit the woodwork, while Dejan Lovren and the forgotten man, Danny Ings, also going close as they dominated a game in which Porto mustered just one shot on target.

The likes of Joe Gomez, Alberto Moreno, Adam Lallana and Ings all got some much-needed game-time, while Mane, Mo Salah and Bobby Firmino had a chance to rest their legs, mostly; playing 74, 16 and 62 minutes respectively.

“It wasn’t the most exciting game but we controlled it, had a few chances, got a clean sheet and gave some boys some minutes. I am pretty sure it is rare to have a game like this in the knockout stages!” Jurgen Klopp said at the final whistle.

So all is good ahead of the trip to Old Trafford to take on a Manchester United side who will be buzzing after overcoming a 0-2 deficit against Crystal Palace on Monday night to win the game in injury time. Bigger picture time, boys: you were two-nil down to a Crystal Palace outfit with ten first-team regulars out injured!

The news on the injury front is good for Klopp, with both Andrew Robertson and Jordan Henderson expected to be fit after picking up knocks of late.

Gigi Wijnaldum has been battling illness lately and was considered not fit to start against Porto, but he should be available for selection on Saturday.

So with Nathaniel Clyne as the only confirmed absentee, the only selection headaches for Klopp are deciding, from a tactical perspective, who are his best fits to try and break down Mourinho’s parked bus.

The front three picks itself, of course, and so to does the back four with Trent Alexander-Arnold and Andy Robertson confirmed as first choice full backs, and a central defensive pairing of Virgil van Dijk and Dejan Lovren best placed to placate the physicality of Romelu Lukaku.

The midfield three can be conceived in different ways, but the Reds will likely come up against United’s trio of Paul Pogba, Nemanja Matic and Scott McTominay. So, our line-up will need to be strong, dynamic and physical, which lends itself to a Henderson-Can-Oxlade-Chamberlain triumvirate. 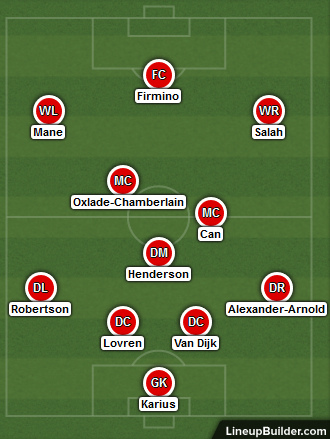 United got out of jail big time on Monday night, and that is symptomatic of their slightly below-par away form.

That said, they have been decent at home this term (W11 D2 L1), and their last outing at Old Trafford saw them beat Chelsea 2-1 in a solid performance.

What is intriguing is United’s form against the other members of the Premier League’s ‘big six’, namely us, Manchester City, Chelsea, Arsenal and Tottenham. Tot these up and their record reads W3 D1 L3, so clearly there is an opportunity for us to exploit on Saturday.

There is no disguising the fact that Jose Mourinho would love nothing more than to win this game 1-0. He will set his side up to defend deep and in numbers, with Romelu Lukaku ploughing a lonely furrow up top – much like he did in the 0-0 draw between the sides at Anfield.

Indeed, you suspect Mourinho would even take a 0-0 right now; it would give his side some kind of platform ahead of their all-important Champions League tie with Sevilla next week.

It will come as no surprise to learn that the last three matches between us and United have finished 0-0, 1-1 and 0-0; Mourinho remains the master of feeding his own ego in his determination to avoid defeat at all costs.

So we are expecting a low-scoring encounter here, but we’ve written many times about how much more dangerous Liverpool look when playing away from home than they do at Anfield at times; the ability to counter attack at relish really does appeal for a side with this much pace and clever movement in the ranks.

So yes: we’re backing a Liverpool victory here. That option is available at a lofty 9/5 for punters, although the more conservative among you will lap up the 19/20 available in the Liverpool Draw No Bet market.

Under 2.5 Goals is available at around the even money mark, but if you really want to have a chance of cashing in then why not double up the unders line with Liverpool to win at a sultry 5/1.