There have been many pulsating nights of European football at Anfield over the years, and most will live on in the hearts and minds of Liverpool fans for decades to come. You wonder if Wednesday’s 3-0 win over Manchester City will join them in the pantheon of legendary continental performances.

On paper, at least, this was one of Liverpool’s greatest ever victories. Remember, this is a Manchester City side that has lost once in the league all season, and who have been largely unstoppable for the past six or seven months.

So to run up a 3-0 lead in half an hour courtesy of goals from Mo Salah, Alex Oxlade-Chamberlain and Sadio Mane is the stuff of legend, and the fact we were able to hold on to the clean sheet means we go to the City of Manchester Stadium next Tuesday as a heavy favourite indeed.

You wonder if the world of football will say a communal ‘thank you’ to Jurgen Klopp: he has twice shown this season that you can attack this Manchester City side, play without fear against them, and come away with a positive result. How may other teams will follow the Reds’ lead?

Of course, the cruel side of the beautiful game often rears its head in moments of glory, so in amongst the celebrations came the sad sight of Salah hobbling off just after half time. The Egyptian appeared to be holding his groin as he limped down the tunnel, and it will be touch and go whether he features against the Toffees on Saturday.

Ah Everton, that most curious neighbour of ours. It’s been a bizarre season for the blue half of Merseyside and most of their supporters – probably even their players too – will be looking forward to the summer so they can start afresh under Sam Allardyce in 2018/19.

That’s not to suggest they won’t be up for this game of course; not a bit of it. They would love nothing more than to knock us off our stride at such an important juncture of the campaign, and the feistiness which they have showed in our two meetings this term suggests they will be ready to mix it come Saturday lunchtime.

There is the very real prospect that Salah won’t take to the Goodison Park turf on Saturday. We await a formal diagnosis, and assume that he won’t be risked in any way if he’s not 100%. Games don’t come much bigger than Everton away, but a potential Champions League semi-final just about trumps it.

The good news is that Roberto Firmino, who was substituted after 71 minutes against City, is fine and well. The Brazilian was withdrawn to rest his legs, and he will lead the line against the Toffees.

Prior to the Manchester City match, Klopp was asked about the fitness of Emre Can. The manager replied that he maybe ready for Everton, or he may wait until Tuesday’s return fixture against City. You suspect that one of Jordan Henderson or James Milner will be giving a rest too, so maybe Gigi Wijnaldum will come in along with Can.

Otherwise, definitely out are messrs Matip, Gomez, Clyne and Lallana. 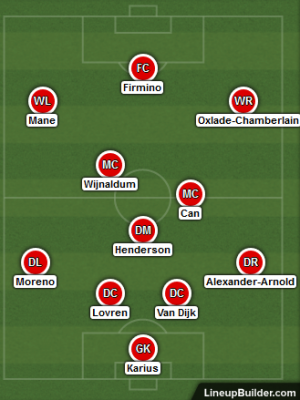 It has been a campaign of ribald inconsistency for Everton, and a run of just one draw in twelve (four wins, seven defeats) indicates that they can be good or awful from week to week.

The Toffees were dismantled by Manchester City last time out, ironically. Pep Guardiola’s men raced into a 3-0 lead after 37 minutes, and it was only when they took their foot off the gas in the second half that the Toffees were able to grab a consolation goal.

Other than that City game, Everton were unbeaten in four at Goodison Park (W3 D1 L0), and they do tend to save their best efforts for home soil. Will that count for anything on Saturday?

One of the other eye-catching stats from Wednesday’s clash with Manchester City is that Pep’s men failed to record a single shot on target against us; the first time this season they had suffered such a fate.

Part of the reason for that was how well Virgil van Dijk and Dejan Lovren played, and the other is the efforts of our midfield duo Jordan Henderson and James Milner, who worked tirelessly to restrict their opponents’ space.

We suspect that one of those two, if not both, will be rested against the Toffees, and knowing that Everton have netted in eight of their last nine starts the cogs turning.

We are unbeaten in 15 encounters with our neighbours, and you look at their current squad and you don’t really see that sort of quality needed to see off Liverpool.

That said, the Reds are odds-on to win with all bookmakers, and if Salah is injured – and a few others are rested – we may just lack a bit of penetration in the final third.

The best bet here has to be Over 2.5 Goals & Both Teams to Score at 23/20. We have confidence flowing through our veins going forward – Salah or no Salah, while Everton tend to score at home whether they are playing one of the big boys or otherwise.

Of course, we suspect Liverpool will win the match; we just wanted a more generous price for the bookies than what is available.