There was a worrying prescience to this column – rare indeed! – when we previewed the West Brom match last time out. We suspected that the Baggies, a proverbial footballing ‘wounded animal’, would put in a good performance on home soil in front of a largely disillusioned crowd.

Caretaker boss Darren Moore has had a bit of a Midas touch in the hotseat so far, and has clearly got his players singing off the same hymn sheet following a campaign of abject misery thus far.

We also mentioned heir prowess from set pieces, and how that would test a much-changed Liverpool backline….

As if by magic, West Brom scored twice from set plays to reel in our 2-0 goal lead and snatch a point; a frustrating result for Jurgen Klopp to take as it was very much from the ‘two points lost’ playbook. The manager, visibly irate, managed to blame everything but his own attention to detail when defending corners and free kicks.

“I don’t think that point will help West Brom massively, it is a complete waste of points. They don’t need it, we would have needed it,” was the manager’s strangest assertion. Perhaps West Brom should have just lay down, rolled over and allowed us to tickle their tummies?

“West Brom decided not to water the pitch at half-time and that makes it difficult,” was another excuse the German clung to. “It makes a massive difference. A team like West Brom do not need a wet pitch, they can do it next year playing on a dry pitch in the Championship.”

We all say things in the heat of the moment, but it was disappointing to see Klopp being so sanctimonious in ‘defeat’.

Never mind, life goes on and on Tuesday we face one of our most important matches in quite some time. The visit of Roma in the Champions League semi-final first leg affords us an excellent opportunity to not only bounce back, but also establish a sizeable lead to take to Italy for the second leg.

All roads have led to this point; let’s hope the boys can make it count.

The only good news that emanated from the West Midlands on Saturday is that we didn’t pick up any new injuries to worry about.

So messrs Matip, Can, Lallana and Clyne are our only absentees, and Klopp has essentially a full deck to play from on Tuesday.

How will he opt to play it? Happily, the back four and the front three pick themselves. Dejan Lovren will return at centre half alongside Virgil van Dijk, while full backs Andy Robertson and Trent Alexander-Arnold will also return to the starting eleven. Up front….well, you know the drill by now.

It’s perming three from four in midfield that is Klopp’s only real decision, with James Milner and Gigi Wijnaldum seemingly vying for the third spot alongside Jordan Henderson and Alex Oxlade-Chamberlain.

You suspect that one option would be to start Wijnaldum in this home leg for a more attacking outlook, with Milner replacing him in the second leg when we play on the counter in Rome. We really do need to bag a couple a couple at Anfield tomorrow. 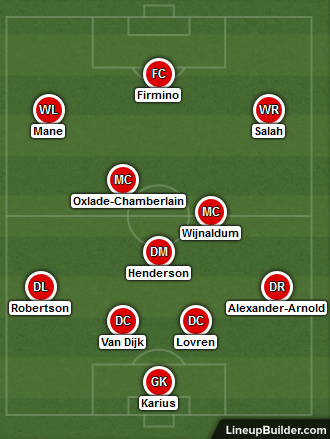 Roma are on a decent little run of form; no doubt prompted by their incredible win over Barcelona in their Champions League quarter final.

The Italians trailed after a 1-4 thumping at Camp Nou in the first leg, but they showed the importance of the away goal by stunning the Spaniards 3-0 at the Stadio Olimpico. It was the second consecutive tie in the competition that they had won via away goals after dumping Shakhtar out in the last 16, and that should serve as a warning to the Reds on Tuesday night not to rest on our laurels defensively.

Roma’s form in Serie A is pretty good too; they’ve lost just once in eight, winning five of those.

Liverpool vs AS Roma Betting Tips

We can throw around all sorts of stats ahead of games like this, but the one that really stands out is Roma’s poor record on the road in this competition so far this term.

In their five away matches in the Champions League 2017/18, Roma’s record reads W1 D1 L3, and in that five they have shipped a rather hefty 12 goals. Like we say, this first leg could be definitive; perhaps, like the Man City tie, we can put one foot in the next round – the final, no less – with another fine Anfield performance.

The Italians are an experienced bunch, and they won’t fear an intimidating atmosphere like the one we created for the City players on their arrival – that sort of thing happens every week in Italy!

But they will be fearful of our attacking prowess, especially as their back three contains Fazio, the hapless former Tottenham centre half, and the error-prone Juan Jesus.

Let’s just hope we’re celebrating a 3-0 or 4-0 win for Liverpool, rather than a 2-1 victory which would keep the tie very much alive…