As has been the case a few times this season, Liverpool were so close to attaining football perfection and then threw it away rather late in the piece. Five-nil up after 68 minutes in a Champions League semi-final….does it get any better than that? We were certainly close to sporting Valhalla thanks to braces from Mo Salah and Roberto Firmino and a single from Sadio Mane.

See the game out at 5-0 and you can book your flights to Kiev for the final; of course, that’s not Jurgen Klopp’s style, and as we went hunting for a sixth there as time for Roma to notch a pair of replies and – more importantly – away goals to narrow the deficit to 5-2.

The gulf between 5-0 and 5-2 is huge, and now we must head to the Stadio Olimpico and play our strongest eleven when we really ought to be preparing for a colossal end to the Premier League campaign.

Klopp has been burned twice by resting players with one eye on the Champions League, dropping points against Everton and West Brom which, if we are being honest, has probably cost us a shot at second place.

Unfortunately, given Roma’s late goals, lightning will presumably strike thrice on Saturday lunchtime and we will once again see a weakened Liverpool starting line-up take to the Anfield turf to battle Stoke City.

The other catastrophic bit of news emanating from Tuesday was the bad injury suffered by Alex Oxlade-Chamberlain. The young midfielder has been in fine fettle since hooking up with the Reds, and his absence causes a considerable problem given that Emre Can and Adam Lallana are also out with injury.

That means we have only three frontline midfielders – Jordan Henderson, James Milner and Gigi Wijnaldum. That is less than ideal.

So how will Klopp cope? There is the option of changing formation to something like a 4-2-3-1, which would give one of those midfielders a breather. But he would be loathe to change a system that has clearly worked so well this term, and so an alternative must be sought.

He could move Trent Alexander-Arnold or Ragnar Klavan into a midfield role, but perhaps the most likely option is that a youngster will be drafted in: Herbie Kane, the Under 23s captain, has a certain maturity, and a home game against a so-called ‘weaker’ opponent might just be an ideal debut for the 19-year-old.

Up front you would expect that two of Salah, Firmino and Mane will be rested, with Ings and Solanke coming in. Which two remains to be seen! 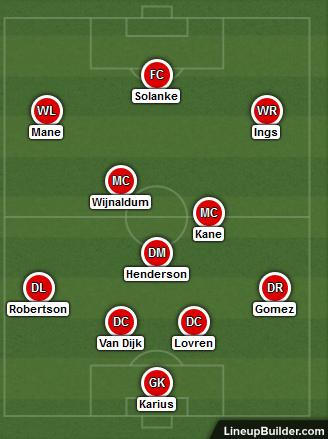 These are tough times for Stoke, who remain four points adrift of safety in the Premier League and having played a game more than their nearest rivals.

They need to take a minimum of seven points from their remaining trio of matches, you would feel, and that places a certain onus on them here.

Are they in strong enough form to cause an upset at Anfield? You wouldn’t have thought so. They’ve won once in 2018, and their last away win came way back in October. Tepid 1-1 stalemates with Burnley and West Ham have done little to raise aspirations recently, and this year alone they have lost 0-3, 0-3 and 0-2 to other top six sides in Arsenal, Manchester United and Manchester City.

As was the case against Everton and West Brom, it is tough to make accurate predictions as far as Liverpool are concerned when we suspect they will make changes to their starting eleven.

However, here’s a fun fact: Stoke have only scored two or more goals in 2/17 away games this term, and that shows the extent of their ambitions on the road. If they sit back and let Liverpool play here it could be disastrous for them; with or without Salah, Firmino and co.

But we have to recognise that the Reds simply won’t be as effective with Solanke and Ings in attack and without our big hitters; as evidenced by the 0-0 draw at Everton.

So we can make two assumptions: Liverpool will win this match, but it will be a low-scoring affair if we make wholesale changes to the starting eleven.