Once the dust has settled, there is no great harm to being knocked out of the Carabao Cup at such an early juncture. Less games means more focus can be applied to a league and European assault, and ultimately that can only be a good thing for Liverpool Football Club.

But losing a 100% record stings, and being defeated when you are the better team also leaves a sour taste.

We bossed large portions of Wednesday’s encounter with Chelsea, and despite both managers making eight changes to their starting line-ups it was clear that the Reds were better prepared for the game than their opponents.

Chances came and went for Sadio Mane, Naby Keita and Daniel Sturridge, who really ought to have done better when presented with a gilt-edged opportunity. It showcased the difference between match sharpness and otherwise.

Chelsea had spells of dominance, but it was no real surprise when Sturridge fired us in front with an excellent scissors kick.

But we couldn’t put the game to bed, despite the introduction of Roberto Firmino and Jordan Henderson, and there would be a late sting in the tail as first Emerson, from a dubious VAR given goal that looked off side, and then Eden Hazard, with a worldie, secured the win for the Blues.

We don’t have to wait long for a chance of revenge: we’re heading to Stamford Bridge on Saturday for a crunch Premier League collision.

The context will be completely different, of course. The starting elevens will look completely different, for sure, and the style of the game will presumably be different. Chelsea will dominate possession on home soil, but that’s okay: we quietly reckon the Reds are a more dangerous force when playing on the counter attack.

The added pressure of a battle for three points ensures Saturday’s clash will be rather more intense and dynamic than Wednesday’s exhibition outing.

Jurgen Klopp will, surely, revert to his strongest eleven here.

Yes, there’s a big game with Napoli next week in the Champions League, but the mission right now has to be putting Premier League points on the board in an attempt to put as much pressure on Manchester City as possible.

That means messrs Alisson, Trent Alexander-Arnold and Alberto Moreno will presumably return to the fray, while at centre half we await further news on the rib injury suffered by Virgil van Dijk. If he’s fit, he will presumably start at centre back alongside Joe Gomez.

The fact that Naby Keita and Fabinho played the vast majority of the midweek game hints that they may not be considered for duty on Saturday, with James Milner, Gigi Wijnaldum and Henderson the probable trio in the centre of the park.

Up front, barring injury, the trio of Firmino, Mane and Mo Salah will surely be reunited. 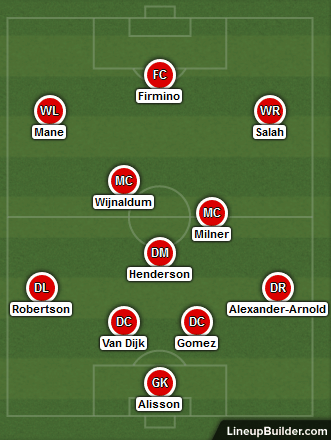 Chelsea’s form is good, by all accounts, and they remain unbeaten in all competitions in 2018/19 thus far.

Wednesday’s win was their seventh in eight starts, and so Maurizio Sarri should be applauded for changing the way the Blues play and bringing instant results into the bargain.

The introduction of Hazard and N’Golo Kante changed the game in midweek, and so clearly their form is linked to the presence of their most impressive performers.

When you reflect upon Liverpool’s results away from home against the ‘big six’ last season, alarm bells do start to ring.

A 0-5 defeat at Manchester City was followed by a 1-4 reverse at Tottenham, a gung-ho 3-3 draw at Arsenal, a 1-2 loss at Old Trafford and a 0-1 defeat at Stamford Bridge.

Whatever it is, Klopp’s strategy on the road doesn’t work in big matches, the evidence suggests, and it’s essential he finds a way to improve that this term.

The introduction of a sound goalkeeper should help, as will Van Dijk’s assuredness at the back. Henderson and Milner, acting as a double pivot in front of the back four, will add steel.

Hopefully, then, we won’t concede as many goals, and with our front three we know we are capable of winning any game.

The manager has tinkered by playing Salah through the middle at times, but here we want him doing exactly what he does best: operating in those half spaces between full back and centre half.

Chelsea don’t offer all that much going forward. Their fairly tepid possession game is offered pizazz only by Hazard, with three defensive midfielders and Alvaro Morata, devoid of confidence, hardly setting the world alight in an attacking sense.

Quite simply, we can see the Reds nicking this one by the odd goal, but let’s batten down the hatches with a Draw No Bet wager at 8/11.

If you like extra value plays, take the Under 3.5 Goals market at 1/2 as well: the manner in which Chelsea are set up, that won’t be breached in too many of their matches this season.