The dangers of the international break to club sides have been laid bare this week as the queue for the Liverpool treatment room gets even longer. Mo Salah injured himself while scoring direct form a corner for Egypt – sometimes, the luck really isn’t with you, and the thigh strain suffered has kept him out of training until Thursday, when he is rumoured to be returning to the fray.

Sadio Mane somehow managed to break his thumb so badly while training with Senegal he had to have an operation this week.

“The surgery, conducted at a north-west hospital and supervised by club medics, was successful,” read a club statement. “Mane’s recovery will be monitored over the next couple of days ahead of the Reds’ return to action at Huddersfield Town on Saturday.”

Naby Keita was photographed being helped off the pitch by a teammate when on Guinea duty, and his injured thigh will need a scan to identify the extent of the damage.

Meanwhile, Holland boss Ronald Koeman has come out and said that Virgil van Dijk has been playing with two broken ribs for weeks. He sat out Holland’s friendly with Belgium earlier in the week, and with the Reds having a Saturday-Wednesday double-header of fixtures his fitness will need to be carefully monitored.

Add into the mix the hamstring injury James Milner suffered against Manchester City last time out, plus the long-term absence of Alex Oxlade-Chamberlain and Adam Lallana, and it’s fair to say Jurgen Klopp is being hampered by an injury crisis of epic proportion right now.

If you were being unkind to the teams involved, you might argue that at least it hasn’t come at an all-important juncture of the campaign. A trip to Huddersfield on Saturday evening, followed by a Champions League date with Red Star Belgrade on Wednesday at Anfield, isn’t the most disastrous of fixture lists, although it is still imperative not to drop points at this stage of the season.

The manager will need to think very carefully about who plays where in the coming week.

Which, if any, of Liverpool’s injured stars will be risked against Huddersfield?

The early indications suggest that Van Dijk and Milner will be fit to start against the Terriers, and you’d wager that Klopp would want at least one of Salah or Mane to feature so that his frontline isn’t too badly disjointed.

With Daniel Sturridge chomping at the bit no risks are necessary in attack, however, and the good news is that Jordan Henderson, Trent Alexander-Arnold and Joe Gomez weren’t too heavily involved for England in their pair of recent matches.

Alisson and Roberto Firmino both played for Brazil against Argentina in Saudi Arabia on Tuesday, but the hope is that they will return fresh and without jet lag. 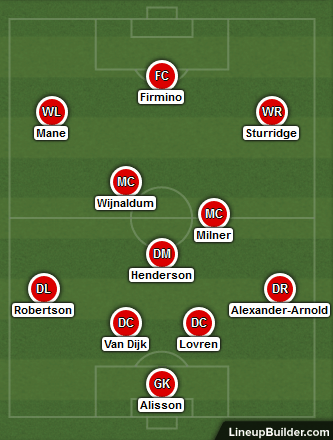 You’d imagine that Huddersfield couldn’t wait for the international break to come along.

Prior to the enforced lay-off they had lost three on the bounce – Crystal Palace (0-1), Leicester (1-3) and Tottenham (0-2) – before earning a point against Burnley.

The Yorkshiremen are yet to score a goal, let alone win, on home soil this term.

Naturally, we expect Liverpool to win this game no matter how badly patched-up the starting eleven may be.

The signings made by Klopp in the summer ensure we have plenty of squad depth, and so even if one or two regulars have to miss out we can still field a side that is more than capable of getting the job done.

The Terriers’ bark is worse than their bark – their fans have been waiting 360 minutes for a Premier League home goal, and they too are struggling with injuries. The likes of Terrence Kongolo and Philip Billing will miss out on Saturday, while Aaron Mooy and Christopher Schindler, amongst others, face a race against time.

You would assume that one of Salah and Mane will watch on from the stands – that’s the information doing the rounds at the time of writing, and while Sturridge has been in dazzling form this term you would still expect a lack of flow and rhythm about the Reds’ attacking play.

Without Keita the midfield looks to be a rather conservative trio, and so perhaps this game may degenerate into a low-scoring affair where key moments will decide matters.

Liverpool still have more match winners than Huddersfield, it’s as simple as that, and the presence of Van Dijk ensures we remain calm and composed at the back.

From a betting perspective, there aren’t too many angles that appeal and so we’re only going to serve up one option: Liverpool to Win & Both Teams to Score (No) at 10/11.