Everyone wants to win with style, but all that matters is getting the job done and taking the three points home with you. And that’s exactly what Liverpool did on Saturday after a hard-fought victory over Watford; a fixture that may well have just caused us a few headaches in years gone by.

This Reds side can get things done in more than one way, and we showed both aspects of our game against the Hornets.

Our opposition sat back and allowed us to dominate possession in the early going, and after huffing and puffing we eventually found an opener courtesy of Mo Salah.

At this point we were able to switch to Plan B; defending deep before counter attacking with gusto.

Trent Alexander-Arnold scored a wonderful free kick, before Andy Robertson got free down the left in another scintillating break before the ball fell to Roberto Firmino, who prodded home a third.

Yes, Watford perhaps ought to have been given a penalty, and yes, Jordan Henderson’s sending off was something of a dampener on the day, but that’s three more points in the bag and maintains the pressure on Manchester City at the summit of the Premier League table.

All confidence is welcome ahead of a hectic week in which we face a crunch Champions League clash in Paris on Wednesday before tackling Merseyside neighbours Everton on Sunday.

Victory over PSG would all but book our spot in the Champions League knockout round, and even a draw would be handy prior to a campaign-closer at Anfield against Napoli.

With Henderson out of the Merseyside derby on Sunday, he will perhaps be given the nod to start on Wednesday should his fitness allow.

A Henderson-Milner midfield shield looks ideal against a PSG side brimming with attacking talent, although Jurgen Klopp may opt to field Fabinho instead. The former Monaco man has played against PSG countless times, and that experience cannot be underestimated.

Naby Keita was an unused substitute on Saturday, and that may mean he is being treated with caution ahead of Wednesday’s game, or that simply he was not 100% fit. Either way, it appears as though the manager trusts Gigi Wijnaldum with the midfield mantle in these big European games.

Joe Gomez missed the trip to Vicarage Road with an ankle injury picked up in training, but he will surely return to the defence against the Parisians. “In the last second of yesterday’s session, he got a little knock,” Klopp said.

“We thought ‘come on, let’s bring him and have a look in the morning’. He said it was 80% better, that’s good. So he’s no doubt for Wednesday.”

Otherwise, we can expect the manager to field his perceived strongest eleven as he looks to close out a successful Group C campaign. 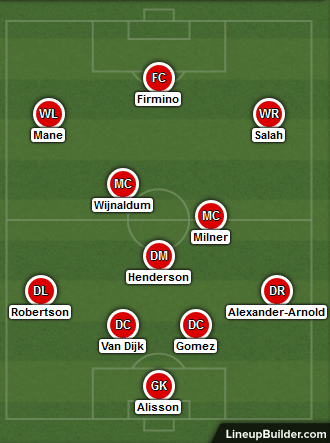 It’s always difficult trying to assess the strength of PSG.

They’re a side that has invested many millions into their squad, and who for all their dominance in the French Ligue 1 can’t quite seem to take the next step in the Champions League.

It’s a theory that has played out once more in 2018/19, with the Parisians currently enjoying a perfect record in Ligue 1 of 14 wins from as many matches.

But in the Champions League, they have struggled to some extent.

We enjoyed a 3-2 victory over them at Anfield in a seesaw contest that saw us go 2-0 up before requiring an injury time goal from Firmino to clinch the points.

Since then, they’ve thrashed Red Star Belgrade 6-1, drew 2-2 at home against Napoli (where they needed an injury-time goal of their own to nick a point) before securing another draw in the reverse fixture in Naples.

As glass half-full types, we maintain that Liverpool have nothing to fear from a trip to the Parc des Princes.

Napoli proved as much when they took on the Parisians toe-to-toe on their own patch, and actually our ability to counter attack really does set us up for a night of beautiful football in the city of love.

And to make matters even more interesting, it looks as though key duo Neymar and Kylian Mbappe will be back fit for PSG, but will they be 100%? “I am more optimistic than yesterday about Ney and Kylian. They will be able to train on Monday,” said their boss Thomas Tuchel.

Only two days training ahead of such a big game? We’ll take that.

The bookies make PSG favourites, but they are hardly writing off our chances at 21/10; their won’ be many available at such shorts odds when travelling to the Parc des Princes.

We have just one bet to make for this game, but it’s a confident odds-against wager: Liverpool in the Draw No Bet market at 11/8.