After a welcome break from domestic action, it’s back to the nitty gritty for Liverpool FC as we look to stamp out authority on the Premier League table heading into the festive period. The international break is a bleak time for all club sides but especially for the Reds, with so many of our players representing their countries in far-flung corners of the globe.

The good news, at the moment, is that there doesn’t appear to be any new injury problems for Jurgen Klopp to worry about, and so the self-confessed critic of the UEFA Nations League can breathe a sigh of relief!

The manager spoke at a gala dinner in support of the LFC Foundation this week, and while he has been pleased with his side’s unbeaten start to the domestic campaign, he believes there is plenty more to come.

“We can improve – we have to, and we will. But between our best football and now, we have to win football games. That’s how it is and that’s what we’ve done already,” Klopp said.

“It’s all good, I like the season. There has been a lot of improvement so far and there is still space for further improvement. But a very intense period is coming up now.”

Hopefully the gaffer will be feeling similarly enthused after the weekend’s trip to Watford. We’ve won nine of our last eleven matches against the Hornets, and so a run-of-the-mill three points will do very nicely here ahead of Wednesday’s crunch Champions League trip to Paris to take on PSG.

Klopp has been handed a boost by the timely return of Jordan Henderson to full training.

The midfielder will surely feature against the Hornets or PSG, and his experience in the middle of the park will be key as we look to negotiate two tough fixtures.

Otherwise, there are no new injuries to worry about, and it is simply deciding who is fit enough to start after their international excursions that will decide who gets the nod against Watford.

You would think all of the Europeans would be able to start – most were less than three hours away during the internationals, and even the Brazilian duo of Alisson and Roberto Firmino should be fine: they played both of their friendlies in England!

Mo Salah was bag in Egypt, scoring for his side in a 3-2 win over Tunisia, but the good news is that match was played last Friday, so he has had plenty of time to recover.

The biggest concern is Sadio Mane, who had a rather torrid time while on Senegal duty. He missed a gilt-edged chance in his side’s 1-0 victory over Equatorial Guinea, and for reasons unknown that caused his own fans to boo him throughout the match.

The winger collapsed in tears at the final whistle, and we can only hope he has suitably recovered from that ordeal. The chances are that he will simply want to get stuck straight back into doing what he does best. 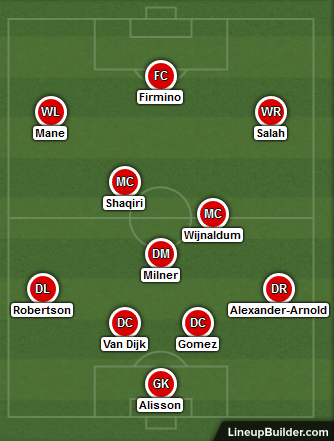 The international break has a knack of ruining the momentum – good, bad or indifferent – that a team has been displaying.

The Hornets were going through a rather inconsistent run of form prior to the internationals. They had beaten Huddersfield and Wolves to rocket up the Premier League table, but then were beaten by strugglers Newcastle and dropped points against Southampton.

In short, it’s very difficult to get an accurate read on Watford’s form, although their home record (W4 D0 L2) confirms that they deserve respect.

Making predictions immediately after the international break is always tricky, but the good news is that this time around Liverpool don’t appear to be too badly affected.

Less jet lag and fatigue means that Klopp can name a strong starting eleven here, and while of course he will have one eye on the PSG clash he also won’t want to lose ground on Manchester City here.

The bookies make Watford a 5/1 shot and Liverpool a short 11/20 favourite, and really you might make a case that of the pair the Hornets are the more appetisingly priced.

Happily, we can back the Watford +1.25 Asian handicap at the 8/11 mark. We accept that Liverpool will (hopefully) win the match, but if that is by just a solitary goal then we can still profit from our wager.

Curiously, only one of our last six league matches has witnessed three or more goals; probably because we are defending so much better these days. Likewise, that Over 2.5 Goal line has only been breached in two of Watford’s last seven, so we’re happy enough backing the unders line at a princely 6/4.