We’re going about our business in fraught fashion, but Liverpool keep grinding out results; a trait we’ve been lacking for the past couple of years. When Jack Cork fired Burnley ahead on Wednesday evening it was very much a case of here we go again. But James Milner equalised and then along came the cavalry: Jurgen Klopp sending on Mo Salah and Roberto Firmino from the subs’ bench.

It was a move that paid instant dividends, with Firmino tapping home to put the Reds ahead and then, in injury time, with Burnley pressing for an equaliser we executed the perfect counter attack with Xherdan Shaqiri applying the finishing touch.

It was a solid, if unspectacular, performance, and one which only really sparked to life in the last half-hour when the Egyptian and the Brazilian were introduced.

Still, there were enough positive signs to send even the most pessimistic of Liverpool fans home happy, including the efforts of Naby Keita, who earned the man-of-the-match award for an all-action display. More of the same from the Guinea international and he will become a must-pick.

“We made life difficult for ourselves,” Klopp said afterwards. “We controlled the game in a lot of moments. The second half was the perfect reaction, and I’m really happy about the three points.”

Onwards we march into what is a tricky and defining week for the Reds. On Saturday there’s a tough lunchtime visit to Bournemouth – they are certainly no slouches – and then on Tuesday we face the all-or-nothing Champions League clash against Napoli. Follow that with a trip to Old Trafford next Sunday, and well: it’s a big eight days, put it that way.

There really is no hiding place for the boys in red for the next week or so.

Given our hectic upcoming schedule, change was necessary against the Clarets.

That’s why the likes of Andy Robertson and Gigi Wijnaldum were given the night off, and why messrs Salah, Firmino and Alexander-Arnold were named only as substitutes.

That gave a chance to others, and while Alberto Moreno, Daniel Sturridge and Divock Origi did okay, we simply aren’t the same side without our big guns.

We would expect some to return against the Cherries on Saturday, although with a couple of injury doubts it may be another mix-and-match style selection from the manager.

Joe Gomez took a nasty kick on the ankle against Burnley, and while the extent of the damage is currently unknown he presumably won’t be ready for the weekend. With Nathaniel Clyne carrying a bit of an injury, Trent Alexander-Arnold is the sole right back – not accounting for the versatile Fabinho.

Sadio Mane’s cut foot suffered against Everton required stitches, and so he too may be held over until the Napoli game.

The big question will be whether Naby Keita, in and out of the side this term, has the legs for another 90 minutes as soon as Saturday lunchtime. 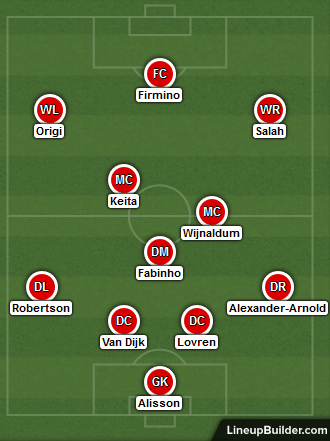 They are a strange side, Bournemouth, in that they seem capable of brilliance or incompetence without warning.

The Cherries started the campaign well (W6 D2 L2), but they then stalled with four straight defeats: a trio of 1-2 scorelines (Manchester United, Newcastle, Arsenal) and a 1-3 (Manchester City).

They rallied in midweek with a 2-1 victory over Huddersfield, and a strong home record (W4 D2 L2) shows they will be a tough nut to crack on Saturday.

One thing that both of these teams bring to the party is goals. Some 12 of Bournemouth’s 15 Premier League outings have witnessed three or more goals, and while Liverpool don’t match those numbers that’s because of our improvement defensively.

The Cherries have netted at least once in seven of their eight home matches, including two or more in five of those, and they even scored at the fortress that is the Etihad Stadium last week.

With fitness concerns to Gomez and Robertson, plus the possibility of Van Dijk being rested ahead of a hectic week, it would be arrogant of us to suggest that the Reds will keep Bournemouth at bay.

The thing is that our hosts aren’t the strongest defensively – they’ve shipped in 11/15, including two or more in eight – and so our natural attacking instinct could lead us to victory.

But this is a tough fixture, and Liverpool’s price of 4/6 does not reflect value.

So goals have to be our play in this one, and we were delighted to see Both Teams to Score & Over 2.5 Goals available at even money with a number of different bookmakers.