A Premier League title eliminator on January 3rd? Okay, it’s not as straightforward as that – life, and certainly football, never are, but let’s not beat about the bush: Thursday’s match will have a colossal impact on the destination of the famous trophy.

A victory for Liverpool would take us ten points clear of City and nine ahead of Tottenham; a side that many would suggest aren’t genuine title contenders.

Three points for our opponents, however, would blow open the title race once more, and a draw – as City’s most famous fan Liam Gallagher might deduce – would simply be a case of ‘as you were’.

At least we head into one of the biggest matches of the campaign so far in high spirits. The unbeaten record in the league is one thing, but the last six outings have been something else: six wins, 21 goals scored, three conceded.

The latest of those was the 5-1 mauling of Arsenal, who might feel quite fortunate to have only conceded the five.

Again, we showed immense character – possibly the one ingredient missing from this Reds side last season – to come back after going an early goal down. Bobby Firmino equalised just three minutes after the Gunners’ opener, and that laid the foundation for a superb hat-trick from the Brazilian, who looks to have his mojo back.

Sadio Mane, who enjoyed a fantastic game in which he ran Stephan Lichtsteiner absolutely ragged, also netted in the first half to establish a 3-1 cushion, and Mo Salah – it wouldn’t be a Liverpool win without a goal from the Egyptian – put the game to bed with a penalty in first-half injury time.

In the second period Salah handed the ball to Firmino when we were awarded another penalty; a move which nearly brought Jurgen Klopp to tears. “[Salah] gave the penalty to Bobby, and I almost cried because we all know how much Mo wants to score goals. It was really nice.”

And so on to Thursday, when a trip to Manchester awaits. You sense we’re 90 minutes away from taking another huge leap towards the Premier League title.

The omens are good when you can get through the manic festive fixture schedule largely injury-free.

Joel Matip and Joe Gomez were already on the shelf anyway – both will return in January, and the physio’s room has only otherwise been troubled by James Milner, who has picked up a niggling hamstring strain.

The good news is that he has returned to full training, and will surely get the nod against City if fully fit.

Otherwise there are no major problems, and Klopp has the luxury of fielding his strongest available eleven. Our next game comes on Monday in the FA Cup against Wolves – a competition Klopp hasn’t always taken that seriously.

So, he will demand one huge effort against Pep Guardiola’s side on Thursday, with his nominally best eleven taking to the field.

That will mean the usual back four – Alexander-Arnold, Lovren, Van Dijk and Robertson – plus a midfield shield of Milner and Henderson.

Mane will play left and Gigi Wijnaldum may just shuffle slightly out to the right; his work rate will help to double up down the flanks where City are so dangerous.

And through the middle, Salah and Firmino will continue their profitable link-up. 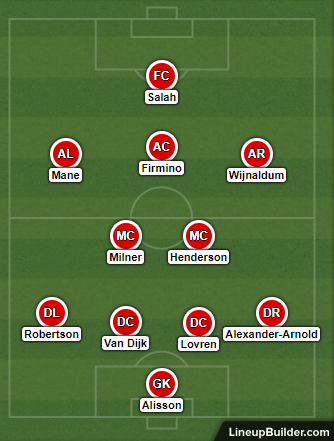 The vultures were circling on City after they lost three out of four Premier League matches in December.

A 0-2 loss at Chelsea is explainable, if not ideal, but losses against Crystal Palace and Leicester are not the mark of a potential league champion.

The ship was steadied with victory at Southampton a couple of days ago, but there are clear vulnerabilities in a side which has not kept a clean sheet since November.

And that, really, could be the tale of the tape ahead of this encounter.

If Manchester City have conceded in each of their last seven matches, how can they expect to keep a clean sheet against a Liverpool side that is in rampant mood, averaging more than three goals per game of late?

And they will probably need to do so without Kevin de Bruyne, and with a gaping hole at left back with Benjamin Mendy injured and Fabian Delph suspended.

City are the 11/10 favourites with the bookmakers to win this match, but sorry we just don’t see how: Liverpool are a much more settled side, in great form, and with a decent record against the Mancunians in recent times.

Optimistic Reds fans will go straight for the 5/2 available about a Liverpool victory; the more cautious can take advantage of stunning odds of 8/11 about us to win or draw on Thursday in the Double Chance market.