Once again we made life difficult for ourselves, but once again the Liverpool players showed the character and resolve to dig themselves out of a hole at Southampton.

Shane Long’s early goal on Friday night threatened to derail our title tilt, but the Reds showed the composure necessary to succeed in these races to the finishing line. Our class, in the end, shone through at St Marys.

Naby Keita finally bagged his first goal in a Liverpool shirt – a decent header it was too – to draw us level after 36 minutes.

Then followed an impasse, in which despite enjoying 70% possession we were unable to break down the Saints’ well-drilled two banks of four.

Nerves were frayed and nails chewed down to the quick, but as has been the case more than once this term a late rally saw us home.

First Mo Salah sprinted half the length of the pitch as we scored the ultimate counter-attacking goal, finishing well as the Southampton players backed off the Egyptian.

And just five minutes later the ball broke kindly to Jordan Henderson in the penalty area, and he despatched it into the back of the net to secure a 3-1 win and once again mount the pressure on Manchester City, who were in FA Cup action at the weekend.

Dreams of a first Premier League title can be put to one side temporarily as we entertain FC Porto in the Champions League quarter final first leg on Tuesday.

We are expected to come out on top against the Portuguese outfit, who themselves are locked in a tight battle at the top of their domestic division, but complacency must not become an issue as we look to battle for silverware on two fronts between now and the end of the campaign.

Jurgen Klopp sprung something of a surprise on the south coast by resting both James Milner and Jordan Henderson from the outset.

As it turned out, both came onto the field after roughly an hour, and the presumption otherwise would be that the manager would have picked both for the Anfield tie on Tuesday.

Whether he still will remains to be seen, but Naby Keita – short of match fitness – is unlikely to start again and so there are opportunities in midfield. As it stands, we suspect that Milner, Henderson and Gini Wijnaldum will get the nod.

Other than that, it could be as you were. Klopp will be desperate to take a win and a clean sheet to Portugal, so we don’t anticipate any other changes to his side.

And none are enforced either, with Oxlade-Chamberlain, Gomez and Lallana the only injury absentees at present. 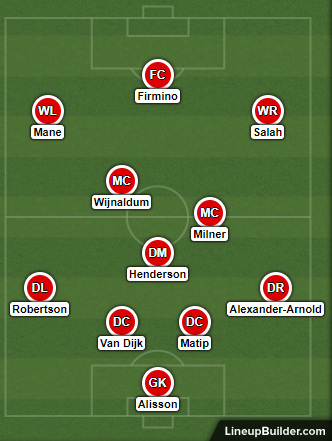 As mentioned, Porto are in a right old ding-dong battle with Benfica in the Portuguese Primeira Liga.

Both teams are on 69 points at the summit of the table, with goal difference the only thing keeping Porto from the top spot.

They enjoyed a successful group campaign in the Champions League as well, finishing top of a quartet that featured Schalke, Galatasaray and Lokomotiv Moscow.

They then went on to beat Roma 4-3 on aggregate, with an extra time penalty from Alex Telles enough to see them through. Having lost the first leg in Italy 1-2, it was a tremendous turnaround from Sergio Conceicao’s men.

We underestimate FC Porto at our peril; this is clearly a side capable of winning matches both as favourites and as underdogs.

The emphasis from Klopp here will be on keeping a clean sheet, first and foremost, which is perhaps why Milner and Henderson will both start as extra security in midfield. We won’t commit too many bodies forward.

Here’s an interesting fact: Porto won’t have played a side as good as Liverpool at any point this season. However, we have tackled many teams as strong as Porto….which of course is a fantastic omen.

They won’t want to play too freely in an attacking sense either, and something akin to a chess match on grass could unfold on Tuesday.

And so our first instinct is to back a low-scoring Liverpool victory, which we can do in a handful of different ways.

We can always wager on Liverpool to Win & Under 2.5 Goals, an option presented at a lovely price of 13/5, or we can even cast the net wider by Dutching a couple of choices in the correct score market: 1-0 and 2-0 to Liverpool are available at 7/1 and 6/1 respectively.