It was telling, perhaps, that after Liverpool’s pulsating 3-2 win over Newcastle United on Saturday that Jurgen Klopp said we had ‘qualified for our final’.

It was easy to get carried away in the emotion of Divock Origi’s 86th minute winner following a titanic collision with the Magpies, and the manager confirmed it was something of a slip of the tongue by referencing Tuesday’s Champions League semi-final second leg later in his interview.

But perhaps it raised a salient point: with a three-goal deficit to overcome against Barcelona, perhaps Sunday’s encounter with Wolves should be the focus of our attention – regardless of how Manchester City fare against Leicester on Monday.

We climbed back to the summit of the Premier League table with victory at Newcastle, a hard-fought win against a Rafa Benitez side that was clearly up for the job of playing their part in the final throes of the campaign.

When Virgil van Dijk nodded home the opener we were hoping for a comfortable enough evening in the north east, but Christian Atsu changed all that when he fired home from close range to equalise after 20 minutes.

Mo Salah volleyed home from Trent Alexander-Arnold’s cross to give us the advantage once more, and it stayed that way until Salomon Rondon powered home early in the second period.

There was that fear that two points were ebbing away during an entertaining second half, but then that man Origi struck – as he had done in the Merseyside derby earlier in the campaign – to ensure the title race goes down to the final day no matter what happens on Monday evening.

Of course, there is that Champions League game to navigate on Tuesday, and be under no illusions the lads will give it everything to overturn that three-goal deficit.

But there is, arguably, a more meaningful prize on the horizon come the weekend.

There were two rather monumental bits of team news that emerged from the Newcastle game.

The first came on the eve of kick off: Roberto Firmino has a ‘muscle strain’ and is certainly out of this game, and is also touch-and-go for Wolves on Sunday.

And then there was the worrying sight of Mo Salah being stretchered off with a head injury following a collision with the Newcastle goalkeeper. At the time, it did not look good.

But Klopp has since confirmed the Egyptian’s condition is not as bad as first feared. “When we came in, he was sitting in the dressing room and had watched the game. He was then fine but of course we have to wait. He got a proper knock in that situation. We’ll have to see,” he said.

It might be a close call for him to be involved on Tuesday given the new rules regarding concussion-based injuries, and a decision probably won’t be made until the day as to whether Salah starts or not.

The other confirmed absentee is Naby Keita, who has a ‘high-grade abductor injury’. The midfielder won’t be seen again this season. 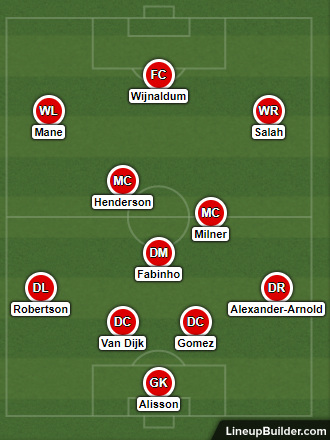 History is the best judge, of course, but it may just turn out that this Barcelona side is amongst the best of the modern era for the Catalan giants.

They may not have the households names – Messi, Suarez and Coutinho aside – but this is an outfit that has cantered to the La Liga title and has conceded just one goal in five Champions League knockout games.

They have one foot in the final, let’s be honest, and will be looking to complete a historic double come June 1.

How will this game pan out?

You wonder if the players will have one eye on Sunday, where they could secure their place in Liverpool FC folklore as the first Premier League winning team in the club’s history.

But, of course, there will be plenty of professional pride in at least beating Barcelona on Tuesday, whether we can overturn the 0-3 deficit or not.

The concern is that this Barcelona side could be deadly on the break; and there’s really no need for them to force matters here.

Liverpool are the favourites with the bookies – bearing in mind we could be without Firmino and Salah, and so in a rare move we might just be tempted to back Barcelona in the Double Chance market at an appealing 4/5.

If you want to extend your value further, the Barcelona Double Chance and Both Teams to Score double-header can be backed at 8/5.

Post Tags:
Homepage » Match Previews » Liverpool vs FC Barcelona Betting Tips (07/05/19) – A Free Hit for the Reds Against the Best in the Business