It’s a journey that started in September last year, and all of the hype and expectation comes to an end on Saturday when Liverpool tackle Tottenham in the final of the Champions League. The time for talking is over. Now is the time for action.

The dust has settled on the Premier League title race now. It was a huge disappointment not to be lifting that trophy after a season of hard graft, toil and no small amount of quantity, but the players can take some solace – if any can be found – in knowing that their points haul of 97 would have been enough to secure the title in pretty much every year of the competition to date.

But redemption in Madrid at the weekend will be very sweet, and will be just deserts for the brilliance that the Reds have shown this term.

Standing in our way is a Tottenham side that has twice gone to the well against Manchester City and Ajax just to reach this final. They are a high quality outfit that owes much of their success to the tactical brilliance of Mauricio Pochettino, the dynamism of Son Heung-Min and the late-blooming excellence of Lucas Moura.

Notice we didn’t mention Harry Kane there. The England frontman has been out injured for the past few months, and Spurs have coped just fine without him. Indeed, some pundits are of the belief that they are a better all-round team when Kane isn’t in the starting line-up.

He has thrown his hat into the ring to start in the final, which makes Pochettino’s job all that harder. Does he start with Kane, or show loyalty to the likes of Llorente and Moura? Who cares, that’s his problem, not ours!

Assuming our couple of injury doubts have resolved themselves before Saturday, we know the likely Liverpool starting eleven that will take to the pitch at the Wanda Metropolitano Stadium.

It’s an eleven packed with quality, guile, passion and power. And it’s one that is destined for ultimate Champions League glory.

Notable by his absence in the final weeks of the campaign was Roberto Firmino.

The Brazilian has been struggling with a muscle injury for a while, but he was part of the training camp in Marbella and even took part in some high intensity drills.

“Bobby trained, was part of training last week and looked really good, everything was fine. Then we took him out again. He will be in training from tomorrow on again,” Jurgen Klopp said at a media event on Tuesday.

Andy Robertson played through the pain barrier against Wolves on the final day of the campaign, but the Scot has confirmed he is now fine and back to 100%.

There’s not such good news for Naby Keita, however, who is expected to be on the sidelines for a good while yet. “[There is] no chance for Naby,” Klopp confirmed. “He is really progressing well, we will see how it will work out for him for the Africa Cup of Nations. We don’t know that yet.”

And so the manager almost has a full strength squad to work with, and that gives him plenty of options to consider.

If Harry Kane doesn’t play for Spurs then Fernando Llorente might start through the middle. The burly Spaniard will need to be closely monitored by somebody that is strong in the air, so expect Joel Matip to partner Virgil van Dijk ahead of Joe Gomez or Dejan Lovren.

In midfield, Klopp will be keen to get the balance right. He will be looking for legs and guile, and so perhaps the triumvirate of Fabinho, Jordan Henderson and Gini Wijnaldum is the way to go. There’s always the experience of James Milner to call on from the bench.

In attack, well, you probably know the drill. The manager has experimented with Wijnaldum in a false nine role in Firmino’s absence, but we expect the Brazilian to return here and help to fire the Reds to glory. 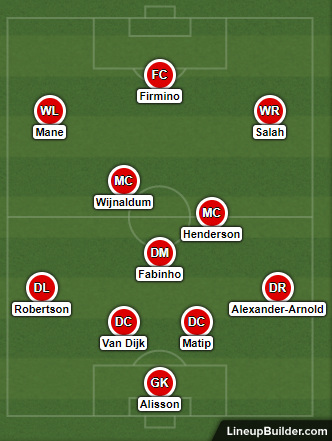 It was a strange old ending to Tottenham’s season.

Clearly, they put all of their eggs in their Champions League basket, and thus sacrificed Premier League form – winning just one of their last five but still somehow clinging on to a top four finish.

And of course their conclusion to this tournament was odd too. The 3-4 defeat at Manchester City was a thoroughly entertaining game that highlighted some of their defensive vulnerability – especially in wide areas, and lest we forget with 45 minutes of their tie against Ajax left they were trailing 0-3 on aggregate.

This Tottenham side has a habit of just about getting a job done, by hook or by crook.

How many more times can Tottenham go to the well in the Champions League?

It’s a fair question, and while we ourselves had a Lazarus-like comeback against Barcelona, Spurs have been fighting the tide ever since the group phase, where they looked likely at one point to exit the competition.

They simply haven’t been dominating games in the past few months, and eventually the energy usage in perennially chasing a result will mount up and sap the strength of even the hardiest of souls.

Liverpool will look to dominate this game with our trademark front-foot style, and one of the areas we feel particularly confident about is out wide, specifically the Robertson-Mane combination up against Kieran Trippier, who has not had the best of seasons.

If we can double up on the right back, we might just find plenty of joy.

Tottenham may play on the break with Son and Moura leading the line, and their pace and directness will have to be closely monitored.

The Reds won both Premier League meetings with Tottenham 2-1, and that gives a flavour of how this match may pan out as well. There will be chances at both ends of the pitch, but Liverpool’s experience in last season’s Champions League final will surely pay dividends here.

At odds of 19/20, there is no need to search elsewhere for betting value: back Liverpool to win this Champions League final inside 90 minutes.