Well, try and put that into words! The atmosphere at Anfield on Tuesday night was electric half an hour or more before kick off against Barcelona, and there was a feeling in the air – rarely uttered, but perceptible – that maybe, just maybe, Liverpool FC could pull off yet another footballing miracle.

The team news filtered through: no Firmino (we knew that already) and no Salah, who was touch and go throughout Tuesday.

No strikeforce? No problem. Divock Origi, so often a frustrating figure – talent for days, but only rare glimpses of end product – produced the goods early on, tapping home after just seven minutes. The comeback was very much on.

There were no further goals in the first period, but a growing sense that the Reds were very much in the game.

But then fate played its hand once more. Andy Robertson, unbelievable at left back this season, suffered an injury and was hauled off at half time. Jurgen Klopp shuffled the deck, with Mr Reliable, James Milner, slotting in on the left and Gini Wijnaldum coming on in an advanced role in midfield.

It proved to be a masterstroke.

The Dutchman scored twice in two minutes early in the second half, first firing home from Trent Alexander-Arnold’s cross and then nodding home from Xherdan Shaqiri’s pass.

Anfield was understandably rocking, and with the Barcelona players shell-shocked in truth there was only likely to be one winner.

That came in the 79th minute. The Barca defenders were dozing when Alexander-Arnold’s clever corner found Origi, who prodded home to precede an almighty roar from the Kop.

There were a couple of scares, but the lads had done it: Liverpool are in the Champions League final on June 1.

Let’s stick a pin in that for the moment, because there’s still a league title to be won.

Look, let’s be honest, all we can do is beat Wolves at Anfield and then hope Manchester City fluff their lines at Brighton. Nothing but victory will do.

Let’s go through the injured player list one by one. First up is Mo Salah, who missed the Barcelona game with the repercussions of his head injury suffered against Newcastle.

“It’s not good enough from a medical point of view,” Klopp said before the Barca game. “He is desperate to play but we cannot do it.”

The manager confirmed that the Egyptian has concussion, and that usually takes a week to clear. He is, however, a probable rather than a possible for the Wolves game.

As for Bobby Firmino, the prognosis is not quite so good. “He still has problems, he’s not even in the squad,” Klopp said prior to the Champions League semi. “The medical dept said ‘no chance’. It doesn’t look good for midweek, no, it is not really likely.”

The Brazilian has a slight muscle tear, and those generally take a couple of weeks to clear up.

Robertson hurt his calf on Tuesday evening, and he had to be withdrawn. “They’re confident that it’s just a nerve or whatever and it can be maybe a couple of days, but we’ll wait and see,” the Scot said.

So perhaps he too will be sidelined. It’s a conundrum for Klopp to solve ahead of a must win game, that’s for sure. 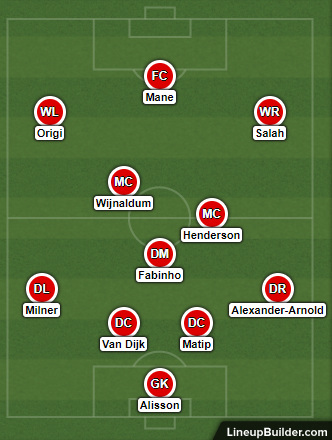 At this time of the season, sometimes teams can be accused of being ‘on the beach’ with their top flight status secured, but you couldn’t level that accusation at Wolves.

The Midlanders are unbeaten in four despite, nominally at last, having nothing to play for, and that run includes three straight victories over Arsenal (3-1), Watford (2-1) and Fulham (1-0).

The All Gold really do want to finish in seventh place as the ‘best of the rest’, and they are going about it rather well.

You can massage stats in many different ways at times, but there’s no denying the fact that Wolves have won just one of their last six away games.

Three of those were defeats to bottom six sides – it has been an accusation this term that the Midlanders haven’t turned up at times against weaker opposition, but their record against the big six of W4 D4 L3 really does stand up to scrutiny.

But we are buzzing at present, and the possible return of Salah – to assist the red hot Mane and Origi – bodes very nicely indeed.

Nerves? What nerves! We’ve come through huge matches unscathed in recent times and this one will be no different. Liverpool will win this game and win it well: back the -1 handicap at 10/11.

Post Tags:
Homepage » Match Previews » Liverpool vs Wolves Betting Tips (12/05/19) – Reds Will Hold Up Their End of the Bargain on Super Sunday