If you asked any football manager what they would want from the first game of a new season, you can guarantee that a win would rank highest, closely followed in no particular order by a clean sheet, a good performance in which tactical systems are deployed faultlessly, a few goals scored and your players getting through the 90 minutes unscathed.

By that token, the 4-1 win over Norwich on Friday was a bit of a mixed bag.

Scoring four goals is most welcome, of course, and it was particularly pleasing to see how sharp the likes of Firmino, Salah and Origi were.

The latter pair obliged with goals of their own, while the Brazilian was denied a superb volleyed strike by the flailing limbs of Canaries keeper Tim Krul.

The goal-glut started when Grant Hanley put through his own goal as early as the seventh minute, which helped to settle any new season nerves, before Salah’s opportune strike and a routine Virgil van Dijk header made it three.

Origi netted on the stroke of half-time to make it four, and that was that as far as the contest was concerned.

The second half was something of a non-event, but Norwich did find a consolation through Teemu Pukki. And it was quite alarming how often the Finn and his teammates got in behind our defence throughout the game – the frontman’s movement something of a headache for Joe Gomez in particular.

The injury to Alisson (more on that in a moment) also left something of a sour note, so all in all it was a befuddling return for the Reds. Still, the win is the thing.

Wednesday brings the first chance of some silverware as we tackle Chelsea in the Super Cup. It’s a strange competition this: yes, it’s a recognised continental trophy, but its importance in the grand scheme of things is clearly low in the pecking order.

Still, it’s a return to a favourite stomping ground in Istanbul, and a chance to get one over on the Blues still reeling from their heavy defeat on Sunday.

The major problem for Liverpool right now is Alisson, who went down clutching his calf following a slip on Friday.

The good news is that the club is not talking of any long-term issues, but Wednesday will come too soon for the Brazilian.

“It’s the calf and that’s it. He couldn’t carry on, that’s not a good sign. We have to see,” Jurgen Klopp said in his post-match press conference.

“Wednesday [in the Super Cup], he will not play – with all my experience, I can say that already. He is injured, for sure, so we have to see how much.”

That means a first start for new boy Adrian between the sticks.

How will the manager play this one in terms of team selection? This is a ‘free hit’ of a game, and another opportunity for his players to gain match sharpness against a side that will provide more resistance than Norwich.

And so he won’t tweak things too much, but expect some significant game time for the likes of Sadio Mane, James Milner and possibly even Alex Oxlade-Chamberlain. 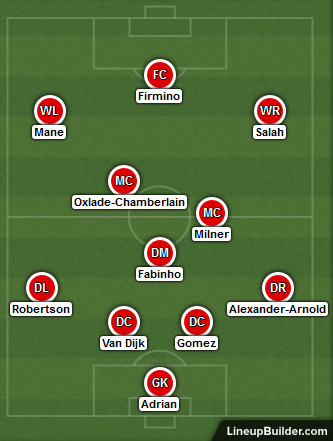 As if to counter the opening sentence of this preview, everything that could have gone wrong for Chelsea and Frank Lampard at Old Trafford on Sunday happened.

They started brightly enough and hit the woodwork twice, but there were some common frailties that the Reds will look to exploit.

A lack of mobility in midfield to prevent the United counter attack was one major flaw – the return of N’Golo Kante will help with that, while at the back Cesar Azpilicueta and Kurt Zouma in particular had shockers.

In fairness, Lampard is hamstrung – if you’ll pardon the pun – by injuries, with the likes of Willian, Hudson-Odoi, Rudiger and Loftus-Cheek are all unlikely to feature on Wednesday.

Yes, there were flaws in our own win on Friday, but we got the three points and Klopp – Alisson aside – has a full squad to call upon.

This is a confident Liverpool side up against a Chelsea team in transition – who, lest we forget, finished a full 27 points behind the Reds last season.

So we simply have to back a Liverpool victory here, for which you’ll get best odds of around 8/13.

The major concern for Lampard will be that Zouma-Christensen central defensive partnership, but with Luiz and Cahill gone he doesn’t have a huge range of options there. Back Bobby Firmino to take advantage by scoring anytime at 7/4.

Post Tags:
Homepage » Match Previews » Liverpool vs Chelsea Betting Tips (14/08/19) – First Piece of Silverware for the Season There for the Taking