Well, that was easy. You never quite know how the Merseyside derby is going to go. Yes, we are flying at the moment and Everton are in the doldrums, but these bloodthirsty rivalries have a habit of bringing the best out of the underdog.

Unfortunately for the Toffees, they were already 0-2 down by the time they got into their stride here, and 2-4 down at the half-time break.

Even with Mo Salah and Bobby Firmino rested, and with Alisson and Fabinho absent, there was still a joyousness to our play that was ultimately rewarded with five goals.

Sadio Mane, fresh from finishing fourth in the Ballon d’Or race, was in unstoppable form, creating goals for Divock Origi and the returning Xherdan Shaqiri within the opening 17 minutes.

The Senegalese star got the goal his performance deserved when he turned home a Trent Alexander-Arnold cross following a flowing move, after Origi had added his second when he got in behind from a Dejan Lovren long ball.

In between there were nothing more than consolation goals from Michael Keane and Richarlison for the visitors, before the second half played out in rather lacklustre fashion.

There was still time for Gini Wijnaldum to add some late gloss to the scoreline, ad a potential banana skin was avoided to keep our eight-point lead intact.

“All the goals were incredible, outstanding. Wonderful goals, sensational passes, super pieces of football. I loved it a lot!” Jurgen Klopp enthused afterwards.

“We needed fresh legs and I had to show my respect to the boys in the squad, that’s all. They proved it. It is much more fun making changes, all of the boys are ready to deliver performances like this.”

He will be hoping for more on Saturday when we travel to the south coast to take on Bournemouth.

You suspect some consideration will be made for next week’s crunch Champions League against Salzburg in the manager’s selection for this game.

Mo Salah and Bobby Firmino will probably come back in against the Cherries, and while he might be loathe too given how well he played on Wednesday it’s possible that Sadio Mane will be given a rest here with Divock Origi pivoting out to the left flank.

In midfield, Jordan Henderson could be the anchor behind Alex Oxlade-Chamberlain and Naby Keita, although Adam Lallana might have thrown his hat into the ring with a decent showing in midweek.

In defence, assuming there were no injuries sustained against Everton the manager might bring in Joe Gomez to give Dejan Lovren a rest. The manager will probably have liked to have wrapped Virgil van Dijk up in cotton wool too, but with Joel Matip sidelined that’s not a possibility.

In goal, Alisson will surely return after his one-match suspension. 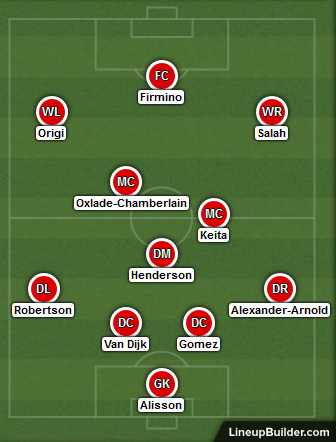 It would be fair to call Bournemouth an inconsistent sort of team.

They go on these little patterns of form where they can look very good indeed – from August to November 2, for example, the only teams to beat them were Manchester City, Leicester and Arsenal.

So they’re not getting thrashed, but that losing streak – matched by their appalling record against ‘big six’ teams – will not be filling their supporters with confidence ahead of this one.

In amongst their tough run has been Eddie Howe’s inability to field his strongest side.

David Brooks, his talisman, has been out all season so far, while Ryan Fraser’s status as a contract rebel is keeping him on the sidelines.

Stanislas, Surman, King, Daniels, Cook and Smith are all missing with injury too, so Eddie Howe must be tearing his hair out at the moment.

Liverpool, strengthened by the return of Salah, Firmino and Alisson, could run riot on the south coast, and at odds of 11/10 we’re delighted to back the Reds with a -1 goal handicap.

The Cherries are generally good for a goal, but they have failed to find the net in four of their last eight, and against a Liverpool defence that is better than the vast majority those percentages get tweaked a little further.

So, if that handicap selection is not for you then maybe a dart at Liverpool to Win to Nil, at 7/5, is of greater appeal.