Some Liverpool fans have taken a rather dim view of the Club World Cup, and view it as an unnecessary distraction from more important matters back on home soil. Certainly, travelling halfway around the world ahead of the typically packed festive fixture list is less than ideal.

But you could see the sheer delight on the players’ faces when Bobby Firmino netted a late winner in the semi-final against Monterrey, and that can only help to re-energise them ahead of the hurdles that will no doubt present themselves in the near future.

And just days after Adam Lallana declared he and his teammates were ‘addicted’ to winning trophies, the Reds now have a chance to earn themselves the tag of the best club side in the world should they see off Flamengo in the final on Saturday.

Initially we looked a bit out of our comfort zone in the semi-final against the Mexicans, with the oppressive heat in Doha not exactly lending itself to energetic, free flowing football.

Nevertheless, when Naby Keita raced onto Mo Salah’s through ball to slot home after 12 minutes it looked as though it might be a case of business as usual.

That was the way it stayed for the bulk of the match, and it looked as if one moment of magic would be enough to separate the sides.

And so it proved when Bobby Firmino, who only strode onto the pitch five minutes earlier as a late substitute, poked home an injury time winner from Trent Alexander-Arnold’s cross.

The final whistle blew shortly after, and the Reds were into the final of the Club World Cup for the first time.

What can we expect from Sunday’s final then? Who knows, but Liverpool will not take a backward step in their quest to be crowned best in the business.

A quirk of fate meant that Jordan Henderson had to fill in at centre back in the semi-final, and Jurgen Klopp will be desperate for Virgil van Dijk to shake off his illness that forced him to take a watching brief there.

Joel Matip, Dejan Lovren and Fabinho are all injured, so it’s Van Dijk or nothing in the heart of the defence for the Reds.

Elsewhere, we would expect Trent Alexander-Arnold to come back in at right back, while Sadio Mane and Bobby Firmino should return to the starting eleven.

Naby Keita is undroppable in midfield, and could well be joined by Jordan Henderson and Alex Oxlade-Chamberlain in the middle of the park. 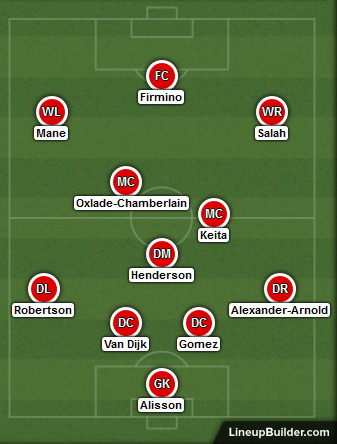 The Brazilians dominated their Serie A championship this season, ending up as champions by a comfy sixteen point margin.

They blitzed 86 goals in total – 22 more than any other side, to capture their first title since 2009 and also the Copa Libertadores crown.

That confidence was in evidence in their Club World Cup semi-final against Al-Hilal, especially when they found themselves 0-1 down after just 18 minutes.

But Flamengo rallied after half-time, with Giorgian de Arrascaeta netting the equaliser after 49 minutes before Bruno Henrique headed them into the lead.

An own goal from an Al-Hilal defender gave the scoreline a flattering look for the Brazilians, who managed to win 3-1 despite recording just two shots on target.

This game represents a clash of cultures between two sides deploying completely different styles of the beautiful game.

Flamengo will be aggressive and defence-minded, preferring to spring out on counter attacks than grasp the nettle on the front foot.

The temperature in Doha will barely get below 20°C at night, and so that will give an air of sluggishness to proceedings too.

Liverpool are a best price of 4/9 to win this one, and you suspect on the balance of what has been seen so far in this tournament that is fair game.

But it’s the goals markets – specifically a lack of them – that interests us here. Klopp will make his three allotted substitutions to keep his players fresh, and the disruptive nature of the Brazilians and their tactical fouls could turn this contest into something of a grind.

Post Tags:
Homepage » Match Previews » Liverpool vs Flamengo Betting Tips (21/12/19) – Wouldn’t It Be Nice to Be Crowned Champions of the World