In the end, it was much ado about nothing for Liverpool despite the fraught circumstances of the 2-0 win over Salzburg in midweek. Defeat would have the defence of our Champions League crown end rather prematurely, and the Austrians came out of the traps fast with cruel intentions in mind.

Led by the precociously-gifted Erling Braut Haland, they couldn’t quite make the breakthrough and, after weathering the storm, we were able to come out in the second half and secure the win with two goals of our own.

Naby Keita, who has been in outstanding form of late, netted the first after 57 minutes when he headed home Sadio Mane’s pinpoint cross.

And the double-whammy was completed barely 60 seconds later when Mo Salah rounded the Salzburg keeper and slotted home from the tightest of angles.

The victory means that we now go into the round of 16 as one of the seeded teams, meaning that – on paper at least – we should get a ‘easier’ draw in the knockout phase.

When you look at our possible opponents – Real Madrid, Atalanta, Atletico Madrid, Borussia Dortmund and Lyon – you could perhaps make an argument either way.

Still, December continues at pace, and with Christmas just around the corner the fixture list has gifted us a steady home date against Watford on Saturday.

It’s an agreeable fixture given the Hornets’ form – one win in sixteen this term tells the tale. But with Nigel Pearson now in charge you know that Watford won’t lack for endeavour, and so we’ll have to turn up and go hard at Anfield on Saturday lunchtime.

Dejan Lovren payed through the pain barrier in Austria, lasting 53 minutes before hobbling off with symptoms similar to those experienced against Bournemouth.

“We hope that it’s exactly the same as last time,” Jurgen Klopp said afterwards. “He felt something and we made the decision.

“It felt similar like last time, that’s it. We have to see.”

It’s likely that the Croatian will be given more recovery time and not feature against Watford, with Joe Gomez stepping in to deputise.

There is a problem with Adam Lallana too, while Joel Matip and Fabinho are eyeing a return in time for the post-Christmas games.

Klopp will be keen to give Keita another game if his body can take it – the Guinea international hasn’t played all that much this term. He might join Gini Wijnaldum and James Milner in midfield, with Jordan Henderson’s workload managed here.

Up front, it appears as though Salah has recovered fully from his ankle problems, and so the usual terrible trio will start as we look to maintain our healthy cushion at the top of the Premier League table. 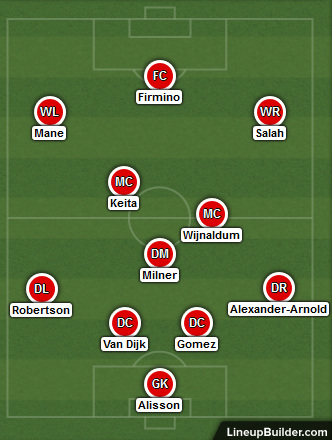 It’s all change, again, at Watford.

They have now appointed their third manager of the season in Nigel Pearson, and the former Leicester boss oversaw a battling 0-0 draw with Crystal Palace in his first outing in the dugout.

But this is a Watford side so low on confidence and belief, and while Pearson can make them more organised and diligent in their work, he can’t wave a magic wand to get his squad back to their best overnight.

Sixteen games, one win, nine defeats: the Hornets have failed to score on nine occasions this term. Pearson, known for his pragmatic approach, is unlikely to change that any time soon.

At a absolute best price of 1/5, a Liverpool win is simply too short to back outright here.

But the stats make it easy for us, because we know the chances of Watford finding the net at Anfield are slim.

And this is where the value lies: Liverpool to Win to Nil is available at evens, and that seems an excellent price to us.

If you think the Reds are going to keep a clean sheet then that offers up a couple of other options: you can squeeze out some profit from the 1/2 on Liverpool with a -1 handicap.

And let’s push the boat out – it is Christmas after all – by dutching a couple of correct scores: 2-0 and 3-0 to Liverpool are both available at 7/1, so backing both still leaves enough profit to fill the festive stockings of your loved ones.

Post Tags:
Homepage » Match Previews » Liverpool vs Watford Betting Tips (14/12/19) – Back to Basics with a Bang for the Reds