How’s about that for a slice of Premier League history? Following the 2-0 win over Sheffield United on Thursday, Liverpool have gone a full calendar year without tasting defeat in the English top-flight.

It’s an extraordinary achievement, and one born out of an incredible togetherness in the squad, some moments of individual brilliance and, as is required, a slice of luck from time to time.

But, the real quiz is if we are lifting the Premier League trophy come May of this year.

“I am really happy and really proud of the boys,” Klopp said when questioned about the lengthy unbeaten run. “We should not take things like this for granted. I do not take it one second for granted [what the team have done].”

The year-long streak was confirmed with a battling but straightforward victory over the Blades, who once again proved to be a worthy adversary.

There was an element of luck to our first goal – like we say, all teams need a dash of that – when United’s right back George Baldock took a tumble and allowed Andy Robertson to burst clear. He teed up Mo Salah, who scored one of the easiest goals of his time in a Liverpool shirt.

From there on in it was almost exclusive Reds dominance, with 75% possession and 19 shots at goal telling the tale of the tape.

However, we could only fashion one more goal courtesy of Sadio Mane, who slotted home after 64 minutes after being played in by Salah.

It was a victory that maintained our 13-point advantage at the summit of the table, and that’s a lead we can park for now with an FA Cup clash with Everton on the cards at Anfield on Sunday.

The growing injury list, however, is definitely something of a concern for the manager.

Speaking of Keita’s injury in the warm-up ahead of the Sheffield United game, Klopp said: “We have 13 players to go through this period and now we have 12. Takumi Minamino coming in makes it 13 again.”

When pressed upon his possible team selection against Everton, he remarked: “I will do what I think is right. Some things I will decide by myself, some things the medical department will tell me.”

We know who won’t be playing, but trying to decide who will come in is more difficult.

Klopp would love to rest some of his stars, but options are limited and so this current back four – Alexander-Arnold, Van Dijk, Gomez and Robertson – will presumably be pressed into action. That said, James Milner could fill in at right back for TAA, who the manager is reluctant to overwork.

In midfield, an opportunity will surely be given to Adam Lallana, who may partner Jordan Henderson and Gini Wijnaldum.

In attack, Divock Origi will come in – probably for Bobby Firmino, who looked leggy against the Blades, while Minamino will make his Anfield bow from the bench. 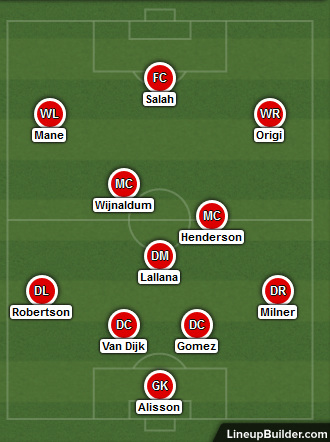 The Everton we beat at the start of December will not be the side we tackle on Sunday.

The Toffees were given a jolt of life by Duncan Ferguson in his caretaker charge, and since Carlo Ancelotti has come in they have improved yet further.

Draws with Manchester United and Arsenal have been followed by victories over Burnley and Newcastle, and despite the defeat they also gave an excellent account of themselves in the 1-2 at Manchester City last time out.

In our team selection above we have been quite optimistic about the line-up we expect Klopp to field: of course, he could make many more changes than those we have predicted.

If he does, this could be a much closer match than the bookmakers are anticipating, with Liverpool a decent favourite at 6/5.

That said, if this was a league game there is absolutely no chance that we would be an odds-against price, and when the team news is revealed anything resembling our strongest starting eleven then those odds will tumble.

As such, we’re happy to recommend a bet on a Liverpool win, because this will surely still be a strong Reds side.

Nothing else appeals in the betting markets given the uncertainty.