As expected, Atletico Madrid were at their ‘horrible’ best in the 1-0 win over Liverpool o Tuesday night. They pressed, they harried, they were hard in the tackle and they displayed all of the trademark spoiling tactics we have come to expect from a Diego Simeone side.

But, it was enough to get them the win when Saul Niguez squeezed home in the fourth minute, and now the Reds have it all to do in the return fixture.

However, it’s not as if we need to do be fearful of them bagging an away goal, because they won’t press at Anfield – they will simply sit in and try and grind out a result. And that means it’s very much game on in the second leg.

What was concerning was that we were beaten at our own game, to some extent. Atleti were electric when it came to pressing us in possession, and we were unable to connect any passes of real authority as the Spaniards were quick to spoil everything we did.

Sometimes the stats don’t quite tell the full story, but here they do: we had 73% possession of the ball, and could not muster a single shot on target.

In the end, Sadio Mane was substituted at half time and Mo Salah withdrawn in the second period, which tells you all you need to know about Atleti’s supremacy.

Still, all is not lost and back on home turf, in front of an impassioned Anfield roar, there could yet be plenty of twists and turns in this game.

There’s a good few days off now before we take on West Ham on Monday evening, and you wonder if the beleaguered Hammers will feel the full force of the frustrated Reds.

You suspect that Jurgen Klopp would be determined to dust his troops down and send the same eleven out to unleash their fury on West Ham.

But that may not be possible, because Jordan Henderson went off in the second half clutching his upper leg. “Hendo felt his hamstring, unfortunately. We have to wait. He was not too concerned but enough to go off obviously.”

You wouldn’t expect the England man to be risked if there is any concern whatsoever about that, and it’s possible that Naby Keita – rather than James Milner or Alex Oxlade-Chamberlain – will come into the side as a result.

From West Ham on Monday we then take on Watford on Saturday, so Klopp may decide to tweak his eleven accordingly. James Milner for Trent Alexander-Arnold and Joel Matip for Joe Gomez are just two other rotations that might be considered. 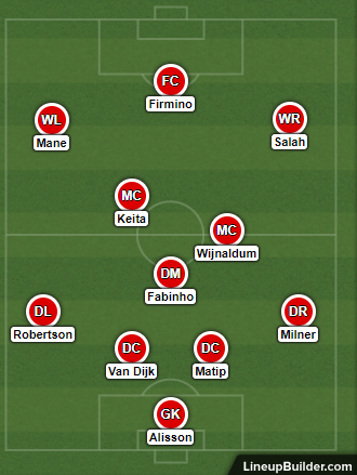 The appointment of David Moyes has made very little difference to the fortunes of West Ham, who are well and truly embroiled in a relegation battle.

They’ve lost six of their last nine league games, and that run has only been briefly halted by a win over Bournemouth on New Year’s Day and draws with Everton and Brighton.

They’ve conceded eleven goals in four games, and you only have to look to the 0-2 defeat to Manchester City on Wednesday to see why. They showed no ambition whatsoever, decamping to the edge of their own penalty area and basically looking to keep the scoreline respectable.

If they do that against Liverpool on Monday night, they could pay the ultimate penalty.

There’s no other way to look at it: Liverpool should win this game, and they should win it well.

You see it quite often when a team suffers a hurtful defeat that they bounce back straight away, and with the Hammers bringing very little to the party that could well be the case here.

There’s no pressure on Liverpool in Premier League games, to some extent, and while a lack of intensity could become a problem this is a Reds side that will be desperate to get back to winning ways.

West Ham have lost three of their last four games by a margin of two goals or more, so why wouldn’t you expect Liverpool to do likewise here?