It was almost inevitably going to happen, wasn’t it? Any hopes of the perfect ‘invincibles’ season came to an end as Liverpool were downed by red-hot Watford on Saturday evening. Given the Hornets’ recent form to say their 3-0 victory was a surprise would be something of an understatement, but Nigel Pearson rallied his troops and they delivered an epic display.

Their midfield trio fought like lions, while in wide areas Gerard Deulofeu – before he was substituted through injury – and Ismaila Sarr were absolutely electric.

Indeed, it was Sarr who proved to be the major difference maker, with his pace ad direct running giving the Reds backline a nightmare of a time at Vicarage Road.

We have fallen behind in games throughout the season, but usually found ways to navigate our way back into the fixture. But it just didn’t seem likely against Watford: they were rampant in attack, cheered on by a rapturous home crowd, and our attacking players never really got a stranglehold on the game. In midfield, the absence of Jordan Henderson was clear for all to see.

Having gone 0-2 down, Jurgen Klopp took action by throwing on Divock Origi and Adam Lallana for Gini Wijnaldum and Alex Oxlade-Chamberlain, but it was to no avail and it’s not as if we created a host of chances to look back on with regret.

“They did exactly what they wanted to do, we did not. That’s how football works,” the manager said afterwards. “You have to accept it, it’s not so easy, but it’s the proof we were not good enough. It’s always very difficult.”

It was a shame to see that unbeaten run come to a end, but you suspect – or hope, at least – that no major damage has been done to our season in defeat.

The players won’t have long to dwell on being halted by the Hornets as it’s straight back into action on Tuesday evening against Chelsea in the FA Cup fifth round, although once again it is likely that a youthful Reds eleven will be heading to Stamford Bridge.

The big question that Klopp faces ahead of this game is whether he keeps faith in the young guns and fringe players that have fired Liverpool to the fifth round of the FA Cup, or – with the business end of the competition in sight – he decides to bring in some more experienced heads.

Generally, we expect him to opt for a youthful side once more, although Klopp has ruled out fielding the same starting eleven as that which defeated Shrewsbury in the last round. “From the Shrewsbury team for sure there will be boys in the squad, and who will start then, we will see,” he said. “If they will play tomorrow night, I don’t know, we will see that, for sure not all of them.

What is more likely is that some more experienced heads will come in. Adrian could feature in goal, with Dejan Lovren continuing at centre back alongside Joel Matip and James Milner in at left back.

Ki-Jana Hoever may replace Trent Alexander-Arnold at right back, while in midfield Adam Lallana could operate in the trio alongside young duo Pedro Chirivella and Curtis Jones.

In attack, Divock Origi and Takumi Minamino seem likely to start and Xherdan Shaqiri may be fit enough to return on the right flank.

One player definitely not involved is Harvey Elliott, who will line up for the Under-19s against Benfica in the UEFA Youth League. 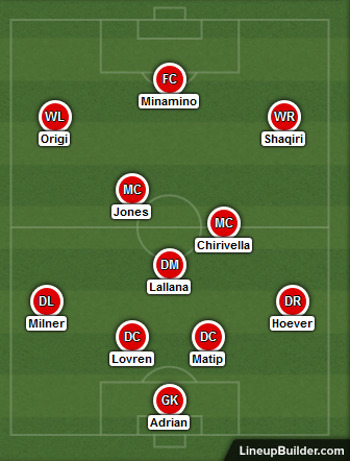 With their Champions League campaign all but over, Chelsea can now focus on domestic league and cup matters.

Their charge for a top four finish has stalled of late, and it’s just one win in six Premier League starts for Frank Lampard’s side.

They’ve conceded two or more goals in four of their last five starts too, which will unsettle the manager, and even the return to the starting eleven of Olivier Giroud has only improved matters a small amount.

We’re about to do something that we haven’t done all season long.

This could be the only time that we bet against Liverpool all season, but with a starting eleven starting here we are vulnerable against a Chelsea side that will be chomping at the bit for some cup glory.

And so yes, the price of 5/4 on a home win here is appetising value, and can be doubled with Both Teams to Score at odds of 10/3 for a bet of some substance.