Well, dreams of an incredible double will have to be put on hold for another season. The defence of our Champions League crown came to a bizarre end against Atletico Madrid on Wednesday night in a 13 minute spell in which Liverpool completely unravelled.

In stark contrast, the 90 minutes of normal time went by serenely and without any great alarm. We dominated proceedings, and after creating a number of decent chances the breakthrough was finally made on the stroke of half time by Gini Wijnaldum, who headed home to level the tie at one-apiece.

Most pundits and even the most pessimistic of Reds fans expected us to complete the victory in the second half, with Atletico sitting deep and offering very little in the way of a counter-attacking threat.

And boy, did we come close on more than one occasion, and none more so than when Andy Robertson’s header hit the woodwork.

We huffed and we puffed but we could not find a way past the inspired Jan Oblak in the Atleti goal. He made nine saves in all and was undoubtedly the man of the match.

The game moved into extra time and we were still confident – rightly, it seemed, when Bobby Firmino ended his goal-hoodoo at Anfield to fire us into the lead.

Just as we were thinking of a celebration at the end of another famous European night, Adrian – in for the injured Alisson – made a complete hash of a clearance and Marcos Llorente was given the simply task of slotting home, giving Atleti an all-important away goal.

We had no choice but to press forward and throw the kitchen sink at the Spaniards, and it really was a case of all-or-nothing.

Unfortunately, hopes turned to tatters when Llorente scored again to give Atleti what was an unassailable lead, before Alvaro Morata completed the rout in injury time.

The Liverpool players, and Jurgen Klopp, looked understandably broken-hearted at the end, but there is some crumb of comfort in knowing that a mouth-watering clash with Everton on Monday evening gives us the chance to get back in the saddle in comprehensive fashion.

The only current injury doubt in the Liverpool squad is Alisson, whose muscle injury is serious enough for Klopp to confirm that he won’t return until after the international break.

Otherwise, the manager has a full team to work with, although you suspect he will make changes for the short trip across Stanley Park given that some of the squad played a heartbreaking 120 minutes in midweek.

The likes of Trent Alexander-Arnold and Joe Gomez may be given the evening off, while Fabinho should also be restored to the midfield – probably at the expense of Jordan Henderson, who played more than 100 minutes despite barely having recovered from injury.

In attack, you do worry about the number of minutes played by Sadio Mane of late, so he may be given a watching brief from the subs’ bench with Divock Origi deputising. 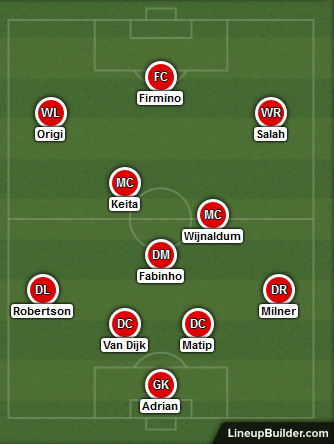 The Carlo Ancelotti honeymoon period has lasted plenty of long enough, but there have been cracks in the façade lately.

A tough run of fixtures has seen Everton lose 2-3 and 0-4 to Arsenal and Chelsea respectively, with a 1-1 draw with Manchester United the meat in the sandwich.

The Toffees had been going well prior to that, which perhaps shows they are flat-track bullies – coming unstuck against the bigger boys.

Everton have been playing with a sort of 4-4-2 formation of late, with a cramped midfield shaped into a diamond, and that should provide our full backs with plenty of opportunities to find space out wide.

That will allow Salah and Origi – assuming they are the starting wingers to press high and centrally against Everton’s centre backs, creating some nice overloads there too.

Make no mistake, the Toffees will up their game here as they always do for the Merseyside derby, but this is a Liverpool side that is hurting and desperate to dish out some instant revenge following the events of Wednesday evening.

All of which makes Liverpool’s price of 3/4 all the more alluring, and such is the strength of feeling in the camp you suspect that even if Klopp does make changes, the -1 handicap line on Liverpool at 2/1 is also worthy of a second look.