Crisis, what crisis? It’s amazing how quickly so-called desperation can be extinguished with a simple win in football, especially when other results go your way and you can, in theory, secure the Premier League title with weeks to spare.

Our 2-1 victory over Bournemouth on Saturday took us 25 points clear at the summit of the table, and with Manchester City’s defeat at neighbours United on Sunday that’s a cushion that remains in place. Pep Guardiola’s men play Arsenal in midweek, and defeat against the Gunners – and against Burnley at the weekend – means that we could mathematically win the title at Everton on Monday evening. Imagine that!

That’s all in the future though, and it’s a scenario that was made possible by the triumph over the Cherries at Anfield on Saturday – a game which got off to a rather inauspicious start.

Callum Wilson fired the visitors ahead in the ninth minute, and after suffering three defeats in a fortnight you could forgive the home faithful for thoughts along the lines of ‘here we go again’.

But any doubts of another major wobble were assuaged when Mo Salah levelled after 24 minutes, and then Sadio Mane raced onto a Virgil van Dijk through ball barely ten minutes later to hand the Reds the advantage.

And that was the way it stayed, thanks to James Milner’s fantastic goal line clearance to deny Ryan Fraser and Mane’s shot bouncing back off the crossbar rather than into the net.

But the win is the thing, and after some disarray of late the three points was most welcome.

In his post-match press conference, Jurgen Klopp touched upon the notion of confidence. “We have said before, confidence is not something that you get, put in your pocket and keep for the rest of your life. It comes and goes. You need that feeling where things work out.”

It’s interesting to hear the manager hinting at the difficulties of the past few weeks, but with the Premier League title all but assured we can now focus intently on Wednesday’s Champions League second leg clash with Atletico Madrid.

Do you want the good news or the bad news first?

Let’s start with the bad: Alisson’s muscle injury is likely to keep him out for the next few weeks.

On the flipside, the good news is that Jordan Henderson has resumed full training, and should be able to start on Wednesday.

Andy Robertson, who was essentially rested against Bournemouth, is also fit enough to return against the Spaniards, handing Klopp pretty much a full deck to play with.

The back four and the front three pick themselves at the moment, and so the only issue is getting the balance right in midfield.

We can’t be too attacking – if Atleti score, we will need to find the net three times, but of course the onus is on breaking down the stubborn resistance of the Spaniards.

Fabinho and Henderson will start, and you wonder if the more dynamic Alex Oxlade-Chamberlain will be selected ahead of Gini Wijnaldum at the head of the trio? 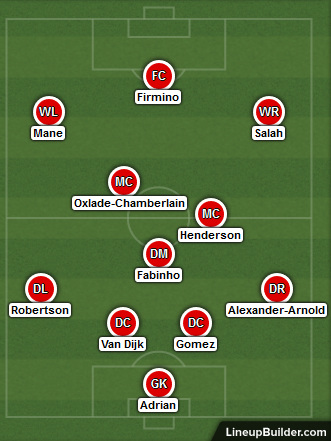 We can fixate ourselves with the so-so form of Atletico Madrid in the Spanish La Liga, however we know that in the Champions League they are a different animal altogether.

On the domestic front, Atleti sit a below-par fifth, and while they have only lost four times this term they have also only won 11/27 in La Liga – draws have been their major bugbear. Still, that shows how tough they are to beat.

And then we consider their outrageous record in the Champions League: since the start of the 2018/19 campaign, they have lost just four of fifteen games played in the competition.

But that quarter have all come on the road, and that’s why we should have confidence on Wednesday.

With neither side wanting to concede a goal – especially early on – in this tie, this game will surely get off to a more conservative start than we might expect for a European night at Anfield.

But we will enjoy plenty of the ball and then it is down to our more creative types to make something happen with it.

It’s difficult to see this being a goal-fest then, and quotes of 4/5 are about right from the bookies on Under 2.5 Goals.

We’re going to take a direct approach with this game: we don’t think Atleti can hurt us, and so let’s dive straight in with the 2-0 correct score in Liverpool’s favour at 6/1.