If there’s one life lesson that football teaches you, it’s that sometimes you just have to shrug your shoulders, move on and forget about things. The Expected Goals count for the Liverpool vs Burnley game on Saturday read 1.96-0.78 in the Reds’ favour, and while not may not man much to some readers it basically confirms the dominance of the home side.

For traditionalists, stats like 73% of possession, 23 shots at goal, nine shots on target and 12 corners probably do a better job of explaining how dominant Liverpool really were.

But there’s only one set of figures that really matter: the final score. And that read 1-1 following a encounter in which the Reds were unusually wasteful in front of goal.

When Andy Robertson fired Liverpool in front after 34 minutes, it seemed an almost foregone conclusion that they would extend their 100% record at Anfield this term to within a touching distance of going on a perfect run throughout the campaign.

But Burnley, who created only two chances in the whole game, equalised through Jay Rodriguez and even could have nicked all three points when Johann Berg Gudmundsson slammed his shot against the bar.

The takeaway point was how many chances the Reds spurned to extend their winning form on home soil. Mo Salah in particular had an afternoon to forget, and even when the Egyptian was more accurate with his finishing the Clarets keeper Nick Pope was in excellent form.

And even when Pope was beaten, the frame of the goal still denied Bobby Firmino the chance of extending our early lead.

This was one to forget then, albeit for reasonably positive reasons, and we move on to Wednesday’s mouth-watering clash with Arsenal at the Emirates mindful that the hosts will be hurting after losing the North London derby against Tottenham on Sunday.

With a couple of key injuries in the squad, keeping as many players fit and as fresh as possible is the name of the game as we enter the final throes of the season.

Jordan Henderson is out for the rest of the campaign – as confirmed by Jurgen Klopp himself. “He won’t play again this season, but I am pretty positive he will start the new season for us. It’s not cool but the best we could get.”

Joel Matip is also out for the foreseeable future with an ankle injury, and he has been joined on the sidelines by James Milner, who was left out of the squad against Burnley. “Millie had this little muscle injury 2-3 weeks ago. He trained but he felt something. He is not injured, but we should not take the risk so he is not in the squad,” Klopp said.

So with Matip and Henderson out and Milner unlikely to feature against the Gunners, Klopp will have to shuffle his deck again. We expect Joe Gomez and Virgil Van Dijk to continue at centre back, with Alexander-Arnold back in to replace Neco Williams.

Getting the balance right in midfield will be key, and so in Henderson’s absence we expect Fabinho to continue at the base of the trio. Alex Oxlade-Chamberlain may be set loose against his old club, and that will probably leave a choice between Naby Keita and Gini Wijnaldum for the other spot – we expect the latter to get the nod. 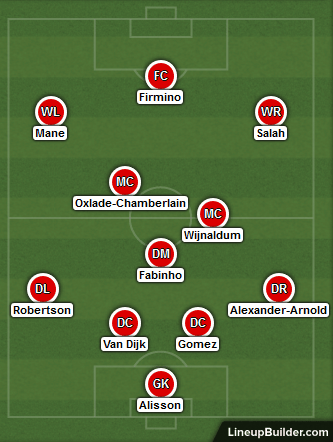 A switch to three at the back has served Mikel Arteta well as he arrests the slide that left Arsenal looking like their season was going to tail off into insignificance.

Bad defeats to Manchester City (0-3) and Brighton (1-2) triggered the shift in formation, and since then the picture has been much brighter with wins over Southampton (2-0), Norwich (4-0) and Wolves (2-0) and a draw with Leicester (1-1).

The only blemish was the 1-2 reverse at the hands of rivals Spurs, although Arsenal were good value for a point at least.

The bookies have Liverpool down as the 10/11 favourites here, and if the Reds play anything like they did against Burnley here you would have to say that is a fair price.

Three at the back has worked for the Gunners, but they will be matched up man for man defensively here and you would expect Salah and co to get the better of a defensive line that features the ever-unpredictable David Luiz and Shkodran Mustafi.

At the other end, Arsenal have scored two or more in four of their last five games, so they are showing plenty of quality in front of goal.

But everything into the mixing pot, and we come up with Liverpool to Win & Both Teams to Score at 9/4.