In a season in which this Liverpool squad has carved out their own slice of history, you could be left wondering what is the motivation that is going to drive them on until the end of the campaign. Jurgen Klopp has stated resolutely that the abundance of records that the Reds could break are NOT a factor in his thinking, and yet there must surely be a temptation to consider the kindness with which history will treat a team that wins 100 points in a season or who wins all of their home games played in a single campaign?

The performance level in the 2-0 win over Aston Villa last time out at least hinted that the players have got their eyes on the prize. Again, this wasn’t vintage, free-flowing Liverpool by any means, and we had to wait until 71 minutes for the first goal to go in. But the willingness and the appetite to grind out the victory bodes very well for the remaining five games of the season.

Sadio Mane fired the opener home following good work from Naby Keita, and as Villa pressed for a late equaliser it was left to Curtis Jones to put some gloss on the result when his shot was deflected home.

The Villains looked dangerous on the break at times, but that’s their style and there was nothing really to worry about from a Reds perspective.

From potentially record-breaking home form to arresting the slide on the road. We’ve gone three without a win on our travels now, conceding seven and failing to net a single goal ourselves. The trip to Brighton on Wednesday represents a fine opportunity to overcome that concerning situation.

Again, it’s a leap into the unknown as far as second-guessing Jurgen Klopp’s team selection is concerned.

With just 72 hours between the Villa game and this trip to the south coast, changes are likely – it’s just trying to work out who and where!

We know that Joel Matip and Dejan Lovren are out injured, and so Joe Gomez will continue at centre back alongside Virgil van Dijk. And will Neco Williams be given a start ahead of Trent Alexander-Arnold?

Andy Robertson picked up a knock in the dying embers of the game, but he has said he is fine and ‘hopefully he [Klopp] picks me’. With James Milner out, that is much more likely.

Fabinho played an hour against Villa and Jordan Henderson and Gini Wijnaldum 30 minutes or so each, so that is the probable midfield three, while up front Sadio Mane could be given the evening off – Takumi Minamino is the probable deputy. 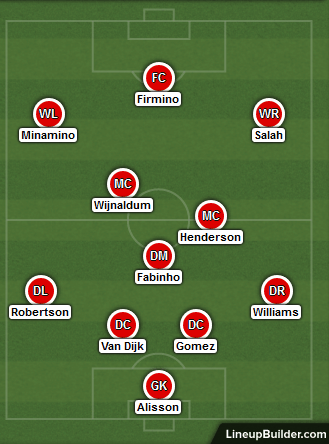 In the thick end of the relegation dogfight prior to the season’s suspension, Brighton’s form since has given them plenty of reasons to be cheerful.

They opened up their resumption with a huge win over Arsenal, and the 0-0 draw with Leicester was very much on the ‘one point gained’ end of the spectrum.

Defeat at Manchester United would have hurt, but a 1-0 triumph in the proverbial six-pointer against Norwich last time out will have restored their faith.

The Seagulls keep things tight and challenging for their opponents, and they will be looking to replicate that formula against the Reds on Wednesday.

The problem with having to rotate your squad so liberally is that it can stifle your attacking flow and rhythm, with new faces having to slot in and hit the ground running – not aided by the considerable period of time off, either.

That perhaps explains why we haven’t quite hit top gear in an attacking sense yet – a few moments against Crystal Palace aside – and that loss of vibrancy is perhaps the key factor informing our bets for this game.

In fact, we can take the contrarian approach: Over 2.5 Goals is odds-on with the bookies, but there is certainly a case for taking the 6/5 about the ‘unders’.

Do Brighton have enough to hurt us from a defensive perspective? We’re not convinced by that, and it’s telling that they have only scored two or more goals in 9/33 this term – and just once since the restart.

And so that helps to make up our minds about the rest of our betting tips: let’s Dutch the 1-0 and 2-0 correct scores in Liverpool’s favour at 15/2 and 7/1 respectively.