Well, let’s draw a line under that and move on, shall we!?

When Manchester City’s players gave Liverpool a guard of honour ahead of their clash on Thursday, you could almost see the eye of the tiger on the faces of Pep’s men – they wanted to send a message to the Reds that, next season, they will be doing all they can to regain the Premier League trophy.

And they played with real verve in their 4-0 win, with Liverpool chasing shadows for large swathes of the game.

There will be lots of talk about a literal and metaphorical ‘hangover’ for Jurgen Klopp’s men following their raucous title-winning celebrations, but the German was apoplectic when Sky Sports’ Geoff Shreeves insinuated there was a lack of intensity about the Reds.

“If you want to lead the story in the direction that we were not focused on that game, then do it,” he said, clearly irritated. “I saw a brilliant attitude. I saw fight. We didn’t behave like somebody who became champions a week ago.”

You suspect Klopp gave his men the hairdryer treatment after Thursday’s debacle, because other than a bright period at the start of the game when Mo Salah hit the post, we were second best in most departments.

Goals from Kevin de Bruyne, Raheem Sterling, Phil Foden and an own goal from Alex Oxlade-Chamberlain gave City the win, and Liverpool’s players left the pitch at the Etihad Stadium with their tails fairly between their legs.

“We lacked fluidity, that’s for sure. And in some 50-50 situations they were quicker than us in mind,” Klopp admitted. “They used their chances and we didn’t.”

There could well be a reaction from Liverpool on Sunday when they welcome Aston Villa to Anfield. Champions by name, the Reds are champions in spirit too and that may well be bad news for the Villains, who are battling desperately to avoid relegation.

Will Jurgen Klopp make wholesale changes for the game on Sunday?

Some players will have to play – with Joel Matip out for the season and Dejan Lovren struggling with a knock, presumably Virgil van Dijk and Joe Gomez will start at centre back.

You sense that Klopp is eager to unleash some of his young stars, and so there’s a chance that Neco Williams and Curtis Jones will be given a start on Sunday.

Others – Fabinho and Sadio Mane – might also be given the afternoon off, or at least a berth on the substitutes’ bench, but at this point of the season and with the Premier League trophy already in the cabinet, we are at this point taking educated guesses at what our starting eleven might look like. 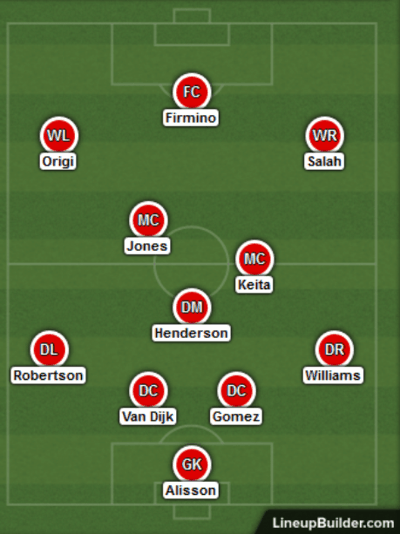 There was a feeling that the break in the season due to the coronavirus pandemic might actually help teams struggling at the wrong end of the table – they could regroup, get players back from injury and work on tactical tweaks to make them more effective.

However, that hasn’t actually proven to be the case, and Aston Villa are one side that hasn’t kicked on since the resumption of the campaign.

They have picked up just two points from their four games so far, with draws against Sheffield United and Newcastle United at least offering a glimpse of positivity.

But defeats to Chelsea and Wolves – albeit by single goal margins – have done little to shake the feeling that the Villains are doomed.

And their record against top six teams this season so far? W0 D1 L9, with a goal difference of -20. It hardly instils confidence, does it?

If we use their last eight games as a cross section, Villa haven’t won since February 1 and have lost six of those – conceding two or more goals in five of those.

Interestingly, they have netted in 50% of those outings, and so perhaps goals will be the order of the day at Anfield on Sunday.

Liverpool are priced at 1/3 with the majority of sportsbooks – that’s an implied probability of 75%, meaning that the bookies think the Reds win this game on three out of four occasions (hypothetically speaking, of course).

Are those true odds? You would certainly say so, and therefore Liverpool to Win & Over 2.5 Goals at 10/11 seems to be a value play to us.

We’ve mentioned that we’re expecting some changes to the starting eleven too, and those lend themselves to Anytime Goalscorer bets. A couple of selections appeal – Origi and Minamino are decent prices, but how about the 11/10 about Bobby Firmino to find the net at anytime?